Finali Mondiali: Lebed and Mancinelli get the show going at Mugello 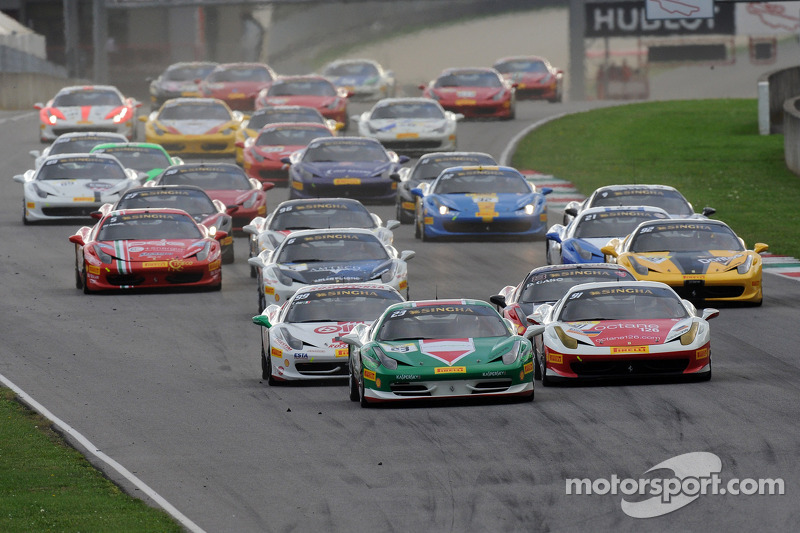 The Ukrainian driver, Andrii Lebed, took Race 1 in the Coppa Shell, while his Italian colleague, Daniel Mancinelli, triumphed in the Trofeo Pirelli category.

Mugello, 8 November – Andrii Lebed and Daniel Mancinelli are the first two names to appear on the winner’s roster at the 2013 Finali Mondiali.

The Ukrainian driver took Race 1 in the Coppa Shell, while his Italian colleague triumphed in the Trofeo Pirelli category. Lebed and Mancinelli took almost identical paths to victory: both started from pole, maintained the lead after the start and then kept it all the way to the chequered flag.

While who would win in both races never seemed in doubt, there was still plenty of excitement as can be seen from these brief race reviews.

Race 1 Coppa Shell - The first Coppa Shell Europe race, in which competitors from the North American series also took part, was very spectacular. Starting from pole, Lebed kept the lead throughout, but he could never relax, given that Italy’s Erich Prinoth was always right there with him all the way to the chequered flag. On the third step of the podium was another Italian, Thomas Gostner, who drove a solid race, free of errors.

Giosue Rizzuto showed plenty of grit in a spectacular duel, which however did not have a happy ending, given his race ended in the gravel. It was also very close among the North American competitors: Onofrio Triarsi appeared to by flying to victory after a climb up the order saw him reach fifth place overall, but an off-track moment put him out of the reckoning, so the win went to Harry Cheung, with John Farano and Alfonso Celis completing the podium. With Triarsi knocked out of the running today, Farano now has a solid chance of taking the Trofeo Pirelli title tomorrow, as there are only four points separating the two men. It’s already game over in the North American Coppa Shell, where Marc Muzzo has won the title and he also took the victory today, ahead of James Weiland and Henrik Hedman.

However, it’s a three way fight in the European Coppa Shell, where leader Dirk Adamski will have to keep an eye on not only David Gostner, but also Lebed, who is again looking like a strong title contender after today’s win.

Race 1 Trofeo Pirelli –The first European Trofeo Pirelli race of the weekend, run alongside the Asia Pacific one, saw Mancinelli win and thus reduce the gap to the series leader, the Ukrainian, Sergei Chukanov, who could only finish sixth today. While the Motor Piacenza driver had quite a comfortable time of it, the battle behind raged fiercely between a quartet made up of Austria’s Philipp Baron and the Italians, Dario Caso, Stefano Gai and Lorenza Case.

All four were glued together but it didn’t stay like that to the end. The key moment came with around four minutes to go, when Gai crashed heavily into the backmarker Eric Cheung and had to pit. The driver was uninjured, but his 458 Challenge car will need a lot of work overnight to get it ready for tomorrow. The race thus ended behind the Safety Car, with Mancinelli first ahead of Baron, Caso and Case.

Of the APAC driver, the win went to Thailand’s Pasin Lathouras, who got the upper hand over the favourite Max Blancardi, thanks to a great passing move in the final moments. On the third step of the podium was Australia’s Steve Wyatt, the recent winner of the Asian Le Mans Series with the AF Corse team. In the Coppa Shell, Lebanon’s Toni Hanna triumphed ahead of Indonesia’s David Tjiptobiantoro and Australia’s Peter van Loenhout.

It wasn’t just the 458 Challenge cars providing the spectacle on track today. There were also two 40 minute sessions for the drivers of the historic F1 cars and the laboratory cars from the XX programme. Some of the drivers, definitely the greediest for getting excitement behind the wheel, took part in both sessions, owning both an F1 car and an XX: the amazing Mugello circuit would certainly have satisfied their cravings!

Tomorrow’s programme follows a similar pattern, with qualifying in the morning and the two races either side of lunchtime, interspersed with sessions for the Formula 1 and XX cars. With the circuit gates at last open to the public, free access to the paddock means that everyone will be able to get a close look at the most beautiful Ferrari from all eras. There will be a fantastic display of cars from the past, from the 250 GTO to the F40, to name but a few, as well as all the Prancing Horse’s current range, topped off with an appearance from the LaFerrari.

Ferrari Finali Mondiali: The show gets underway at Mugello