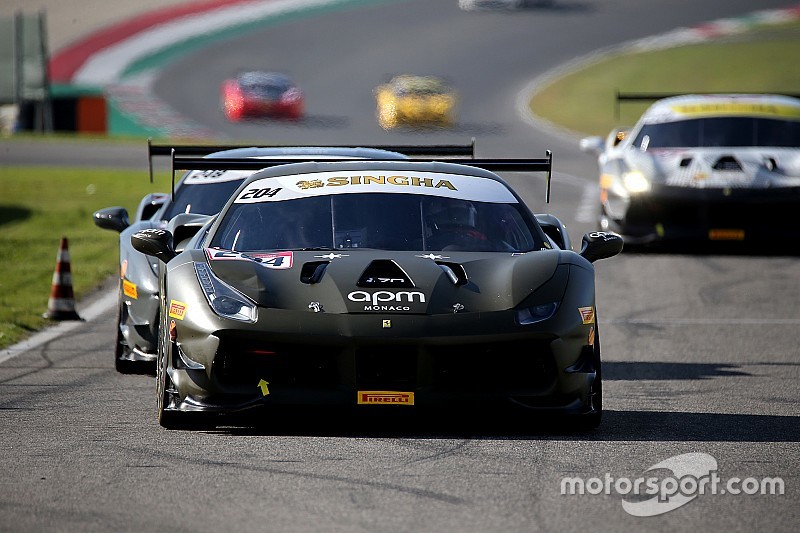 Ferrari Hong Kong driver Prette held on through the inside of the first corner on the last lap to ensure he kept the rapidly advancing Huilin Han behind on the final lap to win.

The two ran their own private duel throughout the race, but there was only one attempted pass, coming at the first corner of the opening tour. Prette, though, held the inside line and batted the challenge away.

As they both powered through the exit of the sweeping Poggio Secco, the spinning Ferrari of David Dicker caused the first safety car after just three corners of the sprint.

It was almost three retirements on the spot as the unsighted Min Xiao and Kanthicha Chimsiri narrowly avoided Dicker and brushed the tyre wall at Poggio Secco.

Prette then nailed the restart to keep Han behind, but nine laps later he had it all to do again as Eric Zang spun into the gravel at Casanova.

The leader kept his nerve at the restart to pull clear, but Han filled his rear view mirrors and weaved behind the Hong Kong Ferrari.

Prette then completed the narrow win ahead of his rival.

The battle for third was a tight four-car train with Zen Low managing to stay ahead of Angelo Negro, the Auto Shanghai driver having worked his way up from seventh to fifth on the opening lap.

Tadakazu Kojima was one of Negro’s early battles and fell behind him to finish fifth ahead of Makoto Fujiwara.

Friday race winner Go Max had looked set to take sixth but he spun out on the final lap of the race.

That excursion meant Angie King took seventh ahead of Tiger Wu, who sealed the Trofeo Pirelli Am class crown by defeating Ken Seto after he could only finish 22nd after starting last of 31 cars.