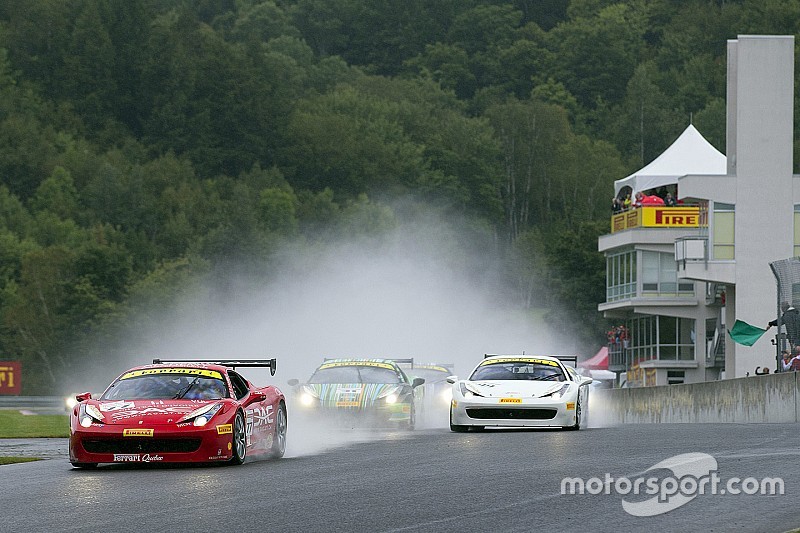 The racing conditions made for an excellent showcase to the Tifosi in attendance.

Mont-Tremblant, 12 September – Amidst the rain showers and slick track conditions, 24 drivers competed in the first round of racing this weekend at Circuit Mont-Tremblant in Quebec, Canada. And if the circuit design is not exciting enough, the racing conditions made for an excellent showcase to the Tifosi in attendance.

With a victory at nearly every race this season, Emmanuel Anassis (Ferrari Quebec) continued his winning streak. Beginning today’s race in pole position, Anassis was unstoppable. His fellow Canadian competitor, Wei Lu (Ferrari of Vancouver) made a great effort to stay on his tail, but Anassis was relentless. John Farano (Ferrari of Ft. Lauderdale) and Ryan Ockey (Ferrari of Ontario) finished second and third on the podium.

Mike Zoi (Ferrari of Ft. Lauderdale) was unstoppable in today’s race. From start to finish, he battled is way among the Trofeo Pirelli drivers, completing the fastest race lap of his class at 1:49:772. And local Quebecois, Patrice Brisebois (Ferrari Quebec) had the biggest improvement of all drivers. Beginning the race seventh in his class, he finished on the podium steps in second place, just ahead of Marc Muzzo (Ferrari of Ontario) who came in third.

The ultimate victory in the Coppa Shell class belonged to Jean-Claude Saada (Boardwalk Ferrari) who was eager to continue his victorious endeavors in this season’s Ferrari Challenge. Rodney Randall (Miller Motor Cars) battled his way to second place and Dave Terry (Ferrari of Ontario) finished in third place, his first podium of the season. The racing continues tomorrow with a warm-up session in the morning, qualifications and Race 2 at 2:30 PM EST (8:30 PM CET).