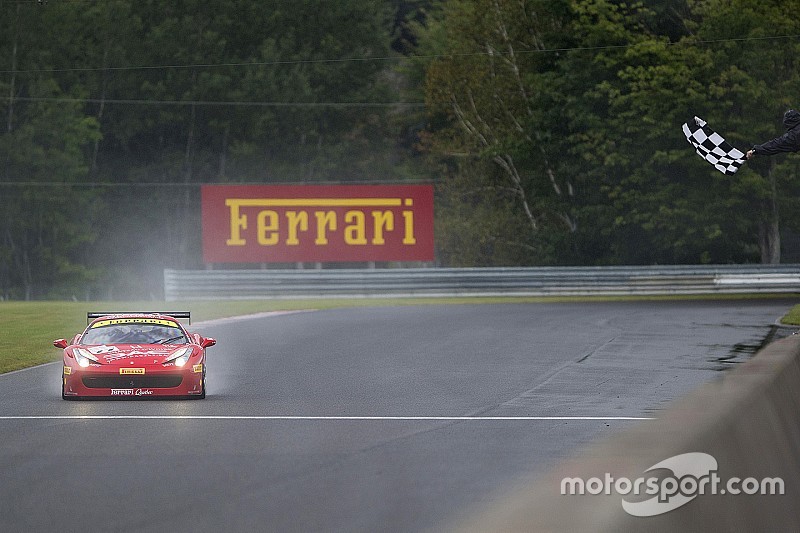 The second portion of the North American Ferrari Challenge race weekend was held under heavy rain.

Mont-Tremblant, 13 September – Heavy rain showers and murky skies hung over Circuit Mont-Tremblant for the second portion of the North American Ferrari Challenge race weekend. Although the drivers were able to run this morning for the warm-up session, qualifications were cancelled due to the inclement weather and the starting grid was set based on yesterday’s championship points after Race 1.

At the close of one of the last races of the season, Emmanuel Anassis (Ferrari Quebec) continues to lead in the drivers’ championship. After his win in today’s, he stands at 226 points, 90 points ahead of the second place contender, John Farano (Ferrari of Ft. Lauderdale). Wei Lu (Ferrari of Vancouver) came in third place in today’s race.

Mike Zoi (Ferrari Ft. Lauderdale) also made his second consecutive victory this weekend in Mont-Tremblant. Recording the fastest lap in his class, Zoi found himself sequestered between the Trofeo Pirelli drivers. Finishing behind him were Anthony Imperato (Ferrari of Long Island) in second place and Steve Johnson (Ferrari of Ft. Lauderdale) in third.

Jean-Claude Saada (Boardwalk Ferrari) returned to the top of the podium steps, claiming his victory for the second time this weekend. Holding off his winning streak, Saada battled against his repeat rivals Joe Courtney (Miller Motor Cars) and Dan O’Neal (Ferrari of Ft. Lauderdale). Courtney and O’Neal finished second and third respectively.

The penultimate round of the championship, the last on American soil of the 2015 season, will be in conjunction with Ferrari Racing Days, held at NOLA Motorsports Park in New Orleans, on October 2-4.