Onofrio Triarsi (no. 23 Ferrari of Central Florida Ferrari) would take overall victory as well as victory in the Trofeo Pirelli class.

Lakeville, Conn. – Lime Rock Park saw twenty five examples of the Ferrari F458 Challenge take the green flag on Saturday afternoon for a pair of races that would feature a similar result. Onofrio Triarsi (no. 23 Ferrari of Central Florida Ferrari) would take overall victory as well as victory in the Trofeo Pirelli class in both of the day’s North American Ferrari Challenge Series.

Several thousand spectators enjoyed the day’s races, as well as the paddock displays featuring each generation of the Ferrari Challenge models, dozens of Ferrari street vehicles, as well as a Ferrari F150 Formula One race car.

Triarsi led the first race from start to finish while a race-long battle was waged between Alfredo Caiola (no. 9 Ferrari of Long Island Ferrari), John Farano (no. 85 The Auto Gallery Ferrari), and Damien Ockey (no. 31 Ferrari of Ontario Ferrari) for the remaining two podium positions. 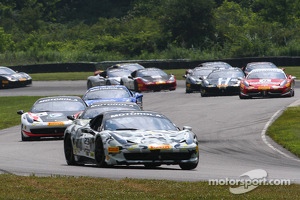 While in second place with the laps winding down, Farano spun off circuit after he encountered oil left as a result of contact between other competitors. Caiola inherited second position and held off Ockey to the checkered flag on the final lap.

The second race, held after a brief rain shower fell on the Connecticut hills, saw Triarsi again lead the race start-to-finish. However, the race had the added drama of a late-race restart after a stoppage to repair the wall in turn one after a single-car incident involving Al Delattre (no. 16 Ferrari of Fort Lauderdale).

The restart saw Triarsi jump out again to a lead ahead of a battle between Farano, Ockey, Cariola and Michael Schein (no. 21 Ferrari of Central Florida Ferrari). Farano and Ockey would trade positions several times, with Farano making the final pass for second place into turn one.

Brent Lawrence (no. 14 Ferrari of San Diego Ferrari) won both of the day’s Coppa Shell races handily, finishing fifth in the first race and seventh in the second.

After a brief summer hiatus, the next round of the North American Ferrari Challenge Series will held at the Canadian Tire Motorsports Park near Toronto, Ontario, Canada on September 6-8.

Onofrio Triarsi (no. 23 Ferrari of Central Florida Ferrari) – Trofeo Pirelli / Overall winner, race one and two: “I started on pole, it worked out great. Into turn one it’s most important to get away clean and make sure if you have someone on the outside you give them their space, make it through turn two, three, and four and after that maintain it throughout the race and maintain a gap over the other cars.

Traffic is key, it can help a lot, you just have to be patient and read what the other guys are doing. As long as you stay consistent, you are patient on passing and you get through everybody cleanly it works out. The car is going to stay the same, hopefully it goes the same way.”

Alfred Caiola (no. 9 Ferrari of Long Island Ferrari) – Second Trofeo Pirelli / Overall, race one: “The race was a fight between me and Farano – Farano passed me, he spun in front of me, I passed him back – Damien Ockley was on me for a while but those last couple of laps he couldn’t make it happen. The car stayed under me for the whole race, so all in all a great day.

Here, if you get bottled up going into one corner, you get bottled up for half a lap so there’s a lot of strategy. But sometimes you have to go, otherwise you’ll get stuck and the other guy will be gone. It was a great race, no big incidents, so that’s always a good thing. Thanks to the team for a great set-up.”

Damien Ockey (no. 31 Ferrari of Ontario Ferrari) – Third Trofeo Pirelli / Overall, race one and two: “The race was great. I started in fourth place in the first race and actually fell back a position at the start, but I was able to move up and by the end of the race I was right up on the back end of the second car and it was just about a drag race down the front straight for second place, but third place is great, I’m pretty happy with it.

The track is very hot, and it takes a little bit of a different technique to get around the track now. With this track it’s very difficult to pass, so you almost have to wait for someone to make a mistake. The traffic can sometimes be a hindrance but can sometimes be helpful.”

John Farano (no. 85 The Auto Gallery Ferrari) – second place Trofeo Pirelli / overall race two: “We weren’t in a battle for the win, because Tiransi ran away from us – he drove a great pair of races. I hit an oil slick just before turn six and it just took me around, I did a little off-roading, but I managed to get it back on track and finish fifth but it was a little disappointing for sure. So finishing second in the second race certainly does a lot for me.

We are in a point race and these results certainly help. Damien and I had a lot of fun trading places. We’ve raced together for quite some time and we know how much room to give each other, so it was very respectful and a lot of fun. Traffic is always tough, the drivers that are being lapped always try to do a good job but so you have to be very patient in the traffic.”

Brent Lawrence (no. 14 Ferrari of San Diego Ferrari) – Coppa Shell winner, race one and two: “We qualified seventh for the first race and had some really, really good pace in qualifying for the second race and found another second – my driver coach gave me some great help – so I knew we had the speed. We made it through the lapped traffic, that was the challenge and I was keeping up with the leaders overall and had a good cushion over second in class. This is my first time at Lime Rock, it’s a beautiful place and it’s wonderful to get a chance to race here.”

Ferrari Finali Mondiali: The show gets underway at Mugello