Harry Cheung scores first victory of the year on Saturday and Perez’s victory on Sunday is his second of the year.

Mazda Raceway Laguna Seca is a natural terrain road course just south of San Jose in Salinas, California. Among its many challenging corners is the world-famous Corkscrew, which plummets drivers 5 1Ž2 stories in only 450 feet, providing a true test for the Ferrari 458 Challenge Evoluzione.

The first race, held on Saturday afternoon, saw a pair of dominating victories in both the Trofeo Pirelli and Coppa Shell categories. Harry Cheung (Ferrari of Beverly Hills) started the race from the overall pole position and led every lap to win the race and the Trofeo Pirelli division. Finishing second was Henrik Hedman (Ferrari of Fort Lauderdale) with Ryan Ockey (Ferrari of Ontario) in third position. Ricardo Perez (Ferrari of Houston) had the race’s fastest lap. 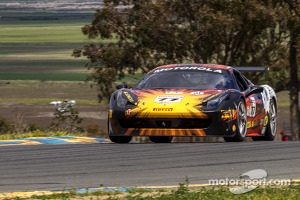 In the Coppa Shell division, Chris Ruud (Ferrari of Beverly Hills) qualified a strong sixth overall and led every lap in class to win the race, finishing an even stronger fourth overall. Second in class was James Weiland (Ferrari of San Francisco) with John Baker (Ferrari of Fort Lauderdale) in third position.

Sunday’s race would see a different overall and Trofeo Pirelli winner, as Perez qualified on pole position and led every lap to take victory ahead of Hedman in second place and Gregory Romanelli (Ferrari of Fort Lauderdale) in third position. The victory was Perez’s second of the season, after he took victory in the second race at Sonoma Raceway. Patrick Byne (Ferrari of Newport Beach) ran the fastest lap of the race.

Ruud would take the second victory of the weekend in the Coppa Shell, finishing sixth overall, bringing his tally to four victories for the season. Robert Herjavec (Ferrari of Ontario) finished in second while Jon Becker (Ferrari of Beverly Hills) finished in third position.

The next event for the Ferrari Challenge Trofeo Pirelli will at Circuit Gilles Villeneuve in Montreal, Canada in support of the Formula 1 World Championship on June 6-8.

Perez doubles up in Ferrari Challenge North America at Montreal