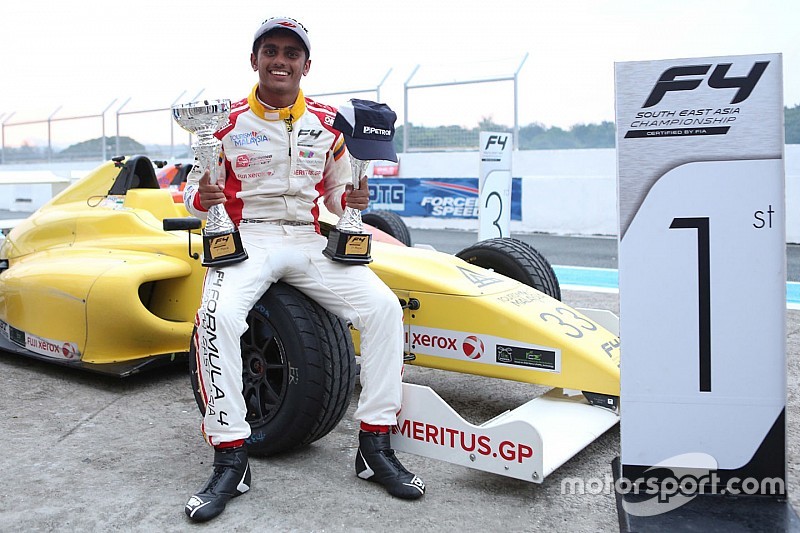 Akash Gowda took wins in both the Formula 4 South East Asia races on Saturday, in Round 2 at Clark circuit, including his maiden victory in Race 1.

The Indian started the first race from third and quickly inherited the lead after polesitter Presley Martono and front-row starter Mohammed Nalwalla were penalised for a jump start.

It was then a steady race for Gowda under cloudy conditions in Philippines, with him managing the lead to claim his first win of the championship.

New Zealand's Faine Kahia was not far behind ending mere 0.456s in second, while a three-way battle ensued for third, which debutant Khalid Al Wahaibi came on top of.

"That was a good Race 1 and I am so happy to finally claim my first race win in my first season in the F4 SEA championship," said Gowda after his win.

"The start was a bit tricky but after the front-runners had a penalty, I inherited the lead but knew that I could not let my guard down with Faine [Kahia] behind me.

"But, I managed to maintain a gap to him throughout the race and claim the victory, which I am delighted about," he added.

Two in a row for Gowda

For Race 2, Gowda started on pole with Martono alongside the Indian, as the two battled away going into Turn 1.

The Indonesian got the better of Gowda to take the lead in rainy conditions, with the Indian falling to eighth in the next few corners.

Gowda fought back and midway in the race, he was up at third, chasing newcomer Gabriel Cabrera for second - whom he was able to dispatch quickly.

Up ahead, a mistake from Martono allowed both Gowda and Cabrera to catch up, with the Indian plunging in to go past Martono and take the lead in first corner.

Gowda crossed the line to win Race 2 with four more races remaining in the weekend, while Martono was forced to settle for second as Cabrera completed the podium.

Meanwhile, Nalwalla retired from the race after he was caught up in an incident on Lap 1, having started the race from fourth.

"I am really delighted with the win in Race 2, which was definitely more interesting. I was a bit nervous going into the race, which did cost me at the start, as I dropped down to P8," Gowda said.

"After that, I settled my nerves and kept my head down. By lap 2, I was better able to adapt to the track and the conditions and caught up with everyone ahead of me.

"I managed to overtake Gabriel [Cabrera] and not long after that we were able to catch Presley [Martono].

"Presley made a small mistake and I managed to overtake him in to the first corner near to the end.

"After that, all I had to do was concentrate and keep my head down to get the job done," he added.