"Special" pass for Macau victory was on the limit - Ticktum 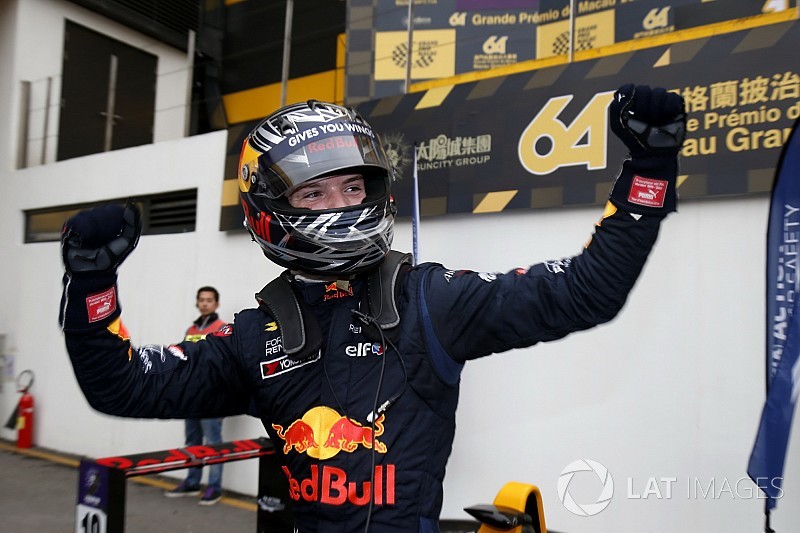 Red Bull junior Dan Ticktum has described his move that won him the Macau Grand Prix as something special.

The key manoeuvre came on the penultimate lap, when he simultaneously slipstreamed past Lando Norris and Maximilian Gunther in a brake-locking outside pass into Lisboa.

That moved Ticktum from fifth to third position, and he took the lead exiting the very final corner of the race when Sergio Sette Camara and Ferdinand Habsburg both crashed.

“It was an incredible race,” said Ticktum, who was in only his third Formula 3 race weekend.

“The full-course yellow and safety car can sometimes throw you off, but I kept calm and I knew we still had a fair amount of time.

“I just took every opportunity I could – there weren’t many but I took the one I needed to down to Lisboa.

“When I was in that position behind Lando and Maxi, I knew I was going to have to try something pretty special if I was going to be able to win, and it paid off.

“I knew where my reference point was for braking, and I was very close to the racing line anyway, so I kept that point in my peripheral.

“They braked earlier than I knew I could, and it worked out nicely – any later and I could have been in a bit of trouble, but it was timed perfectly.”

Ticktum admitted his win was fortuitous, it coming as a result of the two leaders shunting in the final corner - but he felt he deserved the lucky break after red flags hampered him in qualifying on Friday.

"I would say I’ve had a pretty unlucky race weekend up until the final race, so I was due a bit of good luck – but there were no words to describe what it was like coming across the line," he said.

The Brit also paid tribute to the Motopark team, which led every lap with Joel Eriksson, Sette Camara and Ticktum, and appears certain to run him in the F3 European Championship next season.

The team’s set-up in Saturday’s qualification race was not perfect, Eriksson losing the win to Callum Ilott and Ticktum falling to eighth, but the eventual race winner was confident he would have the quickest car on Sunday.

“It was all the usual changes,” Ticktum told Motorsport.com, “just general things to calm it down.

“We were so fast we didn’t need to be as quick as we were trying to be on Saturday, so we sacrificed a bit of pace but kept the tyres for much longer.

“The team performed incredibly well to adapt the car after the qualification race, so I have to thank everyone who gave me this opportunity – my engineer, my mechanics, Timo [Rumpfkeil, team boss] and Andy [Kohler, technical director].

“I can’t extend my thanks to them enough – and the same goes for my family and Red Bull.”

“His pass at Lisboa was mega – P3 would have been a good effort from P8 on the grid, but he won it.

“It’s a deserved win because he was one of the three quickest guys this weekend.

“There was nothing to choose between Sergio, Joel and Dan, and in the end Dan kept calm and he won it.”