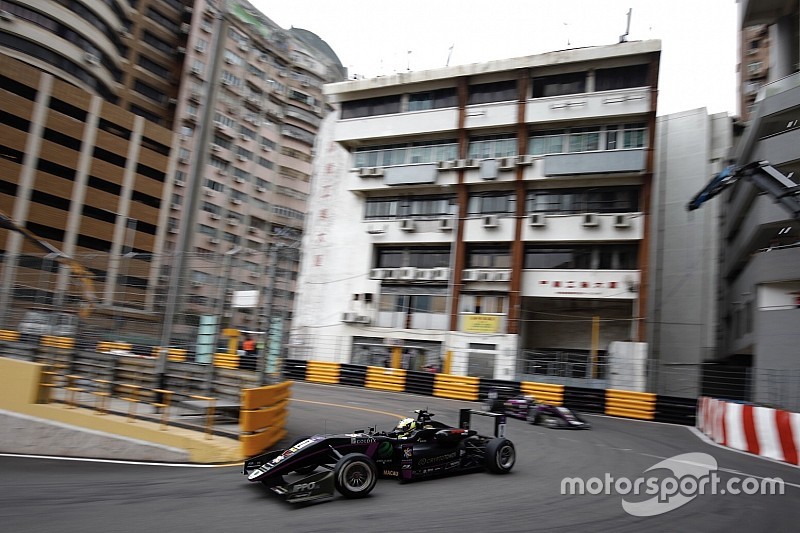 Macau Grand Prix qualification race winner Dan Ticktum says he was worried about the threat from Motopark teammate Joel Eriksson on his way to victory.

Red Bull Junior Ticktum, who is bidding for a second successive Macau GP title, passed Callum Ilott on the second lap, and Eriksson passed the Carlin driver for second place just after half-distance.

Eriksson, who has returned to Formula 3 for the weekend after his rookie DTM season with BMW, has been a major force all weekend in Macau but has been out of luck with traffic and incidents in qualifying.

“It was clear even in the first half a lap that our pace was stronger than Callum’s,” said Ticktum. “So I really tried to nail the final sector and I got him back for the lead.

“While Callum was behind I saw I was pulling away quite easily, and I was saving tyres for the last part of the race.

“As soon as I saw Joel behind… I’ve seen he’s been in a quicker car overall this weekend but didn’t get the chance to show it in qualifying, so I upped the ante quite a bit.

“That was enough to pull a gap and I backed off on the last lap.”

Eriksson added: “I was quite pissed off after my crash in qualifying but it’s typical of Macau, and from the top six for the qualification race you can still win the main race, so my main focus was to get a top-three at least.

“It’s looking very, very good for the main race and the pace was quite strong. I tried to close the gap to Dan in the middle of the race, but there was no point to take any risk and waste the tyres away.”

Eriksson and Ilott joked about the closeness of their battle as the Swede passed, which caused him to brush the barrier at a 165mph part of the circuit. This came one year after the duo collided at the same spot while battling for the lead of the Macau GP.

“I think Callum just didn’t see me – when I was on the inside he was going to the right, and then I was scratching the wall and I think he realised I was there. It was a close call but he did a good job to leave just enough room.”

Ilott added: “I left just enough space but I thought he wasn’t going to do it. But he kept it there, and when I saw his front wing I had to give him space – fair play to him.”

The Carlin team, which is understood to have run relatively low downforce on a circuit that was green after overnight rain, struggled for pace, despite the third and fourth places for Ilott and Sacha Fenestraz.

“I just didn’t have the pace, and I couldn’t get the exits,” said Ilott.