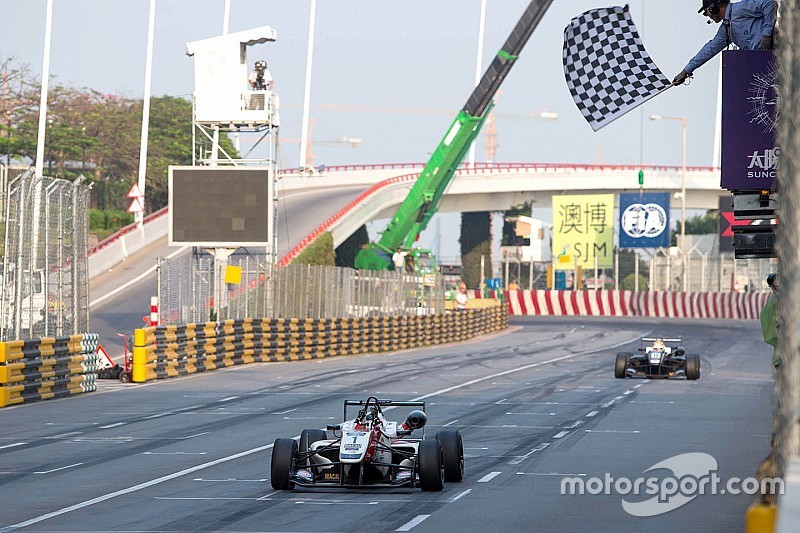 Macau Grand Prix victor Felix Rosenqvist said he felt less pressure to deliver his second consecutive win than he did to take his first victory there.

The Swede had come in to the weekend as the clear favourite on the back of his European Formula 3 championship title and his Macau success last year.

But despite being the man to beat, Rosenqvist said he never felt any extra stress – or that anything less than victory would be a disaster for him.

“Actually I would say I felt really cool all weekend,” Rosenqvist told Motorsport.com. “Maybe the pace advantage was less than last year, because I think I was more comfortable last year with the pace.

“There is always the risk of a big mess here, and you need luck to win the race, so I think there is always a bit of a stress thing.

"But even if I had crashed, or something had happened that wasn't in my hands, then that is racing, and that is Macau. I felt quite cool. And in the end the win felt unreal.”

Rosenqvist believed that the key to his success was getting an early advantage over the pack – which is why he pushed so hard to get past Charles Leclerc at the restart.

“Knowing the tyres a bit, I knew I had to make my move in the beginning, and that it would drop off a little bit at the end,” he said.

“The car was so good in the beginning and you know then that normally it will not last forever. So the plan really worked fine.”

Speaking about his decisive move past Leclerc in to Lisboa, he said: “I lifted a bit on the straight and went flat when the time was right.

“I had the perfect slip stream and managed to have my whole car in front of him for the braking, so it was not difficult to overtake.”