Today at Macau, Keisuke Kunimoto (Tom's Team) joined an illustrious list of winners of the Macau Grand Prix, the rookie claiming the title despite the best efforts of Edoardo Mortara (Signature Plus) and - for a time at least - Oliver Campos Hull ...

Today at Macau, Keisuke Kunimoto (Tom's Team) joined an illustrious list of winners of the Macau Grand Prix, the rookie claiming the title despite the best efforts of Edoardo Mortara (Signature Plus) and - for a time at least - Oliver Campos Hull (HBR Motorsport). In one of the performances of the race, though, Brendon Hartley (Carlin Motorsport) hauled himself up from 20th on the grid to snatch the final podium place as all around him self-destructed or otherwise succumbed to what one can only charitably suppose was heat-induced insanity. 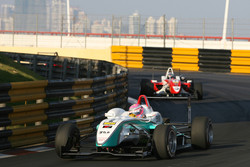 At the start Mortara got away in the lead from Kunimoto, though Jaime Alguersuari (Carlin Motorsport) was pushing him hard, while team-mate Oliver Turvey made an awful start. However, behind them it all went wrong in rapid order, possibly as a result, with Roberto Streit (Raikkonen Robertson Racing) not even waiting to the first corner to try and win the race. The result was that the Brazilian crashed heavily into the wall, and took Sam Birds (Manor Motorsport) with him. Bird was understandably aggrieved and since Streit was the one who had been claiming the secret of winning was to not try and win the race in the first corner, you could see Bird's point. Seconds later Marcus Ericsson (Carlin Motorsport) went off heavily on the run up from Lisboa and everyone else piled up behind him or had to sneak through on the inside. Needless to say the Safety Car was deployed almost immediately and quickly picked up the leader. Mortara thus found that any advantage he had gained was gone, as Kunimoto settled in behind him, and ahead of Alguersuari, Campos Hull, Kei Cozzolino (Now Motor Sport), Roberto Merhi (Hitech Racing), Jon Lancaster (Manor Motorsport), Hartley, Carlo van Dam (Tom's Team) and Walter Grubmuller (Hitech Racing). In 11th - from an awful long way back - was the seemingly certifiably insane Mika Maki (Signature Plus), ahead of Masaki Matsushita (PTRS by Ombra), Laurens Vanthoor (RC Motorsport), Renger van der Zande (Prema Powerteam), James Jakes (ART Grand Prix), Jules Bianchi (ART Grand Prix), Atte Mustonen (Raikkonen Robertson Racing), Nicola de Marco (RC Motorsport), Max Chilton (Hitech Racing) and Michael Ho (Raikkonen Robertson Racing). 21st was the recovering Turvey, ahead of Koki Saga (Le Beausset Motorsport), Basil Shabaan (HBR Motorsport), James Winslow (Ombra), Stefano Coletti (Prema Powerteam), Cong Fu "Franky" Cheng (Signature Plus) and Kazuya Oshima (Manor Motorsport).

It took two laps to clear the wreckage and at the restart Kunimoto saw his chance, barging past Mortara on the run in to Lisboa, while Mortara brushed the barriers and damaged his car. Once past Kunimoto put up a determined effort to hold the Italian off, with what looked not unlike a touch of excessive weaving. However, it worked and the Japanese almost immediately started to pull out a gap. While he was doing that Saga joined the injured list, smacking into the wall at Lisboa, and taking himself out of commission on the spot, while the pressure on Mortara eased somewhat with the news that Alguersuari had been judged to have jumped the start - the Spaniard was awarded a drive through penalty. It was just a case of when he would choose to come in and serve it. First though, he had Mortara to deal with, getting past on lap three, almost towing Campos Hull with him. However, Mortara struck back, and Campos Hull had to give way. Alguersuari wasn't going to though.

All of this was letting Kunimoto drive off into the distance unchallenged, setting the fastest race lap so far as he did so, though Alguersuari looked to have the pace to catch the Japanese now he'd disposed of Mortara. Sadly, he also still had to come in for his penalty. Mortara had enough to worry about with Campos Hull all over him, especially when the youngster found a way past.

Just as it looked as if the race might settle into a recognizable pattern, however, the mid-field runners seemed to go collectively crazy, with Matsushita hitting the wall just after Mandarin, and temporarily blocking the track. Two laps later and Winslow was off at Police, stuffing it in the wall. Before that, though, Campos Hull set a new fastest lap as he set off in pursuit of Kunimoto, taking advantage of the fact that Alguersuari had now pitted for his driver through. Elsewhere, in the midst of all the chaos but seemingly untouched by it, Hartley was on the move, passing Lancaster for 6th, while Maki was also now in the top ten. At the front Mortara had worked out how to deal with Campos Hull, and did it by driving round him at Lisboa. Winslow's crash might not have been enough to require a Safety Car, but the next crash was. Merhi went off at Reservoir in the now traditional manner, leading to the now traditional destruction of a Dallara, and the equally traditional Safety Car, especially after van Dam clipped the wreckage and crashed out himself.

Again, they all settled in, with Kunimoto seeing his lead vanish completely, as Mortara caught his up again, dragging Campos Hull, Cozzolino and Hartley along with him. Maki was now 6th, leading Lancaster, van der Zande, Vanthoor, Grubmuller and Jakes. 11th was Bianchi, from Turvey, Coletti, Cheng, Chilton, Alguersuari, Oshima, Shaaban (who'd been in the pits), Marco, Ho and Mustonen, who'd obviously had an off of his own too.

We were looking at a five lap sprint to the finish now, so long as the survivors could just keep away from the walls. Certainly Mortara didn't seem able to, taking some horrendous chances in his efforts to catch Kunimoto. Trouble was it seemed to be having the opposite effect, allowing Campos Hull to have another run at Mortara. Meanwhile, in the midfield Maki was holding off van der Zande, as the Dutchman tried to relieve him of 6th. The Finn was having none of it - he hadn't dragged the car to Saturday's finish on three wheels just to have someone demote him. In the excitement of the restart it would have been easy to miss Shabaan, but he'd gone off at Lisboa. However, all eyes were now on the top drivers, with Kunimoto pulling away, while the battle for 2nd to 5th raged between Mortara, Campos Hull, Cozzolino and Hartley, the latter maintaining a watching brief and waiting for the inevitable mistake ahead. The Carlin cars were clearly quick (Turvey had clawed his way back into the top ten and Alguersuari had worked off the effects of his drive through to climb to 16th) but the Kiwi didn't want to risk tangling with the two ahead, which proved wise.

However, the next disaster was Coletti who went off, dragged it back on and finally stuffed it properly at Hospital. However, that was of no concern to Hartley. What was of concern was that Cozzolino and Campos Hull were now going hammer and tongs at each other and that finally the inevitable happened and they both skated off at Lisboa. It was a shame for Campos Hull in particular as it would have been something of a giant- killing feat for HBR, but it wasn't to be. That let Hartley into 3rd, trying to chase Mortara down but with insufficient time to do the job. While Turvey set a new fastest lap, Hartley kept right on pushing, but it was too late. Mortara responded by setting a new fastest lap, but then Hartley set his own on the final lap of the race.

Kunimoto came home a delighted winner, while Mortara looked furiously disappointed. Hartley, on the other hand, was more than happy with his result, having doubted such a thing was possible when he was wiped out of the qualification race by Jakes. Fourth went to Maki, who managed to hold off van der Zande for the remainder of the race, while Vanthoor was 6th just ahead of Turvey, Grubmuller, Bianchi and Alguersuari. 11th was Lancaster, from Jakes, Cheng, Chilton, Cozzolino, Oshima, Campos Hull, Mustonen, de Marco and Ho.