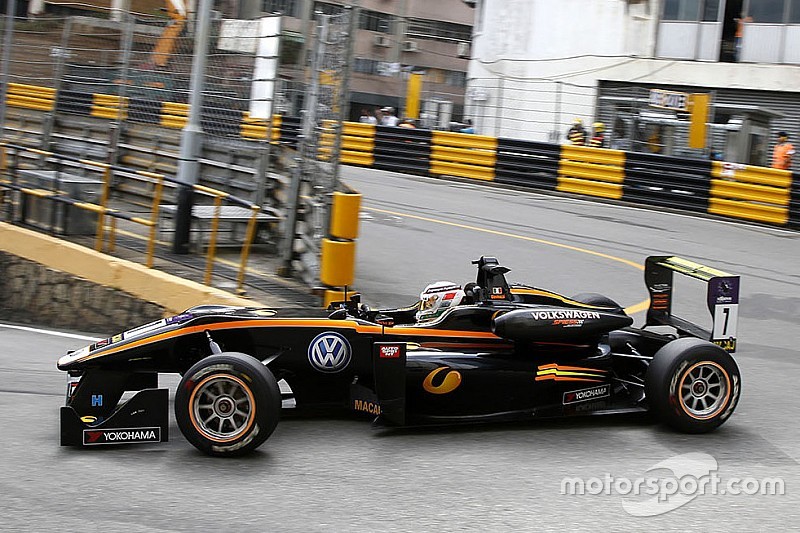 Antonio Giovinazzi thinks the FIA should have waited until after the race to see all the evidence, before ruling on the Macau Grand Prix clash between himself and Daniel Juncadella.

The Carlin driver lost victory in Saturday's qualification event after the race stewards deemed him guilty of causing the collision with Juncadella that put the Spaniard out on lap one.

After being handed a drive-through penalty the moment he crossed the line, there was no scope for his team to appeal after the stewards later decided – having gone through on-board footage – that their original ruling would stand.

“I think a better idea would have been to call us to the stewards, watch the video together with the on-boards and then take the decision together,” Giovinazzi told Motorsport.com.

“They took the decision before the podium, and I was quite a bit surprised by this. I did the race just under investigation, and then when I came there [after the race] it was already a 20-second penalty. It was a strange decision.”

Giovinazzi thinks that neither he nor Juncadella were at fault in the crash, which he put down to a simple racing incident.

“I did a really good start and I was already P3 before Lisboa corner,” he said. “Then on the exit of Lisboa we touched a little bit with Juncadella. I don't know what happened.

“You can see on the video we have that I was going straight, and so was Daniel. I think it was just a racing accident, and also Dani feels the same.

“So I don't know why the stewards decided it like that. They took the decision already before the podium, and that is a little bit disappointing for me.”

Although Giovinazzi will not start from pole, he thinks that victory cannot yet be ruled out – although he accepts it will be a tough call to move up from tenth.

“Tomorrow will be a lot harder from P10, but Macau is not a normal track,” he said. “You can still do a really good job from P10. We have a full set of new tyres and we see tomorrow.”

Juncadella looks set to be forced out, after the tub on his car was cracked when he was collected by other cars.