Vaxiviere dominates day one at Motorland 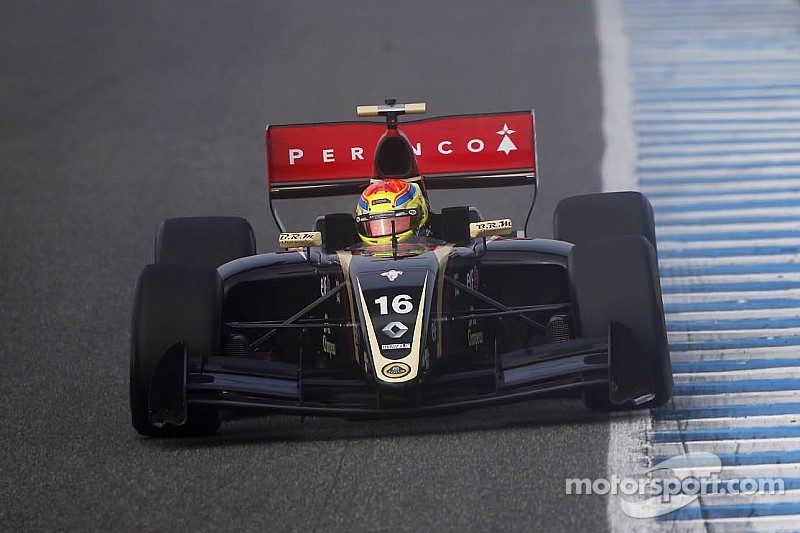 Tomorrow will be the final day of testing before the start of the World Series by Renault.

Matthieu Vaxiviere (Lotus) dominated both sessions on day one of the Formula Renault 3.5 Series collective test at Motorland Aragón.

The Lotus F1 Junior Team member posted a lap time of 1:40.635 to lead the way ahead of Red Bull Junior Team driver Dean Stoneman (DAMS) and SMP Racing protegee Egor Orudzhev (Arden Motorsport). Tomorrow will be the final day of testing before the start of the World Series by Renault.

After the sessions at Circuito de Jerez on 5 and 6 March, the Formula Renault 3.5 community returned to action on the track that will host the opening round of the World Series by Renault. 11 teams and 20 drivers confirmed to date were able to continue their preparations for the 2015 season, while Roman Mavlanov (Zeta Corse) joined them.

Vaxiviere ahead of the Fortec Motorsports duo

At the mid-way point of the session Tom Dillmann was back on top, but after a short red flag period provoked by Egor Orudzhev, Jazeman Jaafar and Matthieu Vaxiviere went quicker. The Frenchman clocked a lap in 1:41.331 to lead from the Malay native.

First on the circuit, Nicholas Latifi (Arden Motorsport) saw his time beaten by Roberto Merhi (Pons Racing), on hand in Spain 24-hours after his first race in F1 at Kuala Lumpur. Tom Dillmann then took over, but 30-minutes from the end of the session, Matthieu Vaxiviere moved to the sharp end of the order.

Following a brief interruption to collect Philopaz Armand from the gravel trap, the final sprint allowed the Frenchman to improve with a best time of the day at 1:40.635, a half second faster than Dean Stoneman, Egor Orudzhev, Jazeman Jaafar and Tio Ellinas (Strakka Racing).

Matthieu Vaxiviere: “This morning, we did a good job with our race settings before fine tuning the set-up for fast laps. We wanted to put in a time on new tyres at the end of the session. It turned out good and confirms our potential on this track.

"Our primary satisfaction lies in the step we’ve made with the new regulations, especially concerning the DRS. Tomorrow will be more important, we need to correctly prepare the car in low-downforce configuration but also the pit stops.”

Dean Stoneman: “It was a good day with the second best time this afternoon. We tried different things to get used to the car after Jerez and see if the different changes provoked an improvement or not.

"I think that Vaxiviere put in one more lap than me, so I would’ve been able to improve even more and I made some mistakes costing me a couple of tenths in my quickest lap. Tomorrow, it’s all about learning the car with low-downforce because we didn’t run much at Jerez.”

Egor Orudzhev: “It was a good morning session where you had to put a lap together. Unfortunately, I made a mistake which brought out the red flag. We had a few problems in the afternoon that limited our programme.

"All the same, we managed to be always close to the leader and that was without using the right tyres. It is a good effort, especially as we spent a lot of time analyzing while waiting for everyone to show their true potential.”

Roberto Merhi: “Yesterday, I did my first race in F1. It was rather good given the little running in free-practice and qualifying. The team did an impressive job, which allowed me to finish the race.

"It was hard, but the pace was better than what we thought it would be! Today was a positive day as Pons Racing got the car ready when I came here but I do have a little jet lag. I would say I am at 90% of my capabilities! ”