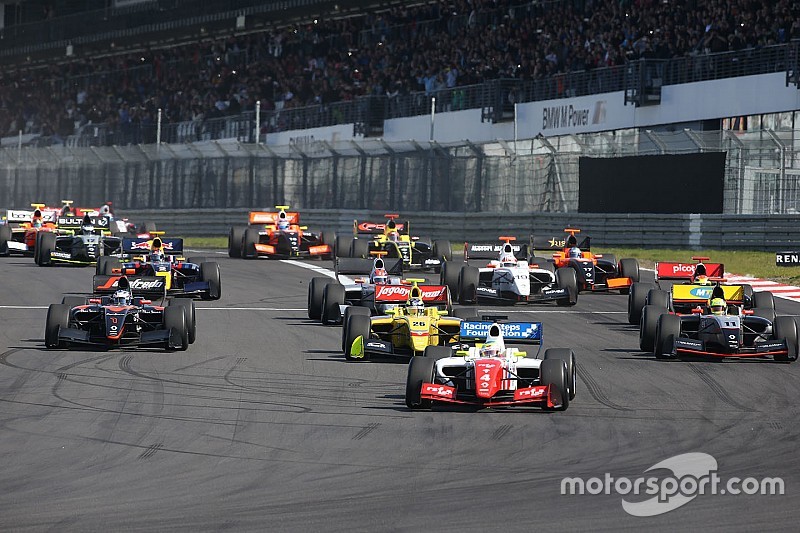 It may not have been a vintage year in its final season with Renault backing, but Formula Renault 3.5 could still boast an impressive array of talent in 2015. Valentin Khorounzhiy offers his verdict on who stood out.

The 2015 Formula Renault 3.5 line-up was not exactly strongest in series history, but it was certainly good enough to provide a fitting send-off to the Renault era of the championship.

If you happened to follow the series for at least a few races this season, chances are you know exactly who takes the #1 spot in this ranking - or, for that matter, who takes #2.

But there was not much in it between the rest of the frontrunners, who proved a strong supporting cast to the championship's main duo.

Below is our highly subjective, in-depth ranking of the top 10 best drivers of the 2015 FR3.5 campaign.

The beginning of Jaafar's third season in FR3.5 promised great things as the Malaysian looked strong in pre-season testing, was on the podium right away at Aragon and cemented his already existing reputation as a Monte specialist with a win at the street circuit.

But his title challenge rapidly ran out of steam and, through a mixture of technical issues, bad luck, mistakes, yet also a perplexing loss of pace, he only scored 43 points in the 14 races since Spa. A likely victory bid could've helped fortunes at Silverstone - but he damaged his nosecone while chasing the race lead and was out of contention.

The final statistics of his campaign are a bit harsh, as a late-season podium at the Nurburgring proved he still had speed, but a once promising 2015 has by and large turned into a write-off.

A shock podium finisher in the final race of his part-time 2014 campaign in the series, Latifi would've been expected to lead Arden this year - but instead came nowhere near teammate Egor Orudzhev in the points. But the stats do Latifi a disservice as, while he was indeed outperformed, it wasn't nearly by the margin the points suggest.

Of the two Arden drivers, the Canadian was the first to lead laps and would've probably won from his only front row start if it was at any other track but Spa, where he appeared a sitting duck on the Kemmel straight.

He was involved in more than a fair share of incidents, too, most not of his own making - and deserves credit in particular for a spectacular drive back into the points after being spun around at Jerez.

His progress, obviously, was nowhere near as notable as Orudzhev's, but it was a decent season for somebody out of Formula 3.

After two mixed years in Formula Renault 2.0, Malja wasn't the most well-known quantity heading into FR3.5 - but the Swede got along nicely with the step-up to more powerful machinery.

Qualifying a sublime second for his debut, he was sent to the back for a ride height issue and had to wait until Hungaroring to claim his first podium.

Yet he started reliably racking up the points from that point on and was oh-so-close to a maiden win in the wet-dry-wet race at the Nurburgring, passing teammate Ellinas on the final lap only to be re-passed a few corners later.

A strong rookie season behind his belt, it is stands to reason that Malja would transition to FR3.5's RPM-run successor. However, he did enjoy a reasonably strong one-off in GP2 in 2015 and would not be out of his depth there either.

Having a vastly less experienced teammate in Indonesian driver Sean Gelael was always going to mean that Dillmann would have to do most of the heavy lifting - and there was some major heavy lifting to be done, with Carlin coming back to FR3.5 after an uncompetitive 2013 and a subsequent hiatus.

Despite the fact he never raced in FR3.5 before, Dillmann turned out to be a good choice for the British team, qualifying well and reliably banking points - the Frenchman finished fifth or sixth on nine occasions.

By the end of the season, they looked like a race-winning combination, but a victory bid at Le Mans was scuppered by a slow pit stop, while Dillmann's only pole of the season at Jerez came to nothing thanks to a puncture while battling Oliver Rowland.

Carlin should be reasonably happy with its Frenchman - and perhaps Dillmann and Gelael could make up a package deal of sorts to move to GP2 next year.

Stoneman's return to single-seaters and general brilliance in GP3 was one of the big feel-good stories of 2014 and the fact that he was picked up by Red Bull made it even better.

But with the weight of expectations that comes with a DAMS seat and with McLaren protege Nyck de Vries as his teammate, it was always going to be a much tougher year for the Brit.

That said, he started strong, with three podiums in the first four races, yet there would be only one more top-three finish throughout the rest of the season as fellow newcomers eventually overhauled him on sheer form.

He seemed at his best when DAMS weren't on top and, given the amount of times he got crashed into early on in races, a 30-point deficit to de Vries is slightly unfair - but it's hard to deny the Dutchman was just that bit quicker.

The fact Ellinas spent most of 2014 on the sidelines was nothing if not massively unfair, considering that this is a driver who challenged Alex Lynn and Rowland back in their FR2.0 UK days and then made a strong name for himself in GP3.

And, in his first full season in the big leagues, the Cypriot delivered accordingly, adding two wins for Strakka to the earlier two achieved by Will Stevens last year.

For the most part, he was probably the third-quickest driver in the field (if a bit more experienced than other newcomers), albeit it is unlikely he would've troubled the leading duo even without the retirements.

Another graduate of the Eurocup, Orudzhev was eye-catching on occasions in his Formula Renault 2.0 stint, but never did win a race. However, he made up for it fully in FR3.5.

He got his first win out of the way relatively early on with a superb defensive drive at the Hungaroring and confirmed it was no fluke with great late-season form at Le Mans and Jerez.

He won at the former, fighting off Matthieu Vaxiviere, and could've ended the campaign with four consecutive podiums if not for a puncture in the final race after contact with the Frenchman.

Orudzhev is testing with Arden in the first post-season tests at Jerez and, going by this year, he has probably earned himself a rather hefty discount for 2016.

McLaren protege de Vries had some big shoes to fill coming into FR3.5 - the three previous Eurocup champions to make the switch all finished in the top two in the standings.

And while he didn't manage to keep up that streak, there was no shortage of evidence for why McLaren continues to keep him on the books.

Having come within two corners of a win in the first round at Aragon (before being passed by Vaxiviere), he did finally get his maiden triumph in the season finale at another Spanish venue Jerez - and in quite some style.

There were a fair few costly mistakes, but when it came down to it and the team was at its strongest, it was de Vries who was the quicker driver of DAMS' impressive duo.

Two years ago, after two rather disappointing seasons in FR2.0, you'd have to imagine Vaxiviere would've gladly settled for finishing second in an FR3.5 season.

But the Frenchman seemed legitimately upset by it and rightly so, as 2015 saw him emerge as one of the most entertaining, spectacular drivers in the series history.

A sublime qualifier for a massively improved Lotus squad, Vaxiviere was a joy to behold on the track, his last-lap pass on de Vries for a maiden win at Aragon standing as one of the highlights of the season.

He was so often quickest in the field that it was uncanny just how frequently he ended up behind the one driver who mattered the most - usually through bad starts, sometimes through slow pit stops.

Yet that shouldn't cast a shadow over what was a fantastic season and, instead, it's just simply great for the sport that Vaxiviere had decided to stick with single-seaters two years ago.

In a just, sensible world, Rowland would have several contracts with F1 teams on his table, awaiting his signature - yet in reality, in all likelihood, he'll probably have to go through GP2 next.

The Fortec driver's season was fantastic in every aspect. He was brutally consistent, he was very quick and he barely made any mistakes.

When he wasn't the fastest driver in qualifying, he passed his way to the front, either over the opening laps or just off the line, like at the Hungaroring, where he went from fifth to first before Turn 1.

When he was fastest, he usually just disappeared into the distance - and while he did allow a couple of mistakes later on in the season, they didn't end up mattering in the championship picture.

The fact he managed to seal the title one round in advance despite the sheer speed of his rival Vaxiviere just underlines how good this title campaign was.