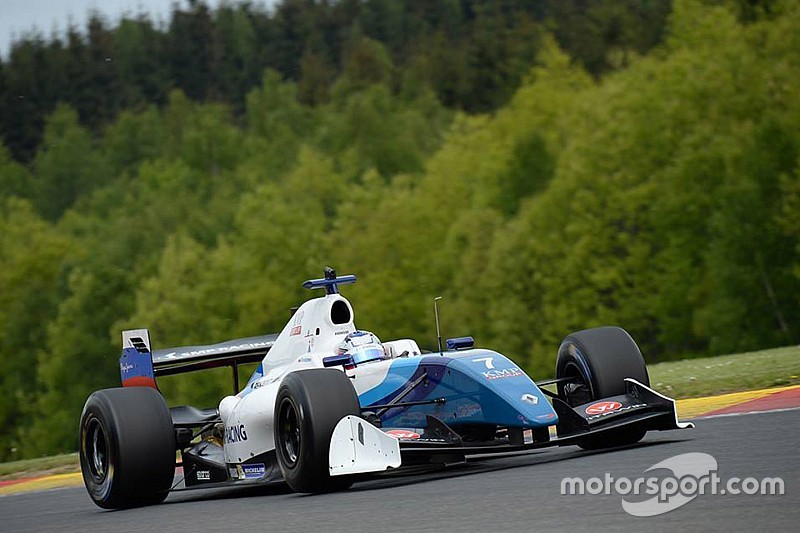 Egor Orudzhev put an end to his difficult start to the Formula V8 3.5 season by winning the first race at Spa-Francorchamps.

Starting on the front row after Matthieu Vaxiviere's exclusion from qualifying, the Russian took the lead thanks to a poor start from pole-sitter Aurelien Panis.

Behind Orudzhev, Tom Dillmann slotted in second following a successful move on Rene Binder along the Kemmel straight.

Dillmann spent the first half of the race less than a second behind Orudzhev, but did not attempt to pass the Arden driver.

His first opportunity came when the Russian ran slightly wide at Campus, also allowing Louis Deletraz to close in on.

Deletraz flew past Dillmann after Eau Rouge only to fall back behind at the braking zone, the championship leader retaking second on the outside line of Les Combes.

Orudzhev managed to build a lead of 1.6s but he was only safe for a handful of laps before Dillmann closed the gap back to half a second.

On lap 14, Orudzhev outbraked himself at the Bus Stop, and Dillmann forced his way past at Turn 1 but had to surrender at Les Combes.

Dillmann continued to put pressure on Orudzhev and the latter soon made another error at La Source, which saw him lose the lead and get it back in similar fashion.

With one more lap to go, Orudzhev did not make any more mistakes and ended up victorious, just two tenths ahead of Dillmann.

Deletraz completed the podium ahead of Yu Kanamaru, who passed Rene Binder for fourth.

Johnny Cecotto and Pietro Fittipaldi collided on the last lap from sixth and seventh, promoting Vitor Baptista and Beitske Visser.

Panis, Giuseppe Cipriani and Alfonso Celis completed the top 10, the latter losing nearly a minute on the opening lap.

Vaxiviere failed to make it to the points despite running as high as sixth after the start as he soon dropped behind and retired in the pits.

Roy Nissany also failed to complete the race, while Matevos Isaakyan crashed on the sighting lap.