Revenge is sweet for Guerrieri at Silverstone

At Silverstone this afternoon Esteban Guerrieri (ISR) got revenge for his disqualification from Saturday's race on the most minor of technicalities by snatching the lead from Daniel Ricciardo (Tech 1 Racing) on the penultimate lap of what had to ...

At Silverstone this afternoon Esteban Guerrieri (ISR) got revenge for his disqualification from Saturday's race on the most minor of technicalities by snatching the lead from Daniel Ricciardo (Tech 1 Racing) on the penultimate lap of what had to that point been a somewhat processional race. Meanwhile, yesterday's winner, Jean-Eric Vergne (Tech 1 Racing) claimed 3rd in only his second WSbR race weekend. 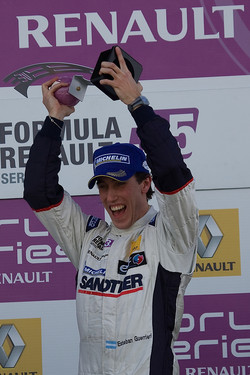 Prior to the start life was proving interesting for a number of people, starting with Jon Lancaster (Fortec Motorsport). He qualified on the front row but would start the race from the pit lane for causing an avoidable accident at the start of Saturday's race when he tipped Ricciardo into a roll and out of the race before they'd even got as far as Copse. With Tech 1 having to work all night to fix the car, the Australian was probably relieved to find he'd be sharing the front row with Brendon Hartley (P1 Motorsport), the Kiwi being a much more predictable prospect than Lancaster. Also starting from a very long way back (from the last slot in fact) was Comtec's Stefano Coletti, the Monegasque driver crashing heavily in qualifying just as his fastest lap was disallowed anyway. It wasn't his day and the rear end of the car looked as if it had been sat on by a very large elephant as it was craned away! That left the team with a desperate race against time to strip down and rebuild the damaged parts - they only just made it and it didn't look too pretty but it was at least in one piece and ready to be raced.

At the start, Ricciardo got away well, as did Guerrieri, while Hartley and Vergne fought over 3rd, Vergne getting the better of Hartley before the lap was out. Just for good measure Hartley also lost out to series leader Mikhail Aleshin (Carlin), but came back at the Russian, pushing him into spin that dropped him right down the order. By the time he'd sorted himself out his chances of a good points scoring result were long gone and Hartley was back in 6th. Meanwhile Guerrieri was in 2nd from Vergne, the two of them in pursuit of Ricciardo who was starting to open up a gap on Guerrieri. That helped the recovering Coletti, and also Aleshin, but he was stuck behind team-mate Jake Rosenzweig who was also having a less than wonderful day. It started to go wrong when he tangled with Greg Mansell (Comtec), putting the latter out of the race. Rosenzweig was duly awarded a drive through penalty for causing an avoidable accident. All of this mid- field nonsense wasn't hampering the leaders in anyway, and the top two were now just a distant image for Vergne, who was busy holding off Filip Salaquarda (ISR) and Anton Nebylitskiy (KMP Racing) for 3rd place. Meanwhile Sten Pentus (Fortec Motorsport) gained a place for 9th and Aleshin barged past Rosenzweig, while at the back Sergio Canamasas (Interwetten.com) fell off at Turn 3, possibly assisted by Aleshin, causing an outbreak of yellow flags that slowed everyone down for a while though it didn't stop Ricciardo setting the fastest lap of the race so far.

As the yellows were hauled back in the screen flashed up the message that the stewards would be investigating Aleshin and Canamasas for what just happened. Ahead of the Russian, whose day was getting steadily worse, Lancaster was still on the move, passing Daniil Move (Junior Lotus Racing) for 16th before getting the drop on Walter Grubmuller (P1 Motorsport) as well. And all of this before the pitstop window opened.

The top nine at this stage was still headed by Ricciardo from Guerrieri, Vergne, Salaquarda, Nebylitskiy, Hartley, Daniel Zampieri (Pons Racing), Nathana?l Berthon (International Draco Racing), Pentus and Nelson Panciatici (Junior Lotus Racing). That would of course all change as the compulsory pit stops began. First in was Hartley, presumably feeling he had nothing to lose. He was joined by Lancaster, Coletti, Move and Rosenzweig, the latter now under investigation for his part in Mansell's exit from the race.

A lap later and Pentus and Albert Costa (Epsilon-Euskadi) were the stoppers, while Ricciardo stayed out, pushing to try and build up a gap over Guerrieri to ensure that when he did stop he would be able to regain the lead. Victor Garcia (KMP Racing), Aleshin and Grubmuller were next to stop while Rosenzweig returned to the pits to serve the drive through. As he was doing that, Aleshin was setting about Garcia, the latter pitting immediately afterwards with damage to his car. Clearly Aleshin was taking being towards the rear of the field very badly indeed, because he certainly wasn't winning friends and influencing people in the slightest.

The next to pit were Berthon, Panciatici and Keisuke Kunimoto (Epsilon- Euskadi) while a lap later Ricciardo dived in from the lead. It seemed somewhat early, but as Guerrieri was now catching the Australian again perhaps it was the right call. Only time would tell. Meanwhile, Federico Leo (Pons Racing) seemed to catch himself out by spinning as he tried to pit for his compulsory stop. As Salaquarda also came in, Ricciardo rejoined the race in 8th. The early stop handed Guerrieri the lead with Vergne and Nebylitskiy 3rd, but there were still several stops to be made and a good handful of laps in which to make them. A lap later and it was starting to look as if Tech 1 had called it right with Ricciardo up to 6th and the leader of those who had already stopped. Guerrieri and Vergne both came in on the same lap, which left Nebylitskiy at the top of the order for a short while, and Zampieri, Julian Leal (International Draco Racing), Bruno Mendez (Interwetten.com) and Move still to pit.

Berthon, meanwhile, was back in again suffering from some sort of mechanical ailment that didn't seem totally terminal but that was certainly hampering his progress. He was so far back anyway that it didn't matter but he was really not having a good day.

Meanwhile it was becoming obvious that the top 3 would be back to being Ricciardo, Guerrieri and Vergne as soon as all the pit stops were completed. And so it proved. As they all settled down again, Coletti had Kunimoto and Aleshin bottled up behind him, while Berthon emerged to join in again, 3 laps down but the team seemed to want rid of him! Oh, and just for good measure, the officials were now warning of their intention to investigate the clash between Garcia and Aleshin. There were going to be an awful lot of people in the race director's office afterwards at this rate...most of them with a grievance against Aleshin! The Russian was now up to 14th and setting a series of fastest laps as he tried to ameliorate the damage. At least he wasn't going to have to try and tackle Lancaster, largely because Lancaster was now a very distant 19th after a second pit stop. He wasn't the only one losing out; Hartley had also lost ground and was now having to hold off Pentus, Costa and Panciatici for 7th, while just ahead of him Salaquarda and Nebylitskiy were squabbling over 4th.

And then it all got a bit processional, as Berthon came back in again and finally stopped flogging a dead Renault, and Lancaster came back to snatch 17th from Leo. Meanwhile, Costa had fallen back a little but was still holding onto 9th and Aleshin hacked past Kunimoto for 13th before selecting Coletti as his next victim. He was pushing hard as was Lancaster who promptly set a new fastest race lap though it wasn't helping him much. It did at least prove he still had the pace.

However, the real excitement was about to break out, with Guerrieri catching Ricciardo hand over fist on the penultimate lap of the race. He saw his chance as they came through the Luffield complex and dived through on the Australian. Ricciardo responded by snatching the place back, but it wasn't enough. At Brooklands Guerrieri made a desperate final throw of the dice, coming through to make it stick at Brooklands, victory made sweeter by the fact that it was the Tech 1 team who had protested his car yesterday over a piece of tape where pins should have been (the pins were broken and as the car was only completed 3 minutes before the pit lane opened it was a case of whatever could be done to get the thing fixed after the qualifying crash). Ricciardo was a crestfallen and disappointed 2nd, blaming himself for failing to respond when Guerrieri started to catch him, though in truth there was probably nothing he could have done to stop the eventual winner. 3rd was Vergne, delighted at another podium finish in only his 2nd 3.5 meeting. Salaquarda ended up 4th, from Nebylitskiy, Hartley, Pentus, Costa and Panciatici. 11th was Leal, from Aleshin, Coletti, Kunimoto, Grubmuller, Mendez, Lancaster, Leo, Move and Rosenzweig. The final classified runner, in 21st, was Garcia.