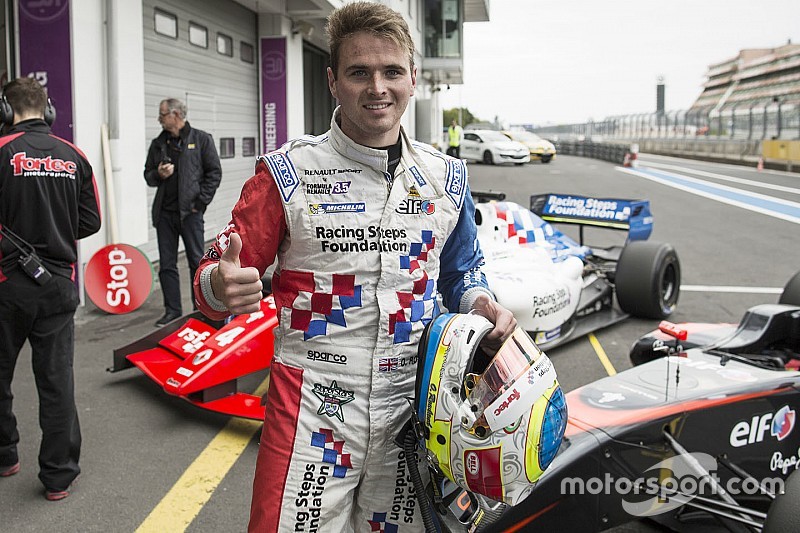 Fortec's Oliver Rowland eased to his sixth victory of the 2015 Formula Renault 3.5 season, successfully converting his pole position in the first Nurburgring race.

The Briton's win now sees him 49 points clear of nearest rival Matthieu Vaxiviere, the Frenchman having had to do with a fourth-place finish.

While Rowland delivered his usual good start, Tio Ellinas was somewhat slow off the line alongside and wound up going three-wide into Turn 1 with both Nyck de Vries and Tom Dillmann on his inside.

The Dutchman moved up into second, while Dillmann and Ellinas went wide, allowing Jazeman Jaafar and Vaxiviere through as well.

Over the first few laps, Rowland stretched his advantage over de Vries to three seconds as the rest of the frontrunners spread out behind them.

However, the field would be bunched up soon enough - with the safety car coming out after nine laps for two separate incidents.

First, Nicholas Latifi tried to pass Alfonso Celis for P11 with a late dive down the inside at Turn 1, but spun his car around and got stuck in the gravel.

But he avoided a much bigger accident when Bruno Bonifacio missed his braking point at the very same corner and slid next to the Canadian's stranded car.

The race restarted with 16 minutes left on the clock, Rowland needing just one sector to take his lead back to a full second.

Yet this time, de Vries managed to keep in touch, maintaining pace with Rowland as the laps ticked on.

Still, the Dutchman never got close enough to challenge, settling for his third runner-up finish of the campaign.

Vaxiviere kept on trying to salvage points as he attacked Rowland's teammate Jaafar for third, even diving down the inside of the Fortec driver with two minutes to go - but he ran wide, allowing Jaafar to easily retake the spot and complete the podium.

Yu Kanamaru's debut FR3.5 race yielded 12th place as he finished half a second up on fellow debutant and teammate Rene Binder.