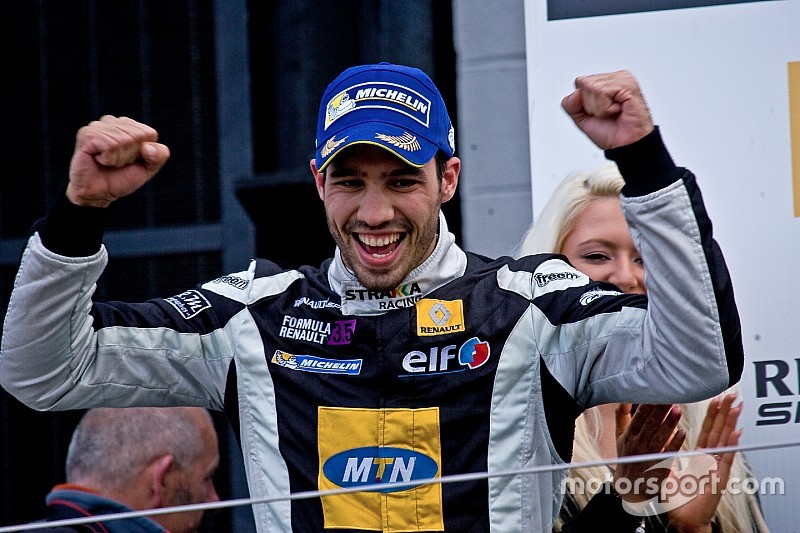 A well-timed safety car and changing weather conditions have seen Tio Ellinas lead Strakka's first 1-2 in a dramatic Sunday race at the Nuburgring.

With the team nailing its pit strategy, the race win came down to teammates Ellinas and Gustav Malja - and it was the former who persevered.

The track conditions promised a very chaotic start to the race, with a number of drivers opting to go with slicks and others gambling on wets - some teams going as far as to split strategies between their race cars.

And the start duly delivered in chaos, especially for the championship-leading Fortec squad - with poleman Oliver Rowland bogging down off the line and his teammate Jazeman Jaafar failing to get going at all.

Pietro Fantin assumed the lead with Rowland set to emerge out of turn one in fourth or fifth, but the Briton got spun around on corner exit and was to the back of the field.

However, he was in luck as, while the wet tyre seemed advantageous over the opening lap, it was soon clear the slicks were the correct choice - with Fantin establishing a massive lead in the early minutes.

The different tyre compounds, meanwhile, provided for lots of wheel-to-wheel action, with Roy Nissany picking up a puncture after starting in third place, Bruno Bonifacio and Malja making contact and, finally, Aurelien Panis getting stuck in the runoff at Turn 1.

That last incident brought out the safety car and, while several drivers, led by Malja and Ellinas, had completed their mandatory stops, the frontrunners did not.

Fantin's 15-second lead was evaporated and he now had title rivals Matthieu Vaxiviere and Rowland behind him as the race resumed.

At the restart, the Brazilian quickly pulled clear of Vaxiviere while Rowland opted to take his stop shortly thereafter, emerging out of the pits in 14th place.

But the leaders - Fantin, Vaxiviere and Dean Stoneman - decided to stay out, making use of the extended pit window, and were finding more than a second per lap on the group of those who already stopped.

That group was now led by Ellinas, the Cypriot having passed Malja right after the restart for what was in effect the lead of the race.

On lap 16, Stoneman was the first of the leading trio to take to the pits and emerged ahead of Rowland, his compatriot still running outside of the points.

Vaxiviere stopped next time by, returning to the track in eighth place, while Fantin did his mandatory stop on lap 18 and exiting the pits in sixth.

With the race in its final minutes, Ellinas looked set to take a comfortable win yet the rain returned, throwing a spanner in the works and dropping him into the clutches of Malja.

The Swede was into the lead at one point on the final lap, but Ellinas came back through and held on to take the win.

Egor Orudzhev, set to complete the podium, ran wide on several occasions and dropped down to sixth, with third place inherited by Nyck de Vries.

Fantin originally recovered to fourth, but got a penalty for pitting too late and gave up the spot to Alfonso Celis, who recorded his career-best finish.

Stoneman took fifth, with Marlon Stockinger in seventh and debutant Rene Binder in eighth place, all gaining a spot due to Fantin's penalty.

Despite another spin later on, Rowland managed to take the final point ahead of Vaxiviere and now leads the Frenchman by an even 50 points.