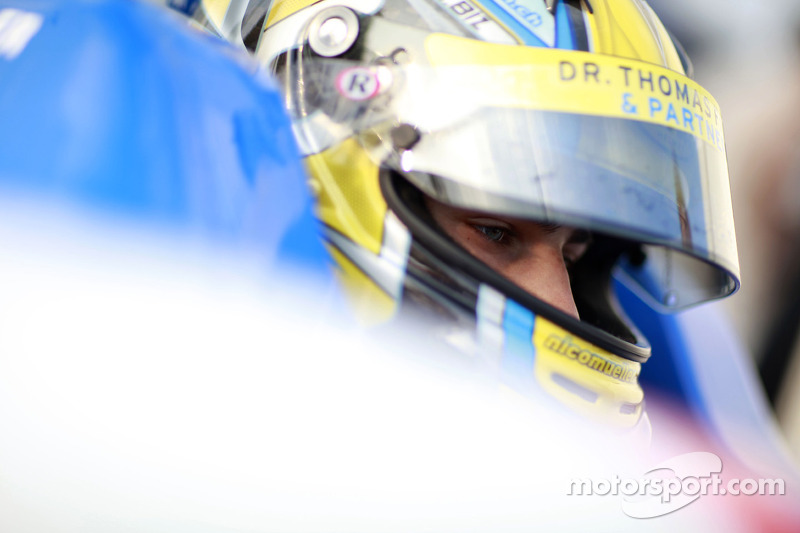 Nico Müller (International Draco Racing) started on pole and produced the perfect drive on the streets of Monaco, winning the race and taking his maiden Formula Renault 3.5 Series victory. The Swiss finished ahead of Marco Sørensen (Lotus), who overtook Jazeman Jaafar (Carlin) at turn one. Kevin Magnussen (DAMS) finished fourth to retain the championship lead, with a 14-point advantage over Stoffel Vandoorne (Fortec Motorsports).

There were several famous faces present for the Formula Renault 3.5 Series race, the curtain-raiser for Monaco’s 71st Formula One Grand Prix. In glorious sunshine, Jacky Ickx, Jean Alesi, Tom Kristensen, Jean Ragnotti and Paul Belmondo could all be seen on the grid, with the latter arriving in the Megane RS Red Bull Racing RB8.

Nico Müller started on pole and made a perfect getaway, while alongside him, Jazeman Jaafar had too much wheelspin and allowed Marco Sorensen to pass into second at Sainte-Dévote. Marlon Stockinger’s race finished at turn one, with Sørensen’s Lotus team-mate spinning after contact and becoming the first driver to retire.

With the race under control, Nico Müller and Marco Sorensen began to pull away from the rest of the field. Behind them was an extremely compact group, composed of Jaafar, Sainz, Magnussen and Da Costa. Further back, Christopher Zanella (ISR) narrowly avoided going off the track after clipping the barrier at the exit of the tunnel section. The Swiss then returned to the pits to change a rear wheel. After ten laps, the front four were well separated from the chasing pack. Kevin Magnussen, however, remained under constant pressure from Antonio Félix da Costa.

The race order did not change again until lap 14, when Carlos Sainz Jr misjudged his braking at La Rascasse and allowed Kevin Magnussen and Antonio Félix da Costa to pass. Christopher Zanella then retired at the same spot after crashing out. But thanks to the efficiency of the Automobile Club de Monaco’s race marshals, his car was removed without the need to bring out the safety car.

With two laps to go, Antonio Félix da Costa began to step up his assault on Kevin Magnussen’s position. But the Dane, determined to score as many points as possible and maintain his championship lead, kept the door shut and held on to take the chequered flag in fourth.

Nico Müller: "I was in a position that allowed me to control the race. The car was very good and I would just like to thank the team for their hard work. I tried to gauge Marco’s level of performance adapt my own pace accordingly. Winning in Monaco is obviously special, but it’s only one race. We’ll have to do it all over again at Spa."

Marco Sørensen: "I made a really good start and Jazeman tried to block me, but I was already there and he couldn’t do anything about it. I then had to keep the car on the track and maintain pressure on the leader, but Nico isn’t the kind of driver to make stupid mistakes."

Jazeman Jaafar: "My start was far from perfect – unlike Marco’s, which was superb. I tried to hold him off but I slipped down into third. I then pushed hard to avoid the threat of Kevin Magnussen. This first podium finish is a good result for me."

Zeta Corse shines with Sainz and Yelloly on qualifying in Monaco

Kevin Magnussen does the job in Monaco