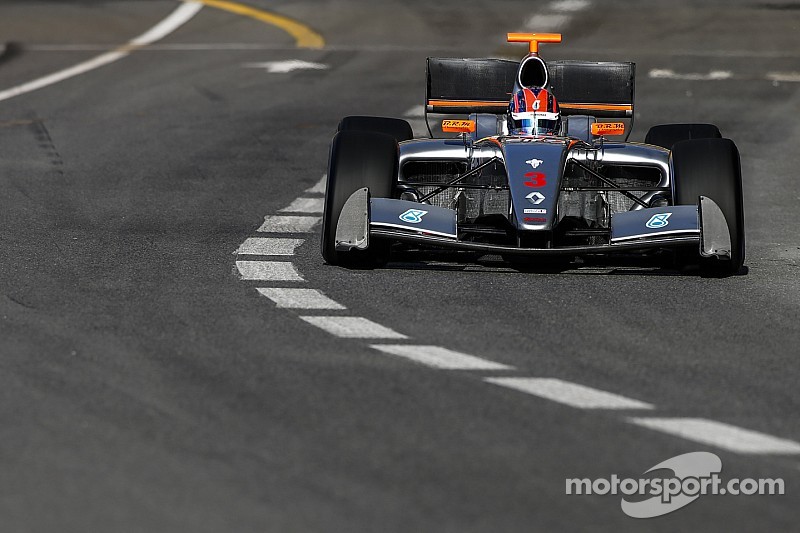 Jazeman Jaafar took a comfortable lights-to-flag victory in a chaotic Formula Renault 3.5 race around the streets of Monaco that was interrupted by an early red flag.

The Malaysian driver warded off his fast-starting Fortec teammate Oliver Rowland heading into Ste Devote at the start, and was never seriously threatened for the remainder of the race.

Rowland had made the perfect getaway from second on the grid, almost drawing ahead of Jaafar, but backed out of the move and was tagged by Matthieu Vaxiviere, triggering a multi-car shunt in which Nyck de Vries, Tio Ellinas and Gustav Malja were all also caught up.

Swift work by the marshals ensured there was no need for a safety car, but the red flags were needed just a couple of laps later as Meindert van Buuren misjudged his braking while lining up a pass on Bruno Bonifacio at the same corner.

The result of Van Buuren’s error was that his Lotus-run machine launched scarily over the rear of Bonifacio’s car, both piling into the barriers at Ste Devote at barely abated speed. Van Buuren was unscathed, but Bonifacio was escorted from the scene on a stretcher.

Draco Racing later reported that Bonifacio had been taken to hospital for precautionary checks, but escaped serious injury - though he was suffering from neck and back pain.

Less than 20 minutes remained on the clock when proceedings got back under way, with Jaafar leading Dean Stoneman, Tom Dillmann, Egor Orudzhev and Pietro Fantin out front.

That’s how the order would stay for the remaining laps, with Jaafar stretching out a 3.2 second lead to take his first ever Formula Renault 3.5 win.

Behind the top five, the star of the race was a recovering Rowland, who set about scything his way through the pack after the restart, pulling off some incredible passes in unlikely locations.

The first of these was at Beitske Visser’s expense at Mirabeau Bas, with Roy Nissany then succumbing to the charging Brit at Rascasse.

Pons duo Philo Paz Armand and Alex Fontana were next to fall, at the Nouvelle Chicane and Mirabeau respectively, Rowland then dispatching Sean Gelael at the chicane to move into seventh.

Aurelien Panis – son of 1996 Monaco Grand Prix winner Olivier – proved a tougher nut to crack, but Rowland was able to force his way by at the second part of the Swimming Pool complex in an audacious manoeuvre after several laps of shadowing the Frenchman.

This put Rowland sixth, where the Racing Steps Foundation-backed racer would remain, with Panis, Gelael, Fontana and Armand rounding out the top 10 after de Vries was given a 10 second penalty for making contact with Nissany at Rascasse.