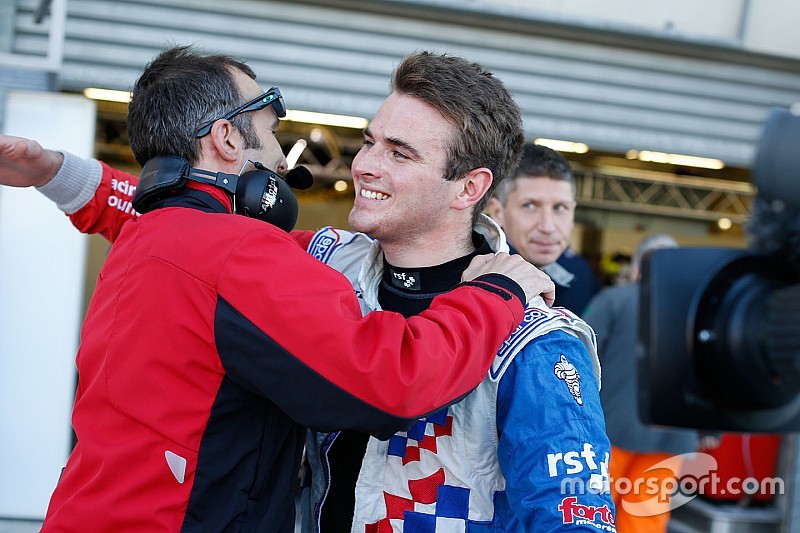 Starting 14th following a low-key qualifying, Rowland only had to finish in the top ten to wrap up the championship and the Briton delivered the crown by bringing the car home in a safe eighth.

While Vaxiviere could have only stayed in contention with a victory, his chances faded as he bogged down at the start and ended up seventh after the opening lap.

Polesitter Tio Ellinas on the other hand, had a good launch off the line to stay ahead and, despite being forced to cut the Dunlop chicane, led the way with Tom Dillmann,  Orudzhev and Aurelien Panis lining up behind him.

On lap 5, the safety car was out when a dive from Yu Kanamaru on Andre Negrao into Dunlop sent the Brazilian into a barrel roll.

There were no position changes at the restart but it was Dillmann leading next time around as Ellinas went in to change tyres, with Dean Stoneman and Rowland following him into the pits.

Dillmann reacted by pitting a lap later after setting two purple sectors but a relatively slow stop not only cost him the chance of claiming the lead but dropped behind Stoneman as well.

The next lap saw the final driver from the original top three, Orudzhev, make his mandatory pitstop and the Russian was promoted into the provisional lead.

Vaxiviere, refusing to give up, put massive pressure on sixth-placed Nyck de Vries in the early laps and was the sole frontrunner deciding to stay out as long as possible as he tried take the lead by going fastest in clean air.

Recording the quickest lap of the race and taking advantage of Stoneman attacking Ellinas, the Lotus driver emerged in second after his stop, 2.1s behind Orudzhev.

He wasted no time getting up to speed and two quick laps saw him halving the gap to the SMP-backed Russian.

However, Orudzhev did not put a foot wrong and, similarly to his maiden victory at the Hungaroring, took the chequered flag after a great defensive drive, forcing Vaxiviere to settle for second.

Ellinas and Stoneman fought it out for the final podium position with the Cypriot eventually holding on, as Dillmann ended up fifth.

The top ten was rounded out by Gustav Malja, de Vries and Marlon Stockinger.