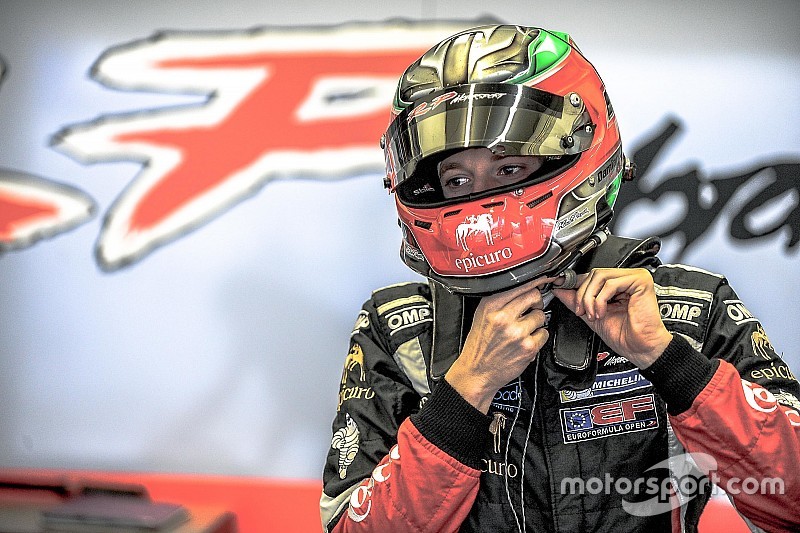 Italian driver Damiano Fioravanti will step up from Euroformula Open to Formula V8 3.5 with RP Motorsport.

Fioravanti, 20, started his single-seater career in 2013 in the European F3 Open series, which is now known as Euroformula Open.

While he could not score any points in his rookie season and only raced in seven races the next year, he joined RP Motorsport for 2015, claiming his first win at Monza and finishing seventh overall.

Returning for a fourth campaign, Fioravanti ended up as the top RP driver in 2016 but only took fifth in the standings, failing to win again.

"It represents an extraordinary opportunity for me and I am very excited to start this new adventure. It is a step that comes at the right time in my career, after seasons of precious experience in the Euroformula Open championship.

"I already tested the car last December in Jerez and the feeling was really good, thanks to a fantastic staff of engineers and mechanics whom I already knew in the last two years.

"It will certainly be an exciting challenge in a very prestigious championship: I would like to thank especially my father for its efforts in supporting my career, as well as Fabio Pampado and Niki Rocca from RP Motorsport Racing. Now it’s up to me to repay their trust."

RP team boss Pampado added: "We are delighted to continue our partnership with Damiano, who has already shown his talent in the previous two years with our team in Euroformula Open.

"It’s a step further in his professional career, and the decision to give him one of our two cars in such a competitive championship is a sign of confidence that we are sure will be rewarded in the best way.

"In previous testing has revealed its full potential, so we look forward to getting back on track in order to prepare our second season in this discipline in the best way."