Carlos Sainz: “This has to be my year“

Carlos Sainz has dominated the first half of the season with four wins from seven starts.

Championship leader in the Formula Renault 3.5 Series heading to the meeting at the Moscow Raceway, Carlos Sainz has dominated the first half of the season with four wins from seven starts. Second in the 2011 Eurocup Formula Renault 2.0, the son of the two-time World Rally Champion still remains prudent for the rest of the year and isn’t taking anything for granted after what was a complicated 2013 campaign.

Inevitably, Carlos Sainz is asked why he chose open-wheel racing over rallying, taking into account the pedigree of his father in the sport.

“It is very simple,“ explains the Spaniard. “When I was nine-years old, Fernando Alonso began to win in F1. Alonso was on television all the time. There was only him. My father had already retired and rallying in Spain is relative. So, I started go-karting. Then, when I was 15 and when Red Bull calls, you say yes “

After a highly successful run in karting he began his single-seater career in 2010. He was the top rookie in Formula BMW Europe before stepping into Eurocup Formula Renault 2.0 at the end of the year, taking his maiden podium finish in his first race at Silverstone. 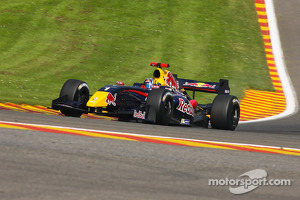 In 2011, Carlos Sainz focused on Formula Renault 2.0, winning the North European Cup with ten wins and 17 podium finishes in 20 races! In the Eurocup, he lost out to Robin Frijns for the title, but finished ahead of his team-mate and fellow Red Bull Junior Team member, Daniil Kvyat.

Entered in Formula 3 the following year, Carlos Sainz didn’t enjoy the success that was expected despite some fine performances. In 2013, he switched to GP3 where Daniil Kvyat wound up winning the championship. During this season, the Spanish driver decided to return to the World Series by Renault, this time in the Formula Renault 3.5 Series.

Carlos Sainz made his debut with the Zeta Course team in the streets of Monaco. This difficult challenge was mastered with fifth place on the starting grid and sixth place in the race. Also showing his speed at Spa, Carlos Sainz returned for the final three meetings where he scored points in two races and set one fastest race lap. At the same time, he made his debut in Formula 1 during the young drivers test at Silverstone, impressing his team and the observers. At the end of the year, it was Daniil Kvyat who was chosen to join Scuderia Toro Rosso.

“After this mixed 2013 season, I knew I wasn’t going to have my chance”, admits the Spaniard. “Since then, a lot has happened, some of which hasn’t been easy to digest. Whether it was my fault or not, I had to make a lot of changes during the off-season. I also have to thank Red Bull for giving me one more opportunity. This has to be my year!”

Back in 2014 to win the title, Carlos Sainz joined DAMS with whom he leads the championship before the mid-way point of the season. “A lot of work has gone into this success”, he confirms. “More than you can imagine. I spend two days at Le Mans with DAMS, before heading to the simulator with Red Bull. I do this each time and all this work has paid off.”

All of this has taken place under the watchful eye of his father. “I like it that he is by my side, but he doesn’t look at my data, nor does he analyse my driving. He lets me look after the set-ups with the team because he has complete confidence in us. He wants me to go my own way and become my own man.”

“Thanks to his experience, if I have any kind of doubts, I can ask him what he would do in such a situation. No matter the category, to have a world champion close to you helps in knowing what attitude is needed to be adopted to become a world champion. He gave me a lot of support during the winter in telling me that if I wanted to become a champion, I had to change.”

With five pole positions and four victories in seven races, the Spaniard has a 43-point lead before heading to Russia and is on track to reaching his stated goal, while keeping his feet firmly planted on the ground. “Now, it’s happy days but it’s going to be a much more difficult fight. The next challenge is Moscow and I don’t know the track, so it will probably be a difficult weekend!”

Carlos Sainz and DAMS dominate in the Ardennes!