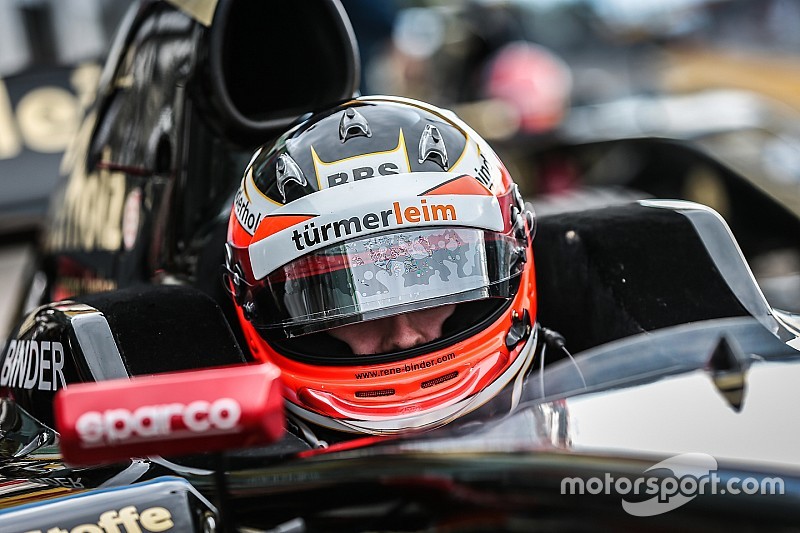 Rene Binder claimed a lights-to-flag victory in the last Formula V8 3.5 race as he led teammate Pietro Fittipaldi across the line in Bahrain.

At the start, Binder held off an early challenge from newly-crowned champion Fittipaldi as the field squeezed its way round the first corner.

Fittipaldi did attempt to claim the lead in the opening stages of the 40-minute race but Binder was too strong defensively and held off the Brazilian’s advances.

Not so fortunate at the start was championship runner-up Matevos Isaakyan as the SMP Racing/AVF driver failed to get away at the start of the race in an incident that appeared similar to the transmission problems that hampered him in yesterday’s race.

As the grid weaved their way up to turn four, Isaakyan’s teammate Konstantin Tereschenko was tapped into a spin coming out of the third corner and the Russian had to retire the car.

A lap later, Alfonso Celis Jr and race one winner Henrique Chaves collided at turn one as Celis caught the rear of Chaves’ AVF car. The pair got restarted but Celis had to pit for a new wing.

The Fortec driver’s early stop cost him dearly as he fell to ninth and was later penalised 20 seconds for making his only stop outside the pit window.

Binder and Fittipaldi had no such issues in their own stops as the pair pitted with half an hour to go. Fittipaldi was the first in for fresh rear tyres and a fast out-lap gave him the opportunity to attack Binder as the Austrian came out of the pits a lap later.

However, Binder was again too strong defensively and hung on to claim his fourth win of the season.

Behind them, Tatiana Calderon claimed a debut podium, benefitting from drive-through penalties for Yu Kanamaru and Diego Menchaca after the pair were involved in an incident in the opening stages of the race.

Kanamaru was adjudged to have forced the Fortec driver onto the run-off going up to turn four, but Menchaca then received a penalty for passing the RP Motorsport driver under yellow flags during the same incident.

The pair finished sixth and seventh respectively, with their penalties allowing Roy Nissany and Chaves to claim fourth and fifth.

Celis and Isaakyan rounded out the field in eighth and ninth.