Brown: Teams must be open to "sacrifices" for benefit of F1 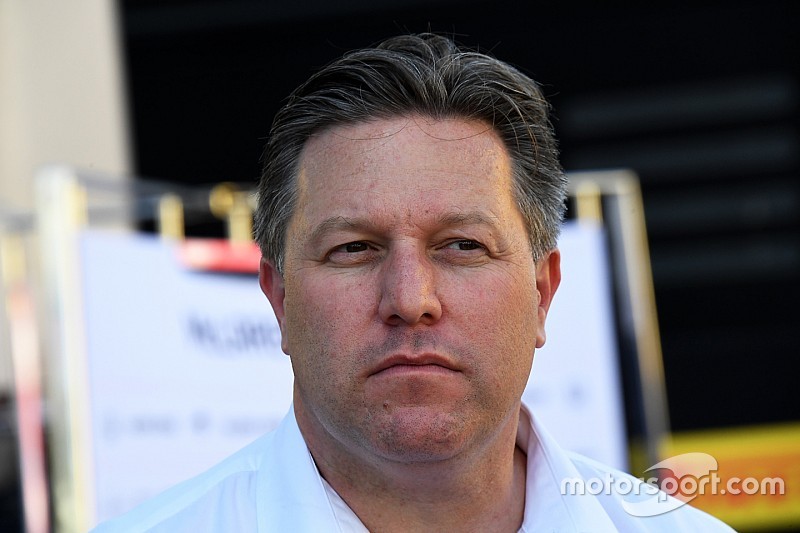 With Liberty approaching its first half season in charge of grand prix racing, Brown says recent talks with the sport’s bosses has left him hugely encouraged about the direction they want to take F1 in.

But he readily accepts that if F1 is going to attract new fans and achieve a more-sustainable future – perhaps through the introduction of a cost cap or independent engines – then it is the duty of the current competitors to give up some ground they currently have ether in financial or power terms.

“We need to do what is right for the sport,” said Brown. “That is Chase Carey’s [F1 chairman] job, and it is not going to be easy, but McLaren are prepared to make some sacrifices for the good of the sport.

“Ultimately, what is for the good for the sport will come back and be better for us all. So we are prepared to make some short-term sacrifices, because we think it will be better for the long term – so it doesn’t feel like a sacrifice.

"This is a time where I think we all need to work together to grow the sport. We are taking a 10-year plus view, not the next couple of years. We should have up to six teams capable of winning races, because that is what the fans want.”

However, he thinks it is more important that the biggest push at the moment is to make F1 more engaging for fans. This has resulted in a number of positive initiatives – including the F1 Live in London event this week.

Brown added: “The new F1, the next era, is all about the fan. We know the fans want to follow the sport, they want great entertainment and they love the technology. And it needs to be in that sequence – not technology first. We need to make those decisions.

“The cars can still be technical, but we need to make the drivers come out. There are ways to engineer the rules to make driving a more important part of the equation - and I think then that will get more exciting racing, more exciting personalities, and diversity on the grid.

“On the engine front we need manufacturers, but we also need a lower cost engine and an independent competitive supplier. It can’t be an independent engine that just makes up the numbers .

"Too many teams over the years have been compromised by not being able to take an engine off the shelf like the good old days.”

Brown has also continued his calls for F1 to move towards a cost cap arrangement, to limit the budgets being spent my teams.

“I think absolutely we need a cost cap. I think cost containment is impossible to achieve, because if you have the money then you will spend it – period, end of story. I think a cost cap can be policed.

“Then in terms of revenue, we are one of the big teams that benefits from the CCB [Constructors’ Championship Bonus]. I don’t think it should be equal across the playing field, but I think it needs to be more balanced

“Doing this will bring more competitiveness. And to have the odd race that the underdog wins is great for everyone.

A roadmap for the future

While longer-term changes like a revenue redistribution will likely be quite hard to reach consensus on, Brown sees room for short-term tweaks to get everyone’s backing – including perhaps handing more power to Liberty.

"But I think it is ridiculous that we had to approve Haas’ paint scheme – do whatever you want.

"I think it is ridiculous that we will have to approve if Force India wants to change its name. Change it, it is your team.

“We need to certainly have a voice because we know best on how to run a race team, so I am not saying give it all to Liberty, but we do need to let them run it more than they can right now.”

Brown believes that the three men currently in charge of F1 are the right mix, and that fans are the ones set to benefit the most from where the sport is heading.

“I have a lot of confidence in the people running the sport – Chase, Sean [Bratches], Ross [Brawn]. They are going to do the right thing for the sport. I think we do need to be saved from ourselves.

“The fan engagement stuff they are ramping up is great too. The event in London, great. The walk of fame in Austria. Great.

“So all that fan engagement, it all comes back to if we have more fans who love our sport, everything else will take care of itself. TV revenue will go up because more people are watching. Tracks will be more successful because we will get more sponsors because we get more fans.

“If we just keep that fan filter as our first focus, then the sport will go on to do great things. I am very bullish for where this is headed.”