A stalwart of the Brackley based team since its days as BAR, 56-year-old Briton Fry, 56, is vacating his role as chief executive, according to a report in the Guardian newspaper.

He will be replaced by new shareholder and director Toto Wolff, who many regard as the new main 'boss' of Mercedes, despite Ross Brawn still being team principal. 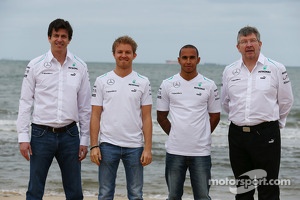 Fry's departure is the latest major move at the team in the recent past, after Wolff, Lewis Hamilton and Niki Lauda arrived, Paddy Lowe looks set to join, and Norbert Haug and Michael Schumacher departed.

The Guardian report, written by correspondent Paul Weaver from Malaysia, said Wolff's new responsibilities will involve the "mostly commercial activities" that had been Fry's chief domain.

Fry's exit, to be completed by the end of the month, "is an amicable one," the journalist added.

Massa: “we need to make sure we progress race by race”