Mercedes Formula 1 chief Toto Wolff has admitted the Emilia Romagna GP weekend is a write-off for the team after George Russell and Lewis Hamilton were powerless to move into the top 10 during Saturday's sprint race.

During Friday qualifying, Mercedes missed out on Q3 for the first time since the 2012 Japanese Grand Prix, with George Russell qualifying 11th and Lewis Hamilton down in 13th.

That made the underperforming Brackley team's exercise in damage limitation, which it had executed well in F1 2022's first three races, an extremely difficult task at Imola.

But while Mercedes was hoping to benefit from the extra Saturday sprint race to move up the order and gain a better position for Sunday's grand prix, it was stunned to find it instead made zero progress during the 21-lap sprint.

Russell finished where he started, while Hamilton even lost a spot - to AlphaTauri's Yuki Tsunoda - and is now starting from 14th instead.

Team boss Wolff admitted the weekend was a "complete write-off" and "another humbling experience" as his drivers were languishing in a midfield DRS train.

"I think points scoring needs to be the minimum, but this is not where we set our expectations and therefore this weekend is a complete write-off," Wolff conceded.

"You can say 'well, we're trying to learn', but we weren't great with tyre warm-up, that's why there is not a lot that can be really done.

"There is no miracle you can expect at the race start because the overtaking is so difficult. We can make up positions. We've shown it today but not quickly and therefore beyond the fact that we are learning it's another humbling experience."

Russell explained Mercedes was also lacking the top speed to make the most of Imola's generous DRS zone, which enabled several straightforward passes for position after Friday's wet qualifying had left several quicker cars out of position. 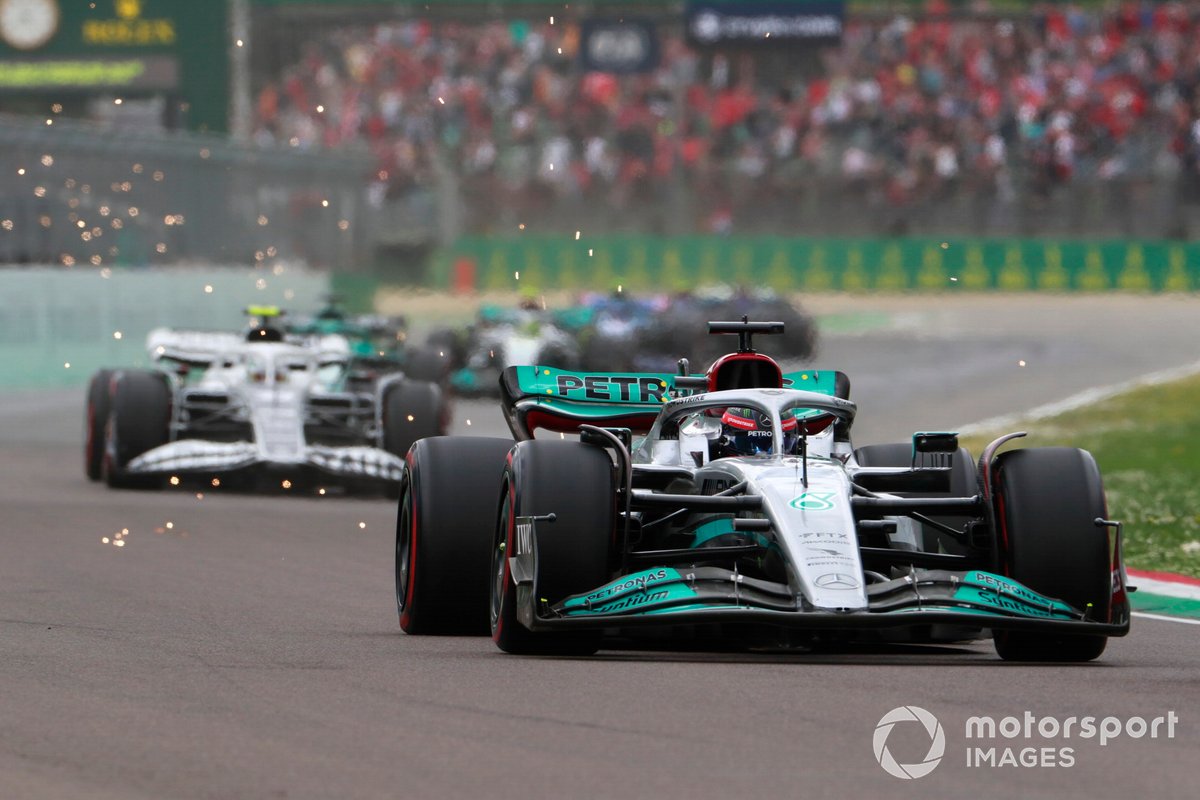 Instead, the team will be forced to employ an alternative strategy to move up the field in Sunday's race.

"It's tricky, these sprint races," Russell said. "I don't know what the rest of the race was like, but it felt processional from where we were. The race just isn't long enough to get some tyre degradation there and have some differences between the drivers and the cars, but we have got work to do.

"Strategy is going to be key and we are going to have to do something different to our competition. That will give us an opportunity to fight and move up the grid but I am sure we'll understand a bit more tonight, but it is going to be tricky.

"It has clearly been a difficult weekend for us, and we probably overachieved in the first few races. This weekend we are probably where we deserve to be."

"Ultimately we haven't got it right this year and everyone is working has hard as they can to correct it.

"We are obviously not fighting for the championship, but we are fighting to understand the car and improve and progress through the year, that is all we can hope for right now."