Toto Wolff might be a tad worried that Ross Brawn may leave the Mercedes F1 team.

With Wolff buying 30 per cent of the German team and becoming executive director, it is strongly rumoured that he has wooed McLaren's Paddy Lowe to join him.

That would appear a direct undermining of team principal and technical expert Brawn's position, with Daily Express journalist Bob McKenzie reporting that the 58-year-old is therefore "close to quitting".

Wolff said: "It's all speculation. Ross is here as part of the leading team and I hope he is going to stay."

Pressed, he added: "I have had conversations with Ross and I admire what Ross has done but I need to understand the structure."

McLaren has declined to comment, but if he does leave, 51-year-old Lowe would almost certainly have to serve some 'gardening leave'. 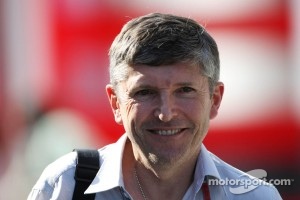 Like Brawn, the position of Mercedes' Nick Fry is reportedly also in serious doubt.

"There are many intelligent people there (at Brackley)," Wolff insisted, "and I'd like to meet them, speak to them and analyse and then make my conclusions.

"There is an organisation in place and I'd like to work with it."

As for Wolff's new role, he said he will be mainly devoted to F1, attending all the Grands Prix and the major events on the DTM calendar.

Among his first duties will be keeping tabs on injured F1 driver Robert Kubica's test this week in a Mercedes DTM car.

But Wolff played down the prospect of a return to Formula One for the Pole in the short term.

"If the DTM test goes well and we see that he is doing well in a proper race car with downforce, I think there are still some physical constraints to drive a monocoque chassis with his elbow and arm," he said.

"I think we all would love to see Robert doing well in a Formula One car in the future but that is definitely too early at this stage."

Wolff to keep Williams link 'for the moment'