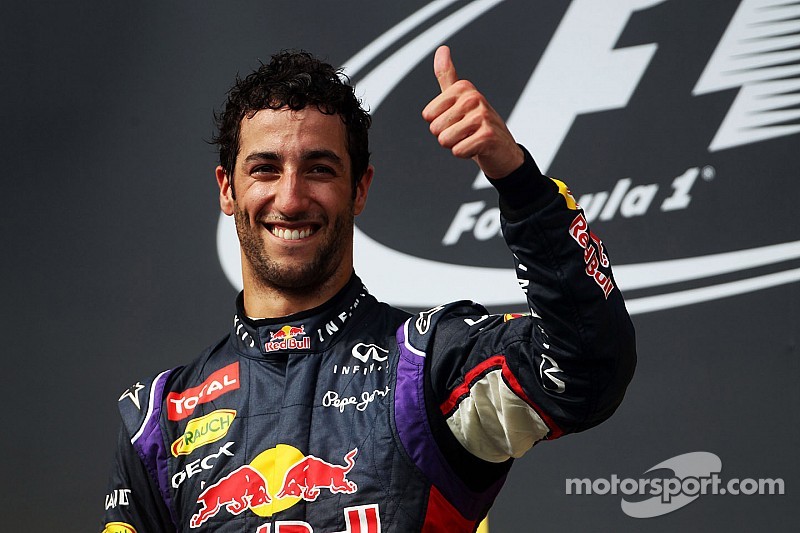 Christian Horner: “A fantastic grand prix and the performance by Daniel today was truly sensational."

Daniel Ricciardo, Finish Position: WINNER! Start Position: 4th
“Winning this today, it honestly feels as good as the first. It sank in a lot quicker this one, so crossing the line today I knew what was going on a bit more and it’s like I could enjoy it immediately rather than it being delayed, it was awesome. To have to pass guys again to win the race, as I did in Canada, makes it a lot more satisfying, knowing that we did have a bit of a fight on our hands – you beauty! In this environment now I feel, I am a different driver and in a way a different person, a different sportsman than I was last year.

I’ve got a lot more belief in myself and it’s cool, I definitely feel like I belong here now and I’ve got confidence; obviously we’ve converted two races into wins this year so far and I think that confidence is showing. I’ve got some friends from Australia here this weekend, so the plan was to always have a few drinks tonight, so I think we’ve got an excuse to now!”

Sebastian Vettel, Finish Position: 7th, Start Position: 2nd
“It wasn’t a great race. I spun, which was my mistake, and before that I was unlucky with the safety car in the first stint. The timing meant the first four cars lost positions to those running behind. Unfortunately we were then in the wrong mode for the restart and I lost two positions. It’s good for Daniel that he won today, I’m happy for him.”

Christian Horner, Team Principal: “A fantastic grand prix and the performance by Daniel today was truly sensational. Starting in wet conditions, he benefitted from being a little bit further back and being able to get in for slick tyres at the first safety car and then really managed to make his strategy work on the soft tyres through the next stages of the race. We knew we’d have to make a final stop, which would put us behind Alonso and Hamilton who were trying to get to the end. But he closed the gap down quickly and then, with some fantastic overtaking manoeuvres in the last five laps, pulled off a dramatic victory to achieve the second in his career and our second this season.

Sebastian’s afternoon was much more frustrating. Unfortunately, after a good start and some good battles, he got the call at the same time as Daniel to pit after the Caterham had an accident, but was too far round the last corner to make it into the pit lane. He then had to stop under the safety car which meant he lost some places. He was making progress but then had the spin and managed to avoid the pit wall, but he flat spotted his tyres and then had a problem at the restart. It was then a question of damage limitation, trying to run the hard tyres to the end of the race and he did a phenomenal job to keep Bottas behind him.”

Thierry Salvi, Renault: “This race was amazing but also quite difficult to manage thanks to the multiple safety cars and changing track conditions. The fuel consumption was less than expected and forced us to use different energy scenarios to recharge the car. Seb did not benefit from the first safety car and so had a lot of work to do throughout the race to recover. Daniel on the other hand had a perfect strategy and was able to extract the maximum from his car. Winning the race is a very good result for the team, and we all deserve this. A lot of effort has gone into trying to catch up and this kind of result helps everyone keep that momentum and motivation high.”

Hamilton secures Mercedes' eleventh podium of the season at Hungaroring