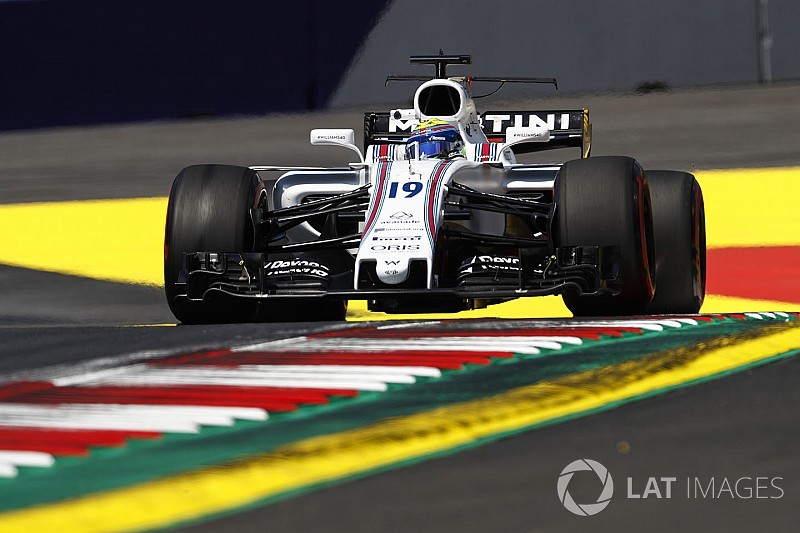 Felipe Massa says his Williams car was "not good" in Austrian Grand Prix practice on Friday, despite the latest updates introduced by the team for this weekend.

Williams has introduced an aggressive upgrade package for the Red Bull Ring weekend, including a revised front wing, new bargeboards and modified sidepods.

The bargeboards were only used in FP1 as the team doesn't have enough spares, and wanted to minimise the risk of damaging them in the afternoon.

But Massa and Lance Stroll were 11th and 15th when running the new parts in the morning, and 14th and 16th in the afternoon.

"Not good, to be honest, we didn't have a great Friday," said Massa. "We're struggling with the balance in the high speed, so there's a lot to try to understand to make the car more competitive for tomorrow. So I really hope we can do it."

Regarding the update, he said: "At least the engineers said it should be OK, the numbers and everything.

"We just took it off in the afternoon just to not damage it – and we had damage in the morning actually! We'll put it back tomorrow, and we should run with the new pieces."

Stroll, who escaped with a reprimand for crossing the pit entry white line when he made a mistake coming to pits, is confident that the car will be better on Saturday.

"There's bits and pieces to work on overnight," said the Canadian. "For sure we don't look as competitive as in Baku, for example. But that can change.

"Around here it's such a short lap, a couple of tenths gets you quite a few places. We need to look into it, for sure high speed is not our strength.

"We know our car is quick in a straight line, and not as quick around the corners. We've confirmed that over the last few events. We have the car we have, and when we get it right, it's a good car.

"Two or three tenths on paper is normally what the updates are supposed to bring, but it's always different on paper than what it is on track. Here's also a short track.

"I think it's more generally when you say two or three tenths, and here it's 10 corners or whatever."

Marko: Sainz shouldn't "bite the hand which feeds" him