Williams uncertain of running on Thursday after Stroll crash 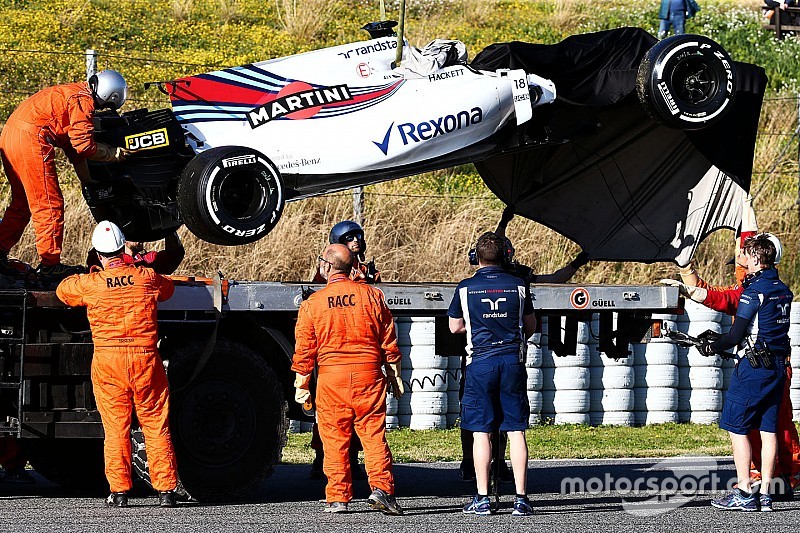 Williams is unsure if it will be able to run on the final day of this week’s Formula 1 test at Barcelona, following Lance Stroll’s latest crash.

The young Canadian hit the barriers after a spin on the exit of Turn 5 late on Wednesday afternoon – damaging the left front suspension and front wing.

With the team light on spare parts, which cost it track running on Tuesday afternoon after Stroll damaged a wing spinning across the gravel trap at Turn 9, investigations are ongoing about whether things can be repaired in time for Thursday.

Speaking about the matter, Williams performance chief Rob Smedley said: “We are still assessing all of the damage. There was a bit of damage to the left hand side of the car, and we are having a look at it.

“I cannot make a full judgement call on it, as to how much has been damaged and what the contingency will be from this point onwards until we have a little bit of time and think about it.

“There is a question mark [about running on Thursday] but we will be doing our utmost to get out. It is a really important day for testing. Today we had a good day learning about the car – and obviously we are desperate to continue that for tomorrow onwards. So our aim is to get the car out.”

Stroll said there was no firm answer as to why he had spun off the track at the end, but said he was not too disheartened by his spate of incidents.

“Racing, pushing, things happen,” he said. “You just have to figure out how to make the best of it. Everyone’s quite positive. It was a good day. It was obviously unfortunate what happened at the end, but little issues and things like that happen and you have to move forward.

“There was an issue on the car. I was kind of a victim of the situation. We are still figuring it out so I can’t give you any detail about it. What happened, happened, and that’s it.”

Although Stroll’s three spins so far this week - with one on Tuesday and two on Wednesday - have put him in the spotlight, Smedley said it would be wrong to criticise the rookie – as he blamed the final incident on tyre characteristics.

“I think both drivers have talked a lot about these tyres," continued Smedley. "They are good to lean on them, but there is a certain point where they become very tricky.

“Lance was out on cold tyres, on a cold medium tyre, on an out lap with a lot of fuel in the car, and the tyre stepped away from him.

“He was an innocent victim of that happening and what should have been an innocuous sideways moment brought him around into the barrier and did some damage. That happens and we expect it to happen there is no blame on his part.”

He added: “He shouldn’t feel he has let the team down, otherwise we are living in some kind of terrible blame culture. And we don’t want that.

“I wouldn’t even call it a mistake that Lance made today. He was going for an upshift, he was on cold tyres. There is no blame to apportion here at all, the main focus as usual is how did it happen, how do we stop it happening again and how do we contain the actions going forward.”

Stroll unfortunate to join F1 in "the toughest year" - Hamilton