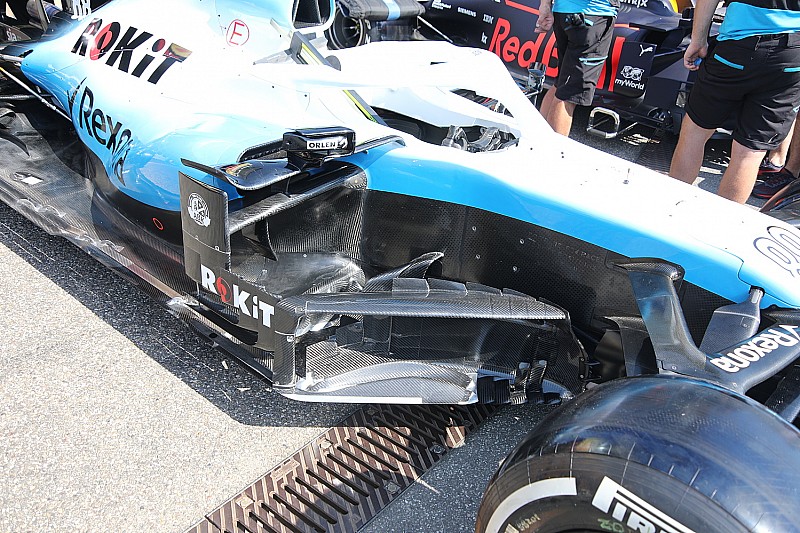 Claire Williams hopes that the "extraordinary" effort that the team has made to deliver its latest upgrade at the German Grand Prix can help lift her squad into a fight with the cars ahead.

After some encouraging progress with improving the balance and stability of the 2019 Williams over recent races, the team has focused on aerodynamic performance for Hockenheim in a bid to deliver more downforce.

Deputy team principal Williams was full of praise for the work that her staff had done to deliver the changes this weekend.

"A considerable amount has been done back at the factory, not just in aero, to develop the parts," she said.

"The design office as well to get them drawn up, and the amount of work that has gone in in manufacturing off the back of what has been a very hard year for that group especially, has really been quite extraordinary."

Robert Kubica will trial the updates in Friday free practice, with both cars then set to be fitted with them from the start of Saturday.

George Russell said he was optimistic that the progress of the car would show on the timesheets.

"Hopefully this weekend will be the first time we've seen a small step forwards," he said. "How much that will be we're not quite sure yet. But we'll definitely have some visible changes to the car this weekend.

"It will definitely be a step forwards but I'm quite sure we'll be slowest still."

Williams said that there was some optimism about the progress the team is making though, and hopes that the German GP development parts will help 'propel' the outfit closer to the pack in front

"From the start of the season, the gap to P9 was 1.5 seconds and that is a huge amount to have to close down in the course of one season," she said. "A lot of teams wouldn't find 1.5s over the course of one year, so at the start it was about not seeing that gap get any bigger and seeing some small gains.

"I am pleased that we have made perhaps bigger gains that we ever anticipated we could. We have to wait and see what this new performance brings us, and we could be sat here tomorrow night going 'oops', but I hope that is not the case.

"After that, will we be able to judge what we can do for the balance of the year, but I hope it does make us, or propels us, back in to fight, because the drivers want to be fighting the other teams.

"We have had a few scraps this year in the last few races with the Haas, but we want to be in the mix in the midfield and that is the work going on this year. But it is no mean feat trying to find two seconds of performance."

After a rocky opening to the start of 2019, Williams has finally been able to start putting upgrades on its FW42 in its pursuit of closing the gap to the rest of the field.

In Silverstone, the team had reshuffled its turning vanes, breaking the bridge between the vertical and horizontal sections to change up how the airflow washes down the sidepods.

The team has now added a significant further step to its aerodynamic package for Hockenheim, completely overhauling the bargeboards in search of further gains.

The top edge now features a number of serrations to actively draw airflow from the suspension components and sending it around the sidepod.

This is augmented with an in-vogue ‘boomerang’, which provides more options in managing the airflow coming off of the front wheels.

A new floor has also been added to the car, featuring longitudinal slots along the edge which make their way to the very rear corner, replacing the diagonal cuts to give the airflow a stronger opportunity to wash outwards.