Williams is bracing itself for an up-and-down season after electing for a peaky aero platform on its Formula 1 car that could leave it exposed when the wind picks up.

The Grove-based outfit believes that going down such a route with its FW43B will pay off handsomely in the right conditions and allow its drivers George Russell and Nicholas Latifi to shine on the calmer days to pick up constructors' championship points.

Speaking about the decision, Russell says that Williams' hopes of moving up the standings will be best served by the occasional points haul on days when things go right, rather than having a more consistent platform.

"We've opted to go down a bit of a route to give more downforce at the expense of being a bit more sensitive," explained the Briton.

"Ultimately, we recognised that we only need a couple of [good outings], and if we were consistently at a set pace, as we probably were last year, we consistently won't be scoring points.

"You've only got to be quick at two races, for example, and you will finish potentially eighth or ninth in the constructors' championship. Haas scored three points last year and Alfa scored eight. We want to try to be as quick as possible when the stars almost align."

Russell said that the aero characteristics of the car, and in particular its wind sensitivity, were what hurt the team over the gusty Bahrain test weekend.

"We knew ahead of this season and confirmed in these days that our car was incredibly sensitive to the wind and the conditions of these past three days have probably brought out the worst of the car, which has been positive in ways to analyse," he added.

"But, equally, I think you'll see us, our performance, as a bit of a yo-yo this season. And unfortunately quite often in the hands of the wind." 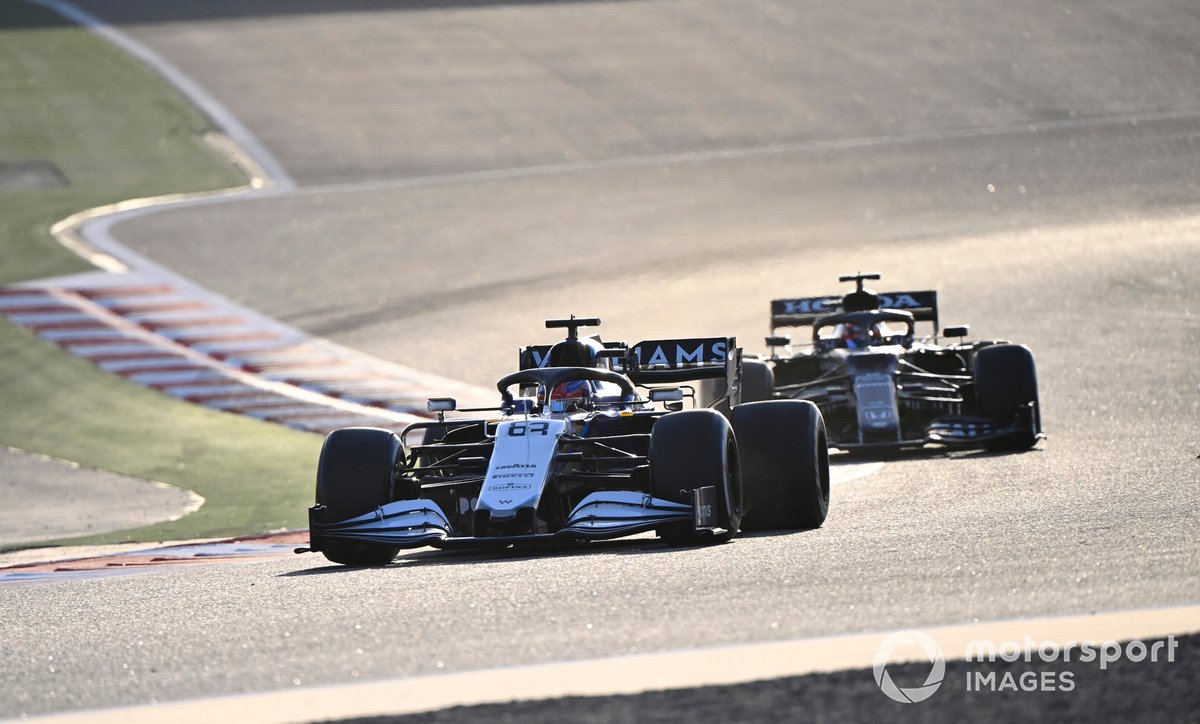 George Russell, Williams FW43B ahead of Yuki Tsunoda, AlphaTauri AT02

While the Bahrain test was a bit of a struggle at times, Russell says he takes heart from the performance of the car when occasionally the conditions were more settled.

"When the wind is in a favourable direction, the car is very fast," he said. "These days have brought out the worst of the car, but there has been positives because when there were corners that were normal, our car was actually very competitive.

"I trust that when we go to a track when everything's a bit calmer or a bit more enclosed, that's where we can excel. I think, maybe, Imola could be a good one for us."

While the aero concept choice means there will be a great deal of variation in Williams' form in 2021, Russell has faith the tactic will pay off over the course of the full campaign.

"This wind sensitivity, it's not the first time a team or car has had it," he said. "For us maybe it's a bit more extreme than it has been the last two seasons, but equally we could be sitting here at the end of the season, and saying, you know, we were very, very quick in 10 races, very, very slow in the remaining 13.

"But we managed to score points in those races that worked well, and we managed to come home eighth in the championship: therefore, that was a great decision to go down that route. So there's pros and cons to every philosophy. Time will tell."

F1 cars will be just as quick as last year, says Pirelli

The trackside verdict on F1 2021 testing