Feb.28 (GMM) Sir Frank Williams has admitted it was a mistake to let F1's most respected engineer Adrian Newey leave his beleaguered team more than a decade ago. 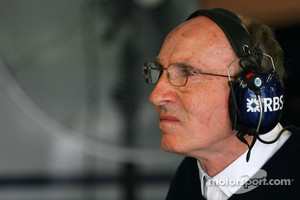 Aerodynamic specialist and Briton Newey, who has since built championship-winning cars for McLaren and Red Bull, left Williams in 1997 -- the year Jacques Villeneuve won the Grove based team's last title.

Williams, a woeful ninth in the constructors' standings last year, has not won a race since 2004.

"He (Newey) wanted some shares that I didn't want to give to him at the time," Williams told F1 Racing magazine. "(That) was arguably, with hindsight, a mistake.

Wheelchair-bound Williams, 69, also admitted that last year's Cosworth-powered car was not good enough, triggering a restructuring of the famous team and a switch to Renault engines.

"It (the FW33) was deficient in most of the areas that matter, but we were completely lacking in the most important one of all, which is aero," he said.

"And probably a bit of horsepower. It just wasn't a quick car."

But Williams admitted that there is one element his team will continue to lack in 2012.

"There's only one of him," he said, referring to Newey.

"Adrian is quite a remarkable individual."

Marussia forced out of final test after crash test failure

What is behind McLaren's latest F1 upgrades