The Malaysian Grand Prix went out in style with an entertaining race featuring a win for Red Bull’s Max Verstappen and championship contender Seb...

The Malaysian Grand Prix went out in style with an entertaining race featuring a win for Red Bull’s Max Verstappen and championship contender Sebastian Vettel charging through the field from the back of the grid after a power unit problem in qualifying.

Strategy wise, this was a one stop race, but there were some very interesting game plays at work in a competitive midfield. Even more interestingly, Mercedes showed its hand on how Valtteri Bottas will be deployed as a number two driver to help Lewis Hamilton’s quest for the drivers’ crown.

He was used in that role here in Malaysia to block Vettel at the cost of his own finishing position, as we shall see.

Ferrari had the pace to win the race, but neither Vettel nor Raikkonen could capitalise as the Finn failed to start, also due to power unit issues.

The Sepang track was resurfaced for last year’s race and was smoother than for this year’s race, which affected calculations on tyre performance and also fuel consumption for the race. Friday practice did not give good information as the session had to be stopped due to an incident, so the long runs were truncated and inconclusive.

From the evidence available pre-race, the long run pace of Vettel and Raikkonen was closely matched, with the Red Bulls a step behind and Mercedes clearly struggling with overheating the supersoft tyres.

On softs Mercedes were a bit stronger, but still slow. Vettel was again the pace setter but Verstappen matched him in the Red Bull. So the indicators were there for a strong weekend for Verstappen.

Vettel on the charge, runs into trouble at the end – but not just with tyres

Vettel had a very strong race from the back of the grid. He started on the soft tyres, which was what everyone expected. Most strategists had modelled his race and had him finishing fourth, catching Ricciardo at the end. Whether he would be able to pass him was a moot point. His supersoft tyres against Ricciardo’s softs would give him around 0.8s advantage and the Ferrari had a few tenths in it as well.

As the race transpired, Vettel had some luck; the midfield runners cleared out of his way as he caught them by pitting to cover each other, giving him a clear pathway through. He did catch Ricciardo and had one major lunge at trying to pass.

But by that stage he had two things against him.

The first was that his stop lap was not ideal, due to Mercedes tactic of leaving Bottas out to block him. As Vettel caught the Finn for 4th place around lap 22, we were getting close to the pit stop window for the leaders who had started on supersofts. Ideally Vettel would want to stay out on his softs for a few laps more to pit into clear air and attack on the new supersofts at the end. This strategy works very well sometimes if there is a late Safety Car as it bunches up the field and the driver on the supersofts can attack the others at the restart.

Had there been a late Safety Car Vettel could have won the race.

Instead he had Bottas to contend with. Mercedes used Bottas to keep Hamilton out of reach; they pitted Hamilton on Lap 26 and got him out safely ahead.

Now if they were racing normally for position against Vettel they would have pitted the Finn and used the new soft tyre pace to hold position once Vettel stopped. Vettel would then have been forced to pass him on supersofts, which he probably would have done anyway as Bottas was 8/10ths off the pace.

But the reality was that, with the constructors’ title in the bag more or less, Mercedes’ focus is now on the Drivers’ Championship.

And so they left Bottas out there as long as it took before Vettel stopped on Lap 27 and undercut him. The undercut was inevitable, but what this tactic did was oblige Vettel to stop a few laps earlier than the optimum, giving him a longer than ideal final stint on the supersofts.

The other problem Vettel had when he caught Ricciardo is that he was running out of fuel. The teams have means of tracking what their competitors are doing and the other teams report that Vettel was having to lift and coast for up to 60 metres into some corners.

Ferrari had gone aggressive on the fuel load, but perhaps there was a slight miscalculation on the grip level and therefore the fuel consumption. Team radio messages also reveal the team asking Vettel to give them more fuel back via the lift-and-coast technique.

He also had some obstruction from Fernando Alonso which cost him time.

So he wasn’t able to mount the challenge on Ricciardo he had hoped for and finished fourth.

Ocon and the risks of tangles in one stop races

It was another terrific battle for positions in the midfield, with very strong work from Sergio Perez and his Force India team to turn a strong start – from 9th on the grid up to 6th on Lap 1 - into a 6th place finish. The same was true of Stoffel Vandoorne and McLaren who started seventh and finished seventh, having run as high as fifth in the opening laps, before Perez passed him.

Esteban Ocon started sixth but made contact with Felipe Massa in the opening corners and got a puncture. He was forced to pit on Lap two and from then on he was up against it. If you have a tangle in a multi-stop race there are things you can do to recover, but in a one stop race you are in trouble, unless you luck into a Safety Car.

It was impressive that he made a set of soft tyres last for 54 laps to the finish, but he should have been with Perez and Vandoorne.

Hulkenberg stopped on Lap 9, which was very early and he duly ran out of tyres before the end, needing to stop again, dropping from 11th to 16th.

There was a strange moment at Williams where Massa was pitted first, rather than Stroll who was ahead of him. This was because Massa was under greater threat from behind, but the net effect was to undercut Stroll on the fresh tyres, when the Canadian pitted a lap later.

As this had not been done for any underhand or political reasons, the team rectified its error and asked Massa to give the place back, which he duly did. The pair finished 8th and 9th.

How did that undercut happen? Track evolution dominates the early part of a Grand Prix and the teams are frantically modelling it for their decision-making around pitstops and tyre choice. It can be hard to see the undercut value sometimes and it’s a mixture of experience, data and even a bit of luck. Williams got it wrong this time.

Spare a thought for the Sauber engineering team after their network went down taking all the timing with it. They were having to work with stopwatches, TV pictures and a lap chart – the old fashioned way!

The UBS Race Strategy Report is written by James Allen with input and data from several of the leading F1 teams’ strategists and from Pirelli.

Look at the tell-tale droop on Vettel's race trace (solid red) which shows how he had to back off at the end due to lack of fuel. Also note the period in the mid 20s when Vettel is held by Bottas allowing Hamilton to pit and retain position. Compare the way Hulkenberg's tyres drop off a cliff after a very long second stint, compared with Ocon, who manages to keep them going to the end to salvage a point. 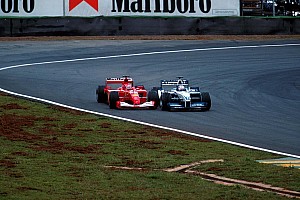