Formula 1 returns to Paul Ricard this weekend after an absence of 28 years, a period in which the sport’s technology and sophistication have been revolutionised.

But while today’s generation of cars are a world away from those that took the grid at the 1990 French Grand Prix, some of what were then radical ideas used in the Ferrari and Leyton House that fought for victory have become standard nowadays.

The two cars were totally different in concept, and featured elements in their design that opened up new avenues for F1 teams – and have quickly become accepted practice.

The Ferrari of Alain Prost was based on the 1989 John Barnard 639, which was a milestone in terms of the technical history of F1 cars.

Not only did the car have a semi-automatic gearbox, but it also had completely different aerodynamics. It also featured front and rear torsion bars instead of springs, something which soon set a trend and now all cars have this solution.

The Leyton House driven by Ivan Capelli was based on the Adrian Newey 1988 March, which was an extreme car from the aerodynamic point of view.

In fact, things were so extreme that the contours of the chassis were built around the shape of the drivers’ feet. It was really the start of the move F1 has made towards incredibly complicated aerodynamics.

The Ferrari and the Leyton House also had a completely different philosophy in terms of building the chassis.

With the Ferrari, the carbon fibre chassis was separate from the bodywork, which was attached. The Leyton House was part of a new generation of thinking, where the chassis made up also the bodywork as it does with the current cars.

These two cars then, although being very different and both being cutting edge, have elements that remain important to F1 today.

Here, along with Gary Anderson, we look in more detail about the specific elements of the two cars. 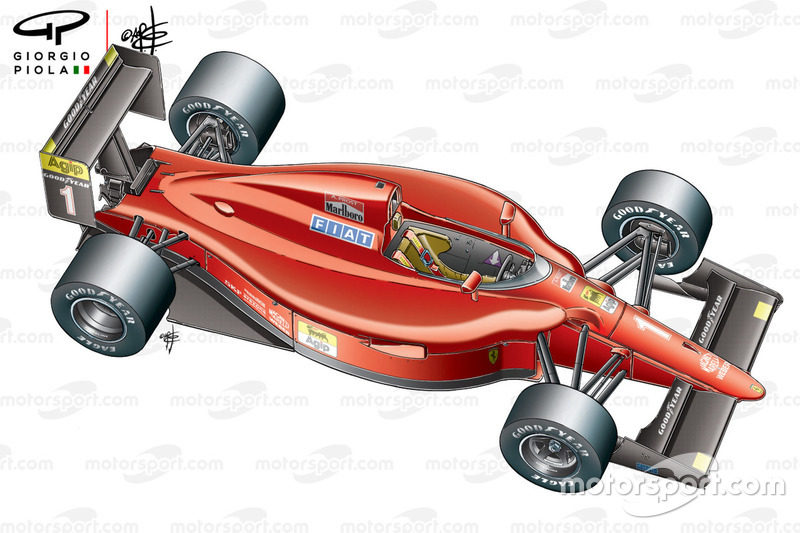 The race was won by Prost after passing Capelli late on when the Italian suffered a brief drop in fuel pressure. What is striking is the growing complexity of the aerodynamics that makes it so difficult for cars to overtake.

The Ferrari 641 was a John Barnard-designed car, with Henri Durand leading the aerodynamics team, and shows how much things have moved on. 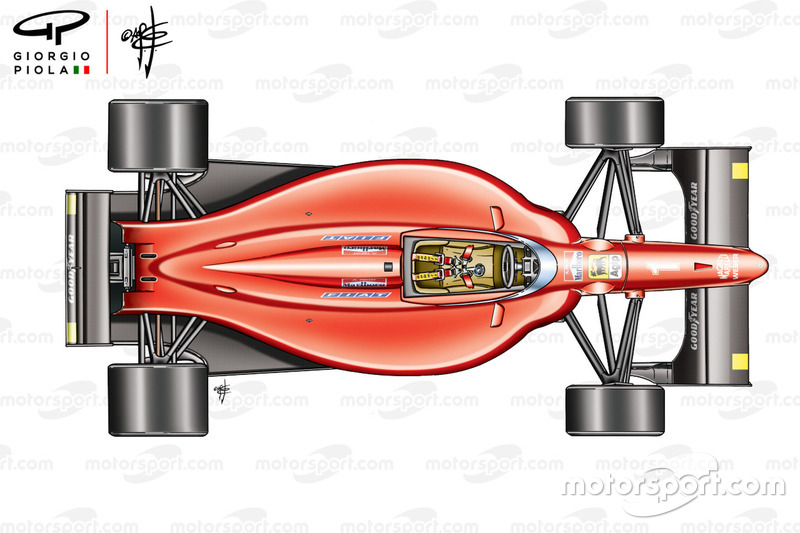 The sidepods are long and sleek, whereas currently the design objective is to get them as short as possible to allow more room for the multiple twisted turning vanes that are now called bargeboards.

The undercut sidepods hadn't come in at the time, so the trend was for tall and narrow radiator inlets. 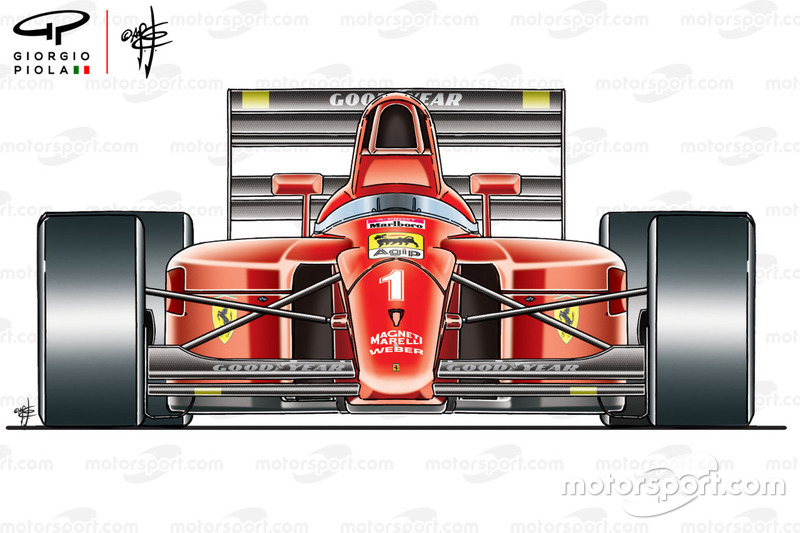 The front wing is minimal, with just two elements, and the diffuser in those days was much more powerful.

The current cars produce something like 1600kg of downforce at 240km/h, and the Jordan we raced in 1991 had about half of that – although we weren't a Ferrari beater and were happy to get one over on the big teams if they had a bad day that year.

The underbody layout of the cars are fairly similar. From the front, you have the chassis, fuel tank, engine and gearbox but now the underbody detail is so much more refined.

Williams had qualified just beside us and we were having a difficult time, so you can imagine how bad it was for Williams.

But he was right, now the underbody aerodynamics are as important as what the outside body surfaces look like. That was in 1998 and huge strides have been made since then. 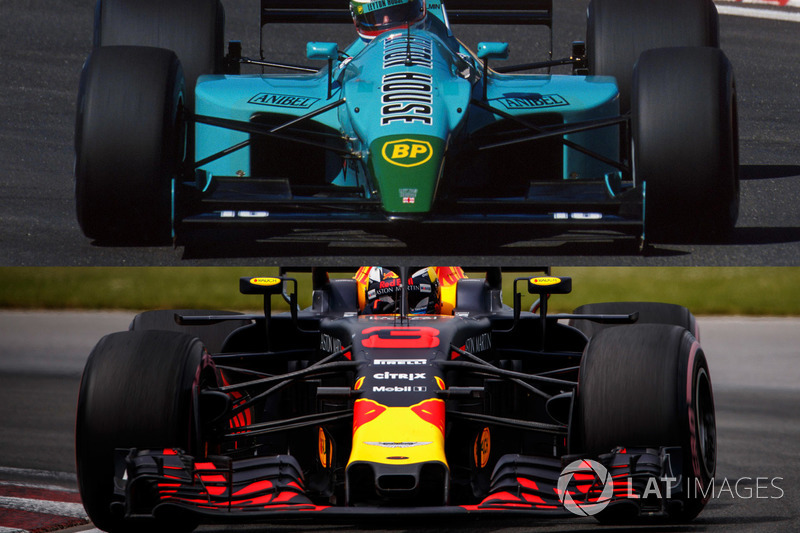 It's also interesting comparing the front wing to what we now see on the Red Bull, very different but I think you can see it comes from the same family. 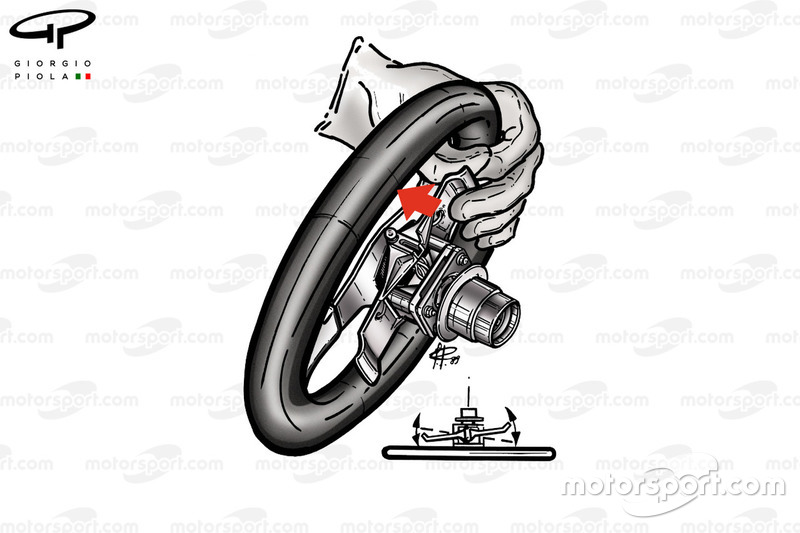 Ferrari was the first team to introduce the paddleshift gear shift system, which was introduced on 1989's Ferrari 640 and then used on the 641.

It was a Barnard creation and Ferrari started testing it during the second half of 1988. My F3000 driver at Bromley Motorsport, Roberto Moreno, was hired to do the test work and the system then was quite different to what is used today.

Ferrari took more or less a normal gearbox with three selector rods and fitted electrical solenoids at the end of the selector rods.

The paddles would simply energise the solenoid and move it one way or the other, so the paddle was more of a see-saw so you could push or pull it.

Now, the gearshift is more like a motorcycle with a barrel gear change system.

One actuator basically rotates the barrel a certain number of degrees so it goes from one gear to another.

With the current zero-torque loss system (seamless shift) it is a little more complicated than that but then so is everything else.

That's because the teams now have at least ten fold more in man power. In 1991 we had about 30 people at Jordan now there are in excess of 300 of Force India while Ferrari probably had 100 people in 1990.

It was 1993 before we, at Jordan, entered into the world of the paddle shift system and like everyone else it wasn't without its problems, but by the end of the season we had more or less got on top of it.

When the paddle shift was working correctly, it was a lot easier on the driver, who didn't have to take their hands off the steering wheel and it reduced the risk of a missed gear blowing up the engine.

So it was a good thing, but it also means there is zero chance of missing a gear change so it takes away the potential for that little driver error which in the past has led to so many overtaking manoeuvres. 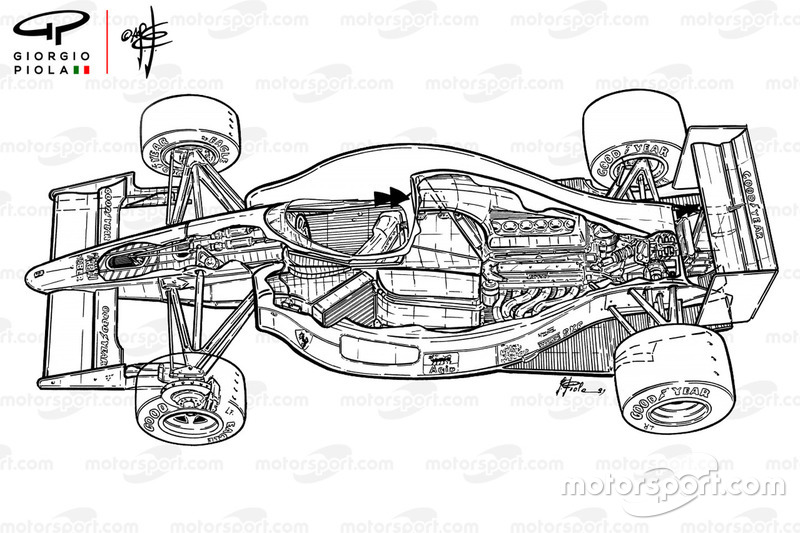 This cutaway of the Ferrari 641 shows in more detail the car in its second iteration, which was introduced for the San Marino Grand Prix at Imola.

The nose had a sharper point, with a shorter panel covering the top of the nose.

The upper lip of the cooling air intake had a more rounded shape above the lower part of the intake, while the radiators were taller.

There was also a new lateral outlet and larger fuel-system air intakes.

Ferrari also modified the pick-up points for the rear suspension and introduced a new undertray. 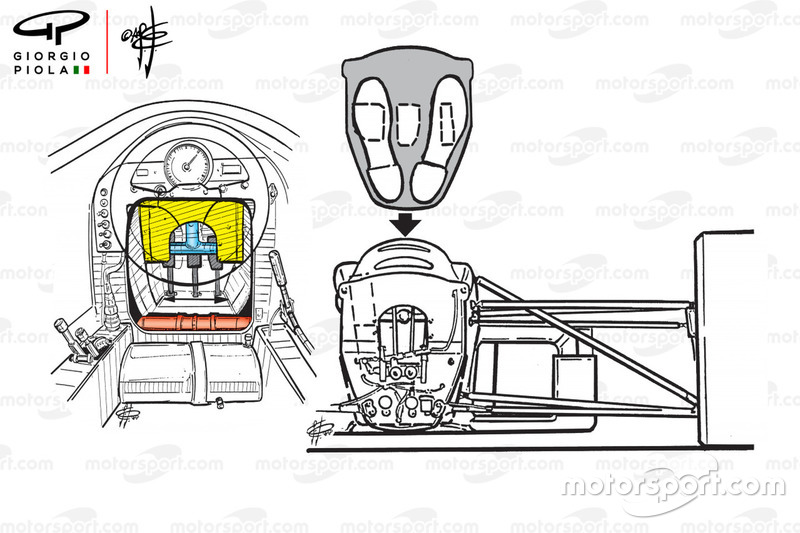 Newey's famously aggressive packaging meant that the confines of the Leyton House cockpit were very tight.

This shows the design of the March 881, used by the team in 1988 before its name changed, and things were very similar for the 1990 car.

"It was small," says Capelli of the 1988 car. "The steering wheel was just 25cm across and the whole bulkhead that you had to put your legs through was 25cm.

"With three pedals, it was so tight that there was no footrest, which was a real problem in some corners.

"The first time I drove, I couldn't reach the gear lever because it was too far back.

"Adrian said 'wait there', took the gear lever out and I could hear hammering at the back of the garage.

"He came back with the lever bent forward."

Formula 1: Vettel to settle at Aston Martin for 2022