OPINION: With Hungary implementing laws banning the teachings of LGBTQ+ issues to under-18s, the country has come under fire for its domestic policy. In response, both Lewis Hamilton and Sebastian Vettel arrived in Hungary displaying their support for the LGBTQ+ community. Luke Smith explains why it matters.

If the past 18 months have taught us anything, it is that sports and social issues absolutely do mix.

“Stick to sports” has been a retort wrongly aimed at those eager to use their platform to speak out about important matters that impact all of society.

We saw this no clearer than during last year’s activism around the world in the wake of the murder of George Floyd, as sporting stars around the world joined the call for long overdue change to make society more equal, more tolerant and more inclusive.

Seven-time Formula 1 world champion Lewis Hamilton was at the forefront of that in the world of motorsport. He has continued to work hard on enacting change, with the findings of The Hamilton Commission showing just how much work there is for our industry to do to improve black representation.

And on Thursday, Hamilton again stood tall, along with Sebastian Vettel, as both spoke out about Hungary’s upcoming referendum on an anti-LGBTQ+ law ahead of the grand prix in Budapest this weekend.

Hungary implemented the law last month preventing the depiction and teaching of homosexuality or transgender issues to under 18s, sparking widespread condemnation across Europe.

The EU has already commenced legal action against Hungary, with a majority of its member state governments condemning the law as a “flagrant form of discrimination based on sexual orientation, gender identity and expression”. Hungarian ministers have insisted it is not an EU matter as it relates to domestic policy, and is a democratic matter for its people to vote on.

The matter has already been highlighted in other sports, most notably during the EURO 2020 football tournament. Ahead of Hungary’s game against Germany in Munich, officials wanted to light the stadium up in rainbow colours, only for UEFA to block the move, again sparking criticism from fans.

Hamilton has spoken up about such issues in the past, previously posting about LGBT rights on his Instagram. But his direct message ahead of the Hungarian Grand Prix was the most vocal he has been yet. 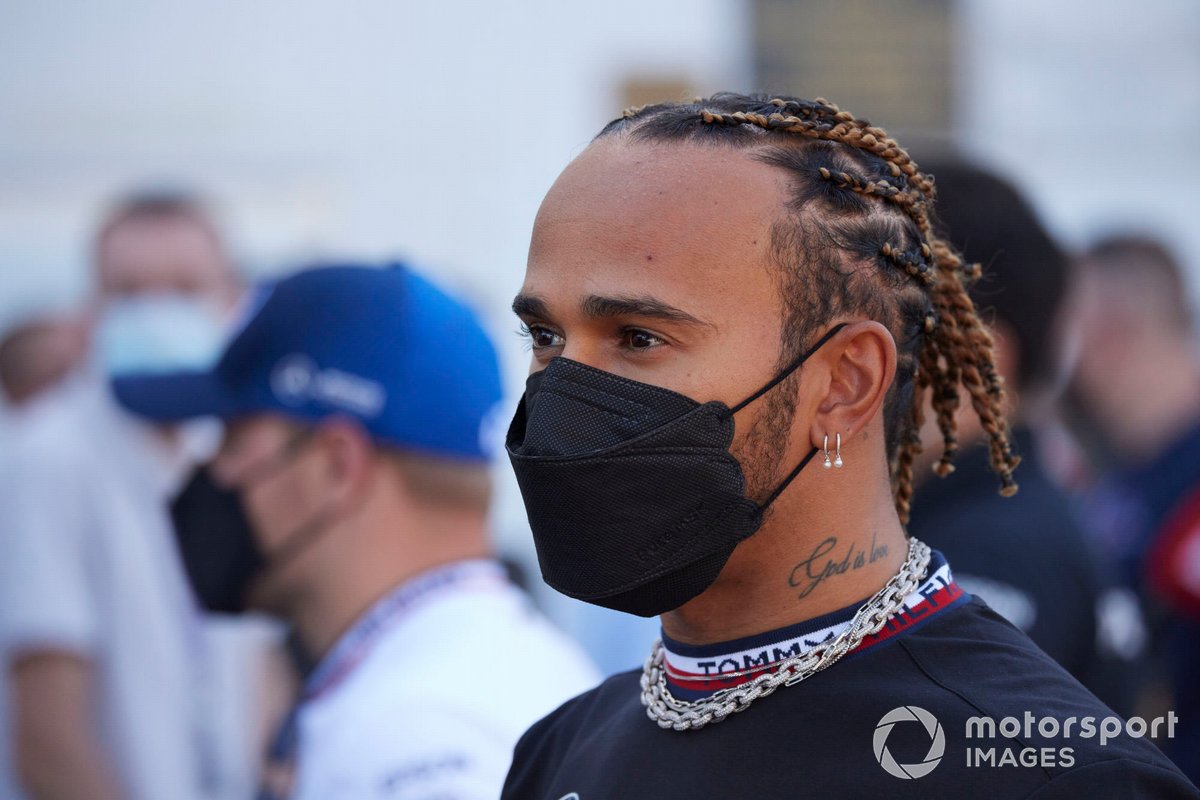 “To all in this beautiful country Hungary,” Hamilton wrote. “Ahead of the grand prix this weekend, I want to share my support for those affected by the government’s anti-LGBTQ+ law.

“It is unacceptable, cowardly and misguiding for those in power to suggest such a law. Everyone deserves to have the freedom to be themselves, no matter who they love or how they identify.

“I urge the people of Hungary to vote in the upcoming referendum to protect the rights of the LGBTQ+ community, they need our support more than ever. Please show love for those around you because love will always win.”

Hamilton was not alone in speaking up. Aston Martin driver Vettel was spotted in the paddock wearing trainers that had a pride rainbow flag on the side and soles, and spoke eloquently about the matter when asked about them by Motorsport.com.

“Everyone is free to do what they want, and exactly that I guess is the point,” Vettel said. “I find it embarrassing for a country who is in the European Union having to vote, having some laws like this as part of their [legislation].

“I just think we’ve had so many opportunities to learn in the past, and I can’t understand why you are struggling to see that everybody should be free to do what they like, love who they like. It’s along the lines of live and let live.

“So it’s obviously not for us to make the law, and that’s not our role. But I think just to express the support for those who are affected by it [is].”

This point from Vettel hits the nail on the head of why visible figures speaking out is so important. Using their platforms, they are able to lend support to groups facing discrimination such as that facing the LGBTQ+ community in Hungary under this law. 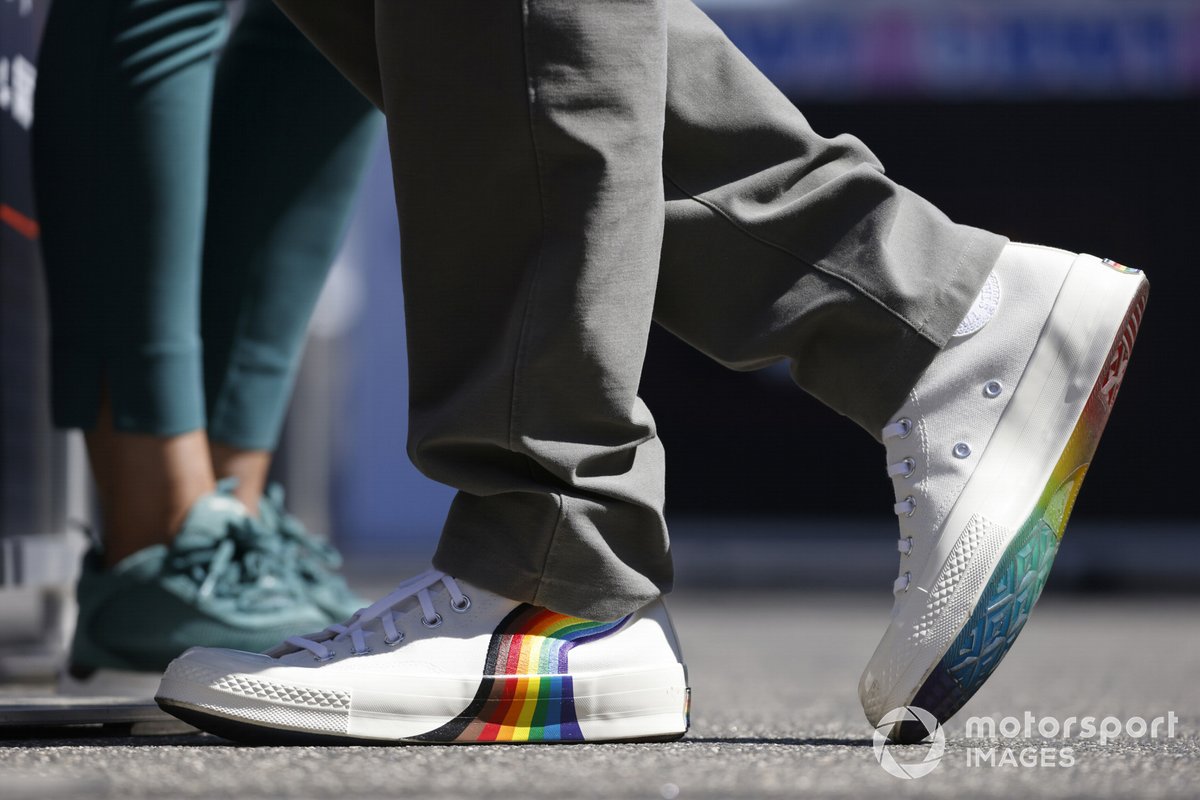 The response to Hamilton and Vettel’s comments on social media was in places - sadly, yet predictably - awful, with those hiding behind avatars of footballers or cartoon frogs using the anonymity these platforms offer to hit back.

“You’re asking this in a limited time Formula 1 press conference,” read one tweet sent to this writer. “What an embarrassment. Show some respect to the Hungarian government and public for starters. Try focusing on F1 in F1 press conferences too.”

But the moment we condense ourselves into our realms, the moment we “stick to F1” and disregard any issue on the outside world, then the series loses all relevance. And it also impacts those within affected communities who are fans of our sport.

One of the most heartening replies to Hamilton’s post was: “As a queer woman, I wish I had the words to describe how much him standing up for LGBTQ+ people in this way means.” That is why it matters.

We cannot turn a blind eye to important issues such as this, particularly when it is at the forefront of public discourse as this is at the moment. We cannot pretend F1 exists in a world where the only thing that exists is racing.

It is something many in the F1 paddock are conscious to, with a number of people sporting rainbow wristbands this weekend to show their support and solidarity. Sarah Moore - the first openly LGBT person to stand on a podium at a grand prix weekend - will be running with a rainbow logo on her car and helmet in the W Series sessions.

This stand for rights - not politics, basic human rights - goes far beyond Hungary. Human rights is an important matter that F1 has been increasingly conscious of, and will inevitably come into the spotlight later this year when it races in Saudi Arabia. Again, it is likely to be Hamilton and Vettel who are the figures to speak up the most - as Hamilton already has in Bahrain - in a bid to help encourage change and lend support to those facing discrimination and persecution.

We are very, very lucky to have such vocal and visible figures in F1, willing to speak up when it matters. Long may that continue.