Why the FIA is unmoved over Austria F1 penalty criticism

Formula 1 fans have been divided in opinion over whether the penalties handed out to Lando Norris and Sergio Perez at the Austrian Grand Prix were justified or not.

In an era when the sport has tried to encourage a ‘let them race’ mentality, the sanction given to Norris in particular prompted the biggest debate of all.

With the McLaren driver having not made any contact with Perez, and the duel being not much different to similar incidents that escaped sanction in the past, it was no surprise that many were unhappy with the FIA’s heavy-handed ruling.

Perez had clearly put himself in a risky spot by trying to go around the outside of the Turn 4 corner, especially knowing that the gravel trap on the outside has a habit of sucking cars in to it if they run slightly wide.

But F1 race director Michael Masi says the governing body is unmoved by the criticisms, and says that all three incidents – with Perez later involved in similar clashes with Charles Leclerc – were judged on the same criteria.

For him, the key factor is that the driver on the inside – Norris in the first incident and Perez later on – had not left a mandatory car width on the outside on the exit of the corner as he should have done because their rival had been fully alongside.

“In the first case, in Sergio's one with Lando, he was wholly alongside Lando,” explained Masi. “And therefore there is an onus to leave a car's width to the edge of the track.

“Obviously I don't sit in the stewards room to deliberate, but their view was in all three circumstances, a car's width should have been left to the edge of the track because the two cars were alongside each other."

Another factor that likely came into play here also was that the outside of both Turn 4 and Turn 6 at the Red Bull feature gravel rather than asphalt run-offs.

So any incidents of drivers being forced wide have much bigger consequences than if there is asphalt run offs where drivers lose little if they go wide and are then able to resume fighting soon after.

Asked if incidents involving gravel are treated differently, Masi said: "Obviously, gravel does have an impact in those places. So you know, yes, you would say looking at it logically.

“Each of those you have to look at on their merits, characteristics of the circuit, etc."

The Norris incident is not the first time this season that cars on the outside have been pushed wide – with title rival Lewis Hamilton having been edged out at the first corner of the Emilia Romagna Grand Prix by Max Verstappen in a move that was deemed acceptable.

But Masi says it is very hard to compare different incidents as there are often not identical circumstances.

Reflecting on why the Imola scenario was not comparable, he said that the first lap of the race is often not treated so harshly.

"First corner, lap one, and you have to remember this from a team's perspective as well, that all lap one incidents are treated in a more lenient manner,” he said. “And that has been the case for a number of years under the let them race principles, let's call it. 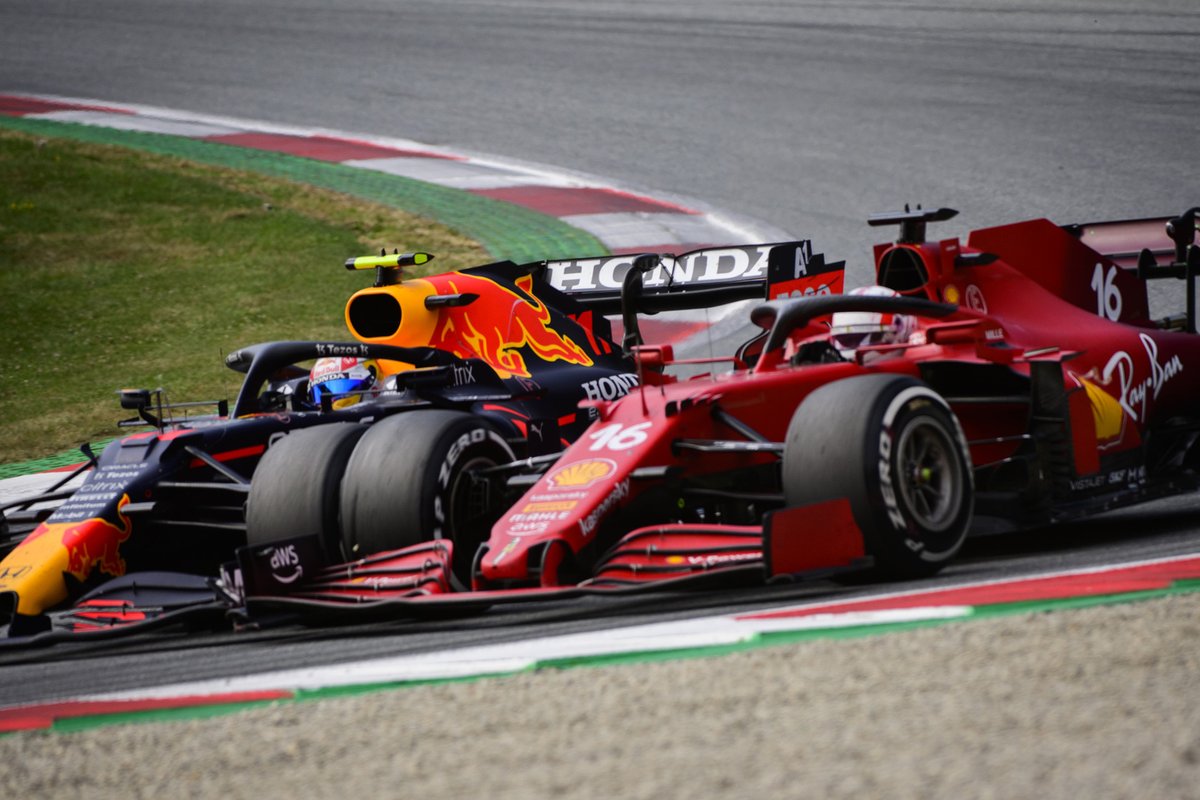 The penalties at the Red Bull Ring also prompted recollections of the way that Verstappen triumphed in 2019 despite forcing Leclerc wide at the exit of Turn 3 on the penultimate lap of the race.

Back then, the move has given the all clear by the FIA and hailed as part of a new philosophy to get the drivers battling hard.

Asked about whether the treatment of the 2019 incident and the dishing out of penalties this time around showed a lacked of consistency, Leclerc wasn’t so sure.

“I think this one is probably a little bit different, because you can argue that two years ago, I was not in front at the apex, or we were very close, at least,” said Leclerc. “But this year I was definitely in front at the apex, so he [Perez] had to leave a space on the exit. But I think he knows he overstepped it a little bit. We spoke with Checo, he apologised straight away after the race and it's fine, I'm the type of guy that is not staying on it for so long. So, the air is clear, and I'll go forward.

“But I feel like this one was obviously a little bit different. The consequences were bigger for me, there was gravel and not tarmac, and I was also in front at the apex around the outside, so you need to leave space.”

Shovlin: Mercedes F1 became ‘makers of our own issues’ in Austria