Ferrari’s strategy calls may have come under fire at times this Formula 1 season, but team boss Mattia Binotto is far from downbeat about the situation.

In fact, he is robust in the defence of his strategy department and, while accepting there is always room for improvement, he is crystal clear that he has the right people in place in the right jobs.

It is a stance that may come as a surprise to some F1 fans, who have heavily criticised the team for what have appeared to be a series of critical errors this season that have cost championship hopeful Charles Leclerc dearly.

In Monaco, with Leclerc in the lead, it failed to respond in time to the extent the track was drying after Sergio Perez made the switch to slicks.

It then further compounded it with a badly timed second stop that allowed Leclerc to be jumped by Max Verstappen as well.

At the British Grand Prix, Ferrari's failure to pit Leclerc at the final safety car restart led to him falling from the lead to fourth by the end.

Then in Hungary, a hard tyre choice left the Monegasque powerless to defend against title rival Verstappen on a day when the real team problem was actually the lack of performance from the F1-75.

Added on top of this is the way that the strategy panned out for Carlos Sainz in France, when TV made it appear that Ferrari's strategists were confused and indecisive.

Binotto is open that Ferrari can do better and lessons have been taken on board, especially from Monaco, about the systems the team needs in place to make better informed calls on the pitwall.

However, he says that doing things better is a world away from believing that Ferrari has a fundamental problem with its strategy – because he says there are times when it has beaten rival Red Bull by doing a better job with its tyre calls in the race.

"I think there's always a way of improving ourselves," he said in an exclusive interview with Motorsport.com. "You cannot be perfect, and you will never be perfect. So no doubt, we need to improve ourselves on the aero, chassis, power unit, on strategy or whatever we can.

"But having said that, I think I have got a great team on the strategy, and I do not feel it's a weakness."

Binotto says it is important, when properly evaluating strategy calls, that they are not judged solely on how things turned out with hindsight.

Instead, what needs looking at is whether or not the right decision was made with the information that was available to the team on the pitwall at the time.

For in F1, there are often occasions when a decision looks wrong in hindsight but was completely correct at the time, especially because teams cannot judge how others respond to the decision they take.

Ferrari's call to keep Leclerc out during the British GP safety car is a case in point, as it mirrors the scenario that Mercedes and Lewis Hamilton faced at last year's Abu Dhabi Grand Prix.

Race leaders with the pack close behind often find themselves trapped in a Catch-22 scenario. If they pit, then those behind can stay out. That means they lose track position and then, if they don't recover, it looks like they sacrificed the lead for nothing. If they stay out, then those behind pit for fresh rubber. Then if they then lose out on the run to the flag, it looks like they made a mistake by not changing tyres.

The scenario for Hamilton in Abu Dhabi and Leclerc in Silverstone, and the choices both teams made in keeping their drivers out, were identical.

And for Binotto, ultimately, they were correct – even though on both occasions it cost the drivers the win.

Reflecting on the similar circumstances, Binotto explained: "I think that what was the right decision for Lewis, I think was maybe the right one still.

"From the outside, yes, Max won the championship. But Max would have always done the opposite. If he would have been ahead [had Hamilton stopped] then how would he have finished the race? We don't know.

"So if, in Silverstone, Charles would have come in, and Lewis stayed out with fresh tyres. How the race would have finished? I don't know.

"So even with hindsight, I don't know what the answer is. But, by the way, no one discusses and argue over their [Mercedes] decision at the time.

"Everybody believes that they can somehow argue what we decided at Silverstone."

Reflecting on the early season races, as he was talking before the Hungarian GP, Binotto said even post-race analysis of the decisions made had not highlighted blunders.

"While maybe you may see Monaco, Silverstone and Paul Ricard as issues, I don't see them as issues, because I think we made sometimes the right decisions," he explained.

"I'm not convinced right now that what we made was wrong. I am still convinced that we made what was the right decision at the time. Unlucky sometimes, but not wrong. 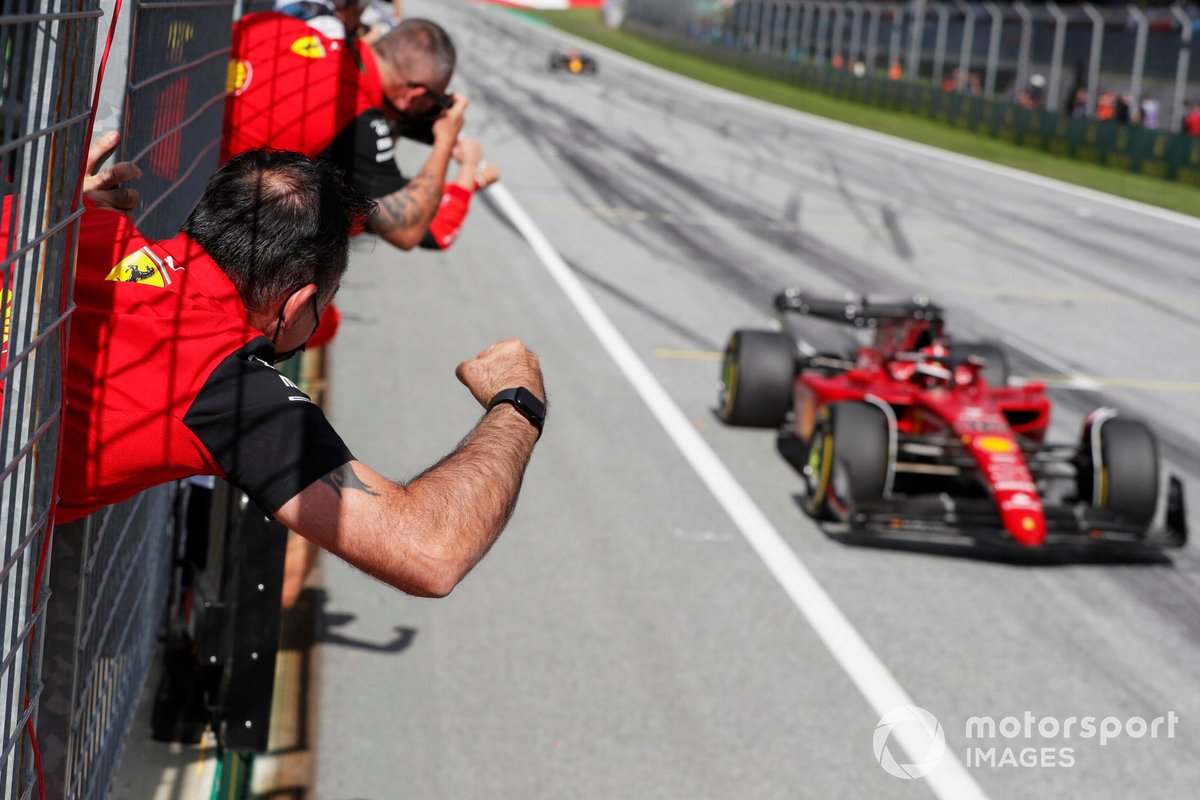 "And I think if you look at our strategy team, sometimes they are doing even great things, even greater than the others.

"We had the right strategy in Austria and the others not. We had probably the best strategy in France before the mistake of Charles.

"And I think that's showing: we have been brave enough in France to bring two mediums in the race when the others had hards. To do that you need to be not only strong, but brave.

"So overall, we've got a good team and I do not think that is a weakness to us."