The fallout of the closing laps of the Abu Dhabi completely overshadowed some important Formula 1 track action that took place on the Tuesday and Wednesday after the race.

The comparative times may have been meaningless given that mule cars of varying vintages were in use, but the Pirelli 18-inch tyre test was a key session for teams and drivers as they prepare for the new era in 2022.

All the teams taking part had already sampled the new tyres when they participated in Pirelli’s development testing earlier in the year. As time, the tyres being tried got closer to the final versions for those whose sessions were later in the year.

However, Abu Dhabi was the first time that all teams – bar Williams who opted out of making a mule car for budgetary reasons – were able to sample the definitive 2022 tyres, across the range of all five new compounds.

Pirelli hasn’t told us much about the earlier testing or how its new tyres were performing, but after Abu Dhabi the company’s F1 boss gave some interesting insights into what we can expect.

"They had available all the new range of compounds, and they used all the new compounds on many laps, short runs, long runs,” Isola explained.

“I have to say that in general, we found first of all the delta lap time between compounds in line with our tyre development tests.

"So I can say that this number is quite in line with our findings during the year, and during our tyre development tests. Clearly the C1 and C2 are not the best compounds for Abu Dhabi, it’s a low severity circuit where we use mainly the C3, C4 and C5.

“So in general, for C1 and C2, the comment was that the grip was low, but they were very, very consistent.”

One clear characteristic stood out: "I can say that the general comment from all the drivers was about understeer, it seems that our rear tyre is much stronger, it's pushing a lot the front. And the general feedback was on an understeer balance.

“Consider that using the mule cars the possibility to adjust the set-up was limited. So in some cases, even if the teams were working around the set-up of the car, the cars were still understeering, because of this strength of the rear tyre.”

Isola is confident that understeer will be less of an issue with the proper 2022 cars. 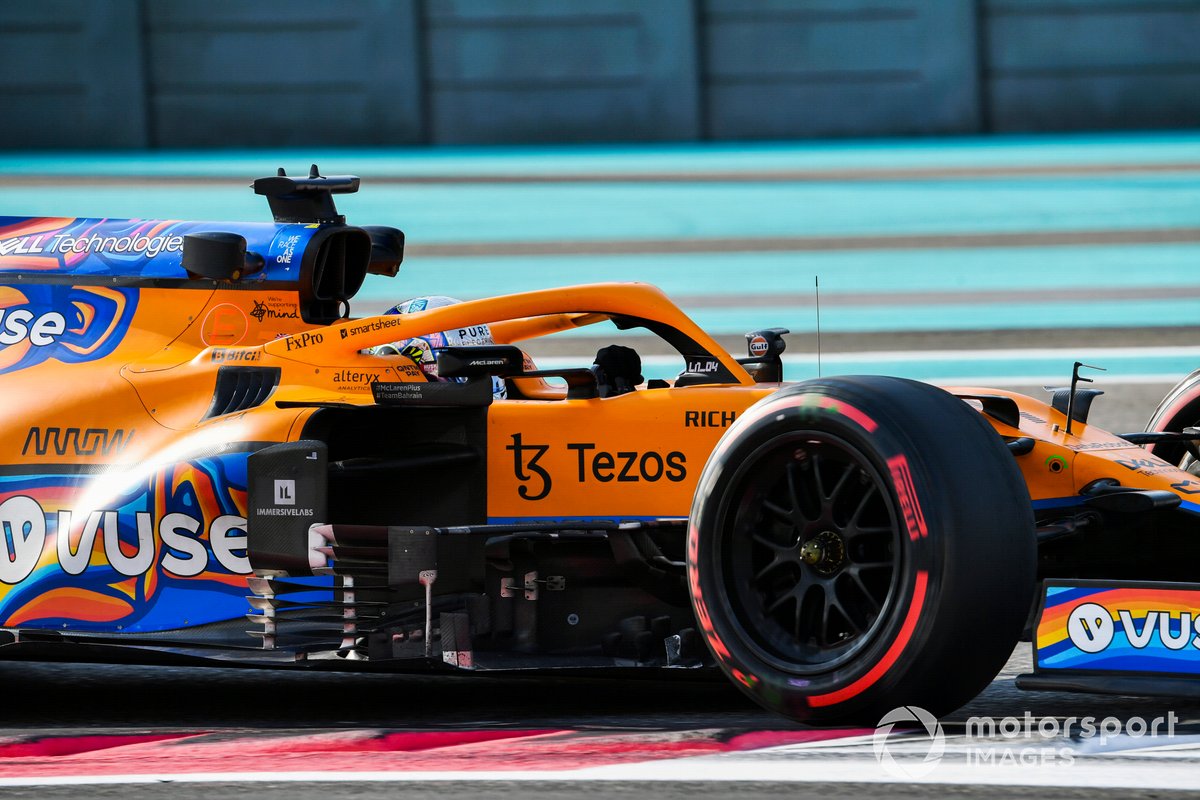 After the first day of the Abu Dhabi test Pirelli made a change to the parameters it had given the teams in attempt to dial out some of that understeer.

“Looking at the data that we got from the teams, we saw a margin in the pressure, especially in the front pressure,” said Isola.

“So we added the possibility to decrease the front pressure for today by 1.5 psi. That was useful to reduce the understeer, obviously giving more footprint on the front and reducing the graining, especially on the C3.

“We still have some abrasion and graining on the C4 and C5, but they are the softest compounds, so it makes sense. But with this reduction in pressure is C3 was working better.”

That front pressure drop was from 21.5 to 20.0 psi, while Isola confirmed that the rears stayed at a low 17.5 for the two days.

As a comparison for the race weekend the respective numbers were 23.0 front, and 21.0 rear. In other words, we will get used to seeing much lower starting pressures.

“We know that with the new sides, the 18-inches, the rear construction is in terms of integrity is more robust,” said Isola. “And this is why we have the possibility to drop the pressure to 17.5. That is quite low also compared to the 13-inches tyre.”

Aside from low starting pressures teams also have to get used to the lower blanket temperatures mandated for 2022, and which in turn impact how drivers warm up the tyres once they’re on track.

“That is the same temperature that we have used during our tyre development tests. The comments from drivers were on the C1, in some cases, they had to push quite a lot to get the temperature into the tyre. So that means a couple of laps to have the tyres ready. But we know that the C1 is not the tyre for Abu Dhabi.

“For the C2 it was a bit easier. And from C3, C4 and C5, they didn't complain about the warm up, they didn't have any issue on warm-up.

“This year we tried to design the new compounds with a wider working range, but without sacrificing too match the warm-up phase, because we knew that we wanted to go down with temperature in the blankets. So that is a confirmation of what we found during the tyre tests." 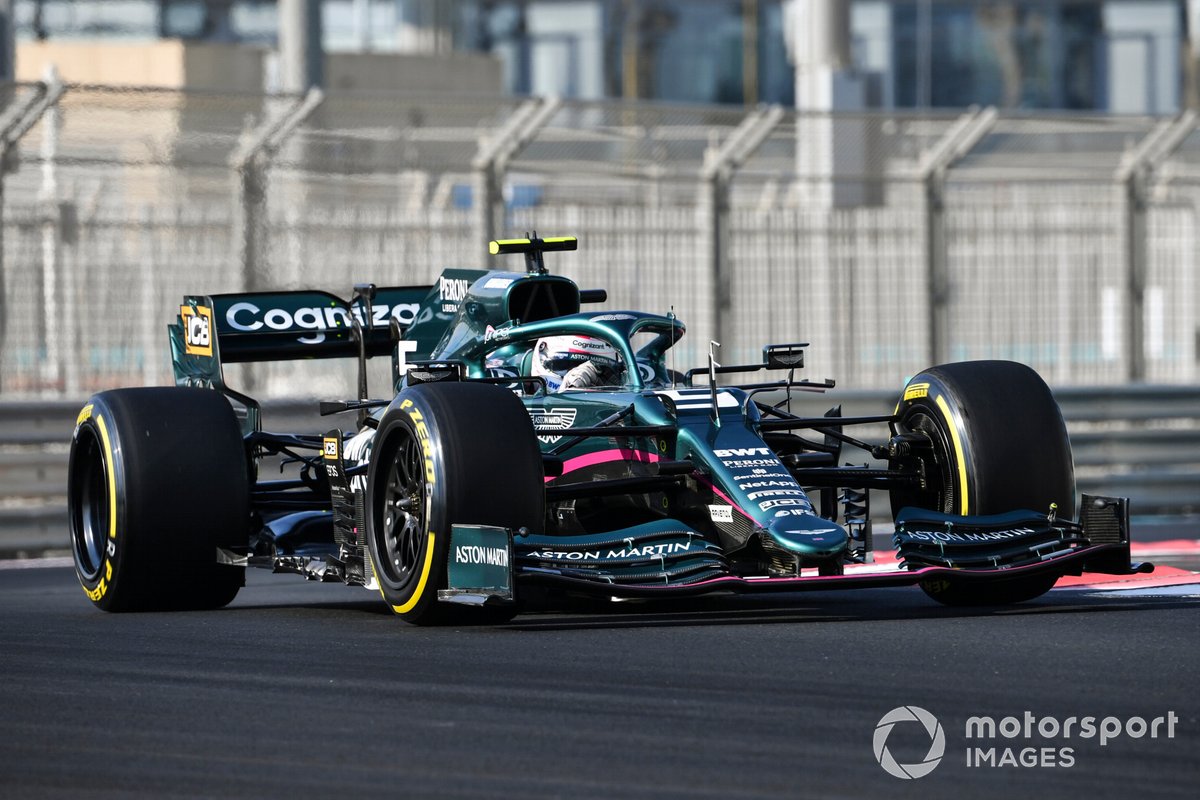 Isola also noted: “Looking only at the grip the tyre is in line with the 13-inches, but they are more consistent because of this new family of compounds, and the way in which we have designed the compounds."

One big difference between the mule cars and the definitive 2022 machines concerns the brakes and the drums that surround them.

“We have asked the teams to use maximum cooling for both front and rears,” said Isola. “Because looking at the simulations next year with the flows that are going inside, they shouldn't be able to use the heat coming from the brakes to heat the rim.

"There is a lot more space, but also the brakes are designed with different flows. Now we are also evaluating another characteristic of next year's brakes, because between the rim and the brake you have a space where you have air at a certain temperature, so depending if you seal that or not, you can have different temperatures.

“But this year during the tyre test, we told them to use maximum cooling. The point was that starting from 21.5 psi front but with a blanket temperature that is is 30 degrees lower compared to this year, the pressure increase was quite high.

“So basically the running pressure - I don't tell you the number because I don't want to release confidential information from any team - but consider that they were running a good number of psi, 4-5 psi higher than the starting pressure, because of this delta in the blanket temperature.

"Next year with a new type of drums, a new type of brakes, I believe they are in a much better position to control the heat that is going from the brakes to the tyre and also the blanket temperature that is starting at 70."

Another novelty for 2022 will be rim covers: "Some teams decided to test the rim cover in some runs, but these tests are not really representative. First of all, because the brakes are not the 2022 brakes.

“So, if you fit the wheel cover, you have the temperature that is increasing quite a lot, and the heat exchange between the brake and the rim is not really manageable, as they will do next year with the new brakes that are not transferring the heat from the brake to the rim.” 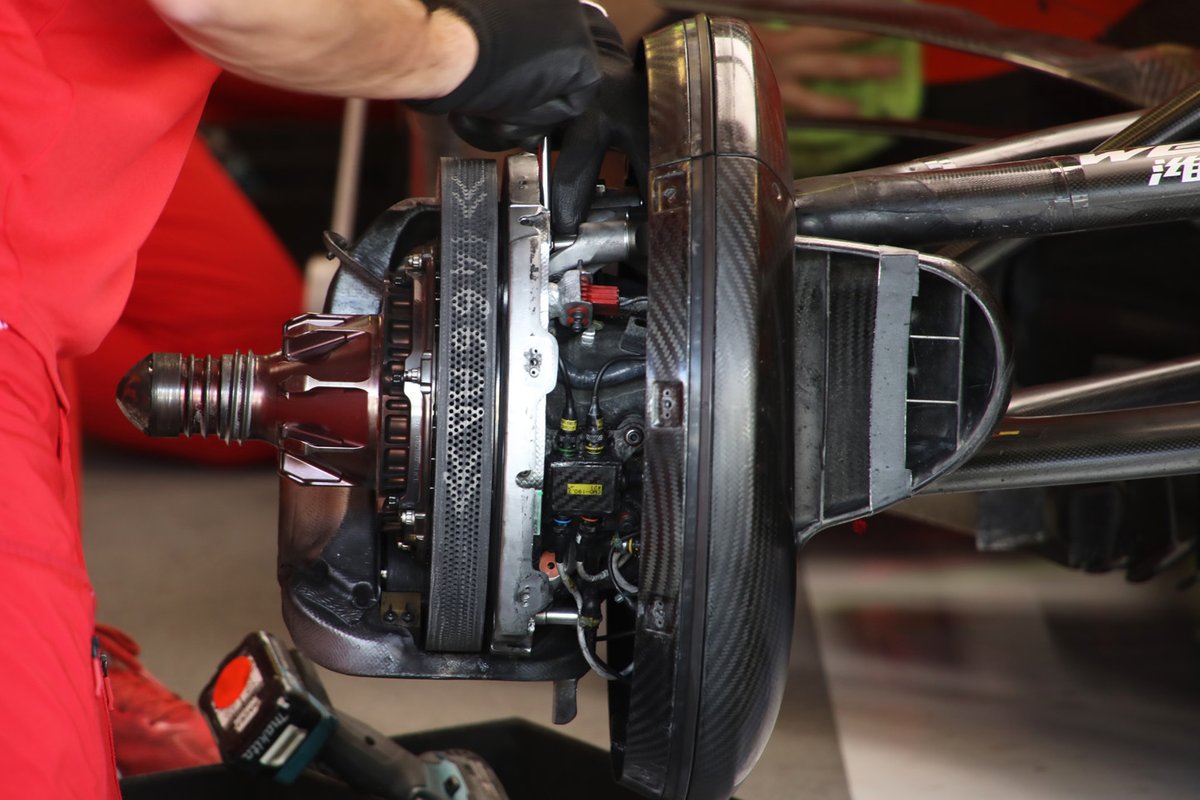 One of the main targets for the 18-inch tyres was to reduce problems with overheating, a characteristic which has bugged Pirelli for years, and left drivers frustrated. Isola is confident that the company has addressed the issue.

“The drivers commented that they can push,” he said. “Let's take the C3 as a reference, that is probably the more representative, the level of grip is good. And they can push without having overheating or degradation, or better than the 13-inches tyre.

“Honestly, I'm curious to see how the tyres work on next year's cars, because I believe they are different also, the the aero package is so different. Also, the level of downforce that you have at different speeds will be different. So we need to understand how they work with the new aero package.

“Probably, I can imagine that they will have less downforce in slow speed corners, and higher downforce at high speed. And so that is making a change in the balance of one lap.

“And this is impossible to test with the mule cars, because they have the same configuration used when they have been designed, so they don't have the ground effect that is on the new cars.”

So aside from the aforementioned understeer, what else did the drivers discover?

“They reported a very good straight line traction. In some cases some snap oversteer, that is in line with the fact that with the understeer you tend to use more steering angle, and when you lose the grip from the rear, it's more snappy. So it's quite coherent with the other comments.”

Cars that are more difficult to drive? That gels with comments from drivers who have run the new models in simulators. And that kind of challenge can’t be a bad thing...