What makes Bottas the right choice for Mercedes in F1 2017 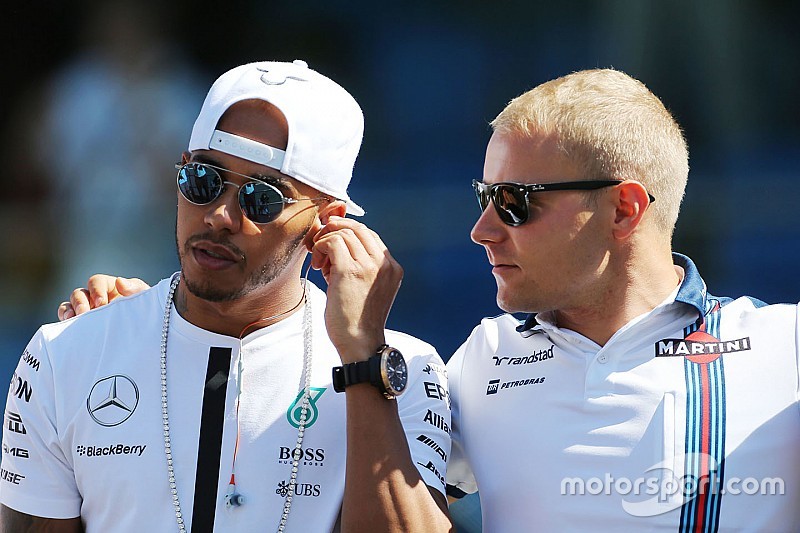 Mercedes wants a quick, consistent and non-political driver to replace Nico Rosberg and partner Lewis Hamilton in Formula 1 2017. Is that man Valtteri Bottas… or not?

When Nico Rosberg announced his shock retirement from Formula 1 2017, not only did it catch his Mercedes team by surprise, but also the entire driver market.

A few months earlier, much had been all up for grabs. For instance, it was the chance Nico Hulkenberg had been waiting years for – just weeks after he’d confirmed his move to Renault. They could even have just re-embroidered his #27 over the #6 on the ‘Nico’ team merch. Doh!

More seriously, Mercedes clearly needs a fully-rounded driver line-up if it’s to keep its streak of F1 Constructors’ Championship titles going. Its Rosberg/Lewis Hamilton pairing might have caused a few headaches along the way, but it was an effective and well-balanced partnership that stayed (mostly) on the right side of the Senna/Prost or Villeneuve/Pironi implosion.

When Rosberg dropped his bombshell, I can guarantee you that everyone from Sebastian Vettel, through Fernando Alonso, Daniel Ricciardo and Max Verstappen, would have had their lawyers examine the fine print on their contracts. Yet it seems that they’re all locked in, water tight. And while contracts can be broken and bought out, I don’t think it’s Merc’s style to turn pirate on a major rival for a superstar driver.

If Mercedes doesn’t think its junior Pascal Wehrlein, 22, is ready to go toe-to-toe with three-time champion Hamilton – and you don’t have to be mastermind to work out why after only one season in a Manor – then Williams’s Valtteri Bottas is the clear number one choice as replacement.

He is 27, and thus at the peak of his powers. He’s raced in F1 for four seasons, finishing in the top four in the championship in 2014, and he’s scored over 400 points from his 77 starts. He’s won titles in the junior categories, most notably GP3, and his approach has shown few flashpoints or any signs to show that he’d be a disruptive force in any team.

I can’t think of another such easy-going, plug-and-play driver more suited to a seamless team switch, apart from fellow Finn Kimi Raikkonen. We’ve only seen glimpses of how good Bottas really is – Canada qualifying in 2013, and then that run of European races in 2014 when he scored four podiums in five races – yet he risks stagnating at Williams after four seasons (five if you include a second of Friday running).

Of course, like almost everyone else (unless Mercedes entertains the notion of signing Felipe Massa, Esteban Gutierrez, Felipe Nasr, Rio Haryanto or, er, Pastor Maldonado) he’s under contract.

But Williams is a ‘friendly’ team, given Mercedes supplies its engines, and it would surely benefit with subsidised motors and a decent replacement in Wehrlein (although two young drivers perhaps isn’t totally ideal).

Buying that contract out might take a few weeks of lawyer time. And it’s significant that, just like a 'not guilty' verdict in a court of law, the longer the decision takes, the more likely it’s not going to be Wehrlein. Ask yourself this in deliberation: would you take a driver with nine podiums in F1 or none?

But ask yourself too: is Bottas a bit of a boring choice? When has he ever shown the kind of spark that might take the fight to Hamilton, keeping him on his toes if Red Bull and Ferrari get their house in order and ace the 2017 rules revolution? And, since the 2014 rules came into play, he’s scored less and less points each season…

It might need someone who can lead the team, if Lewis goes into one of his occasional fugs, but Bottas has certainly proved he can do the former at Williams.

Williams will no doubt resist the initial approaches to buyout Bottas’s contract – to a point. But like an unsettled footballer, when Barcelona or Real Madrid come calling, resistance is futile in the long run. Get as much out of the deal as possible, and move on. You don't want to be saddled with a want-away driver.

The first curveball I can see is Sergio Perez. We endured a bit of a saga while he was re-confirmed at Force India, with a number of contractual issues needing to be resolved. Might Perez’s principal backer, Carlos Slim, just fancy his Mexican superstar in a title-contending car next year? Might there be a few extra contract exit clauses in Perez’s deal than usual?

While Perez’s McLaren adventure didn’t work out, he knows what it’s like to race for a giant team. But this surely throws up a ‘damaged goods’ flag, despite the impressive, tyre-stroking consistency he’s shown at Force India and Sauber before and since.

Actually my favourite wildcard choice here would be Carlos Sainz. We’ve seen enough of him to create a really positive impression.

The Max Verstappen freight train reminds me very much of how Hamilton sidelined others on the McLaren-Mercedes ladder a decade ago, and perhaps the best thing that Sainz can do is admit defeat on the Red Bull staircase – as Ricciardo and Verstappen look set for a Vettel/Webber-like run. Maybe it’s time to jump ship?

He’s already stacked up well to Verstappen, and kept Daniil Kvyat in the shade. In a perfect world, given a clear run at signing a ‘second number one’, you’d have expected Merc to go out and grab Alonso. Well, how about taking what looks to be his spiritual Spanish successor?

So who’s it going to be: Bottas, Wehrlein, Perez or Sainz?

My heart says go and poach Sainz out of his Toro Rosso contract – which is much different than wresting Ricciardo or Verstappen away from Red Bull – and let’s have some real fun in 2017.

But my head says Bottas. He’s a top driver in waiting, and his time has finally come.

Analysis: Why All roads lead to Williams F1