Alfa Romeo continued the theme of Formula 1 cars being more evolution than revolution this year when it unveiled its updated C41 in Poland on Monday. 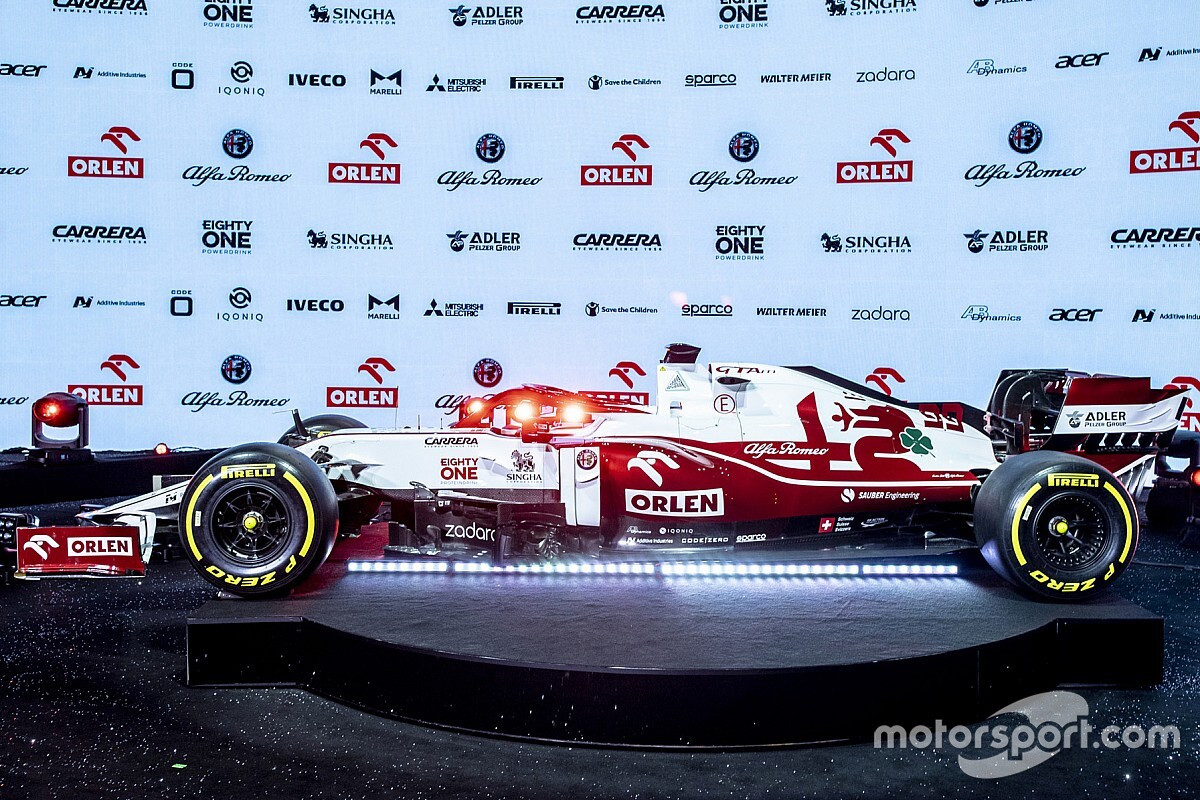 It's clear that the team has focused its resources on recovering the loss of downforce created by the new regulations for the season ahead, with the necessary changes made to the floor, rear brake ducts and diffuser.

However, perhaps the most interesting aspect of the C41 lies in the team's redesign of the car's front end, with a new front wing, nose and brake ducts all looking to set up the airflow differently to the car's predecessor.

In order to achieve its design ambitions, the team has had to spend its two allotted tokens on redesigning these aspects too, so the pay-off needs to be sizeable. In this respect, the nose sees the team switch tact.

The main body of the structure has been slimmed considerably, with the design now much more reminiscent of a trend started by Mercedes back in 2017. This is allied to a rethink at the front of the structure too, with the shape of the nose tip and its inlet altered and the two higher inlets present on the C39 cast aside. 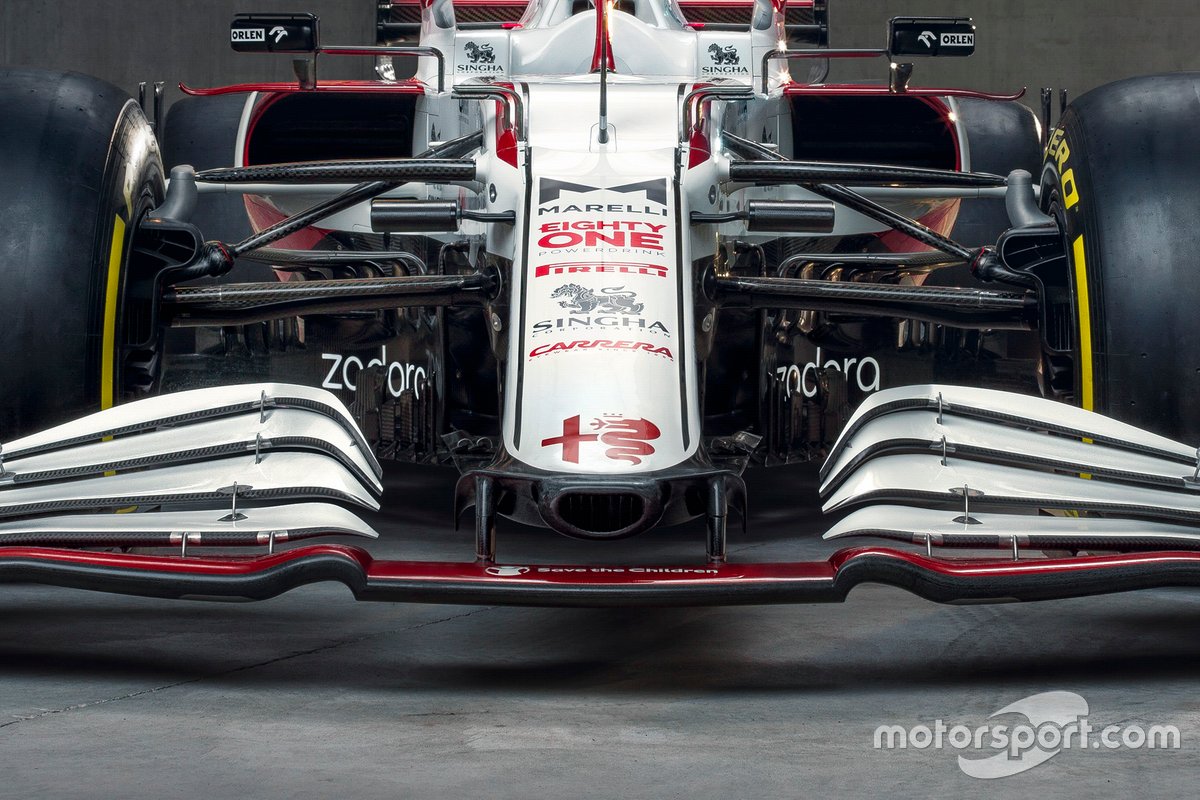 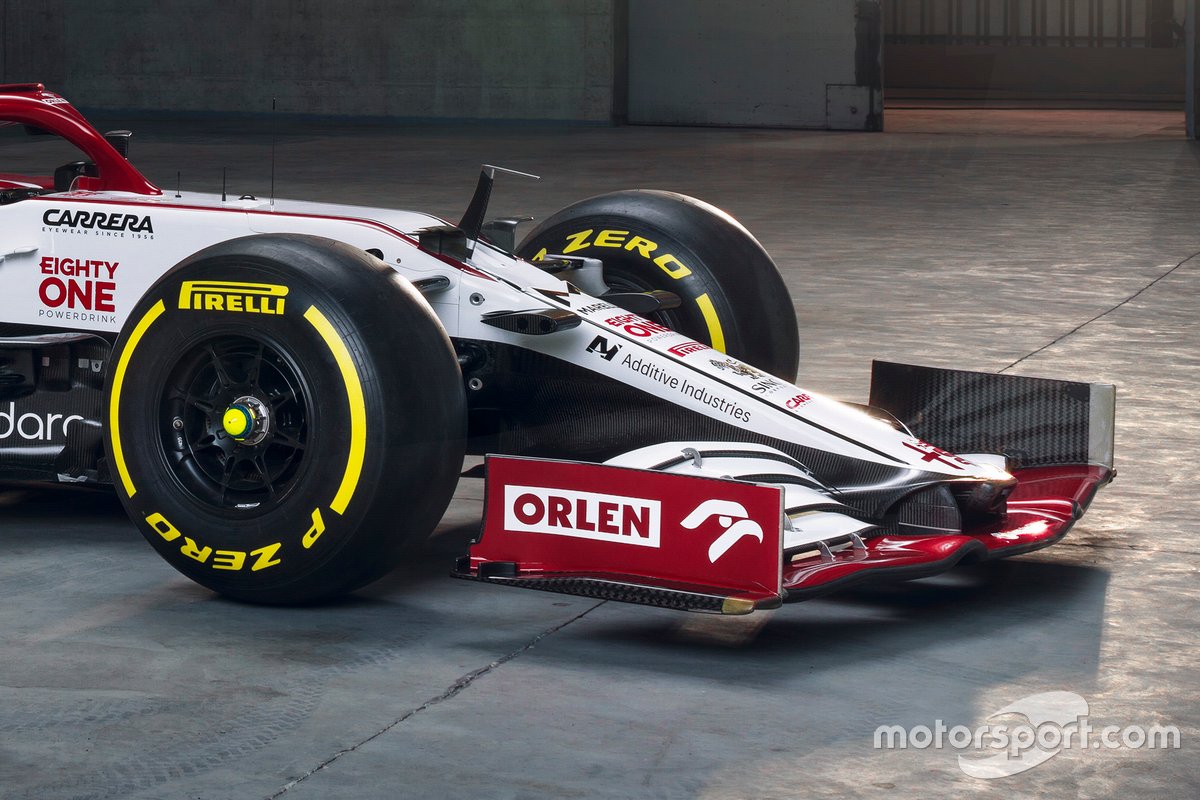 These revisions have also led to a new cape, which has been brought forward on the body of the nose in order that it might influence the airflow that bit earlier than before.

There appears to be an interesting shape to the underside of the nose in the section between the nose tip and the edge of the cape too. This may be the reason why the team has opted not to use the narrow wing pillar arrangement that is more commonplace with this overall design concept.

However, it's unclear at this stage whether it's simply a pathway for the airflow to follow before entering the 'S' duct that remains a feature of the car or whether it works with the cape to further influence the airflow's ongoing transit toward the bargeboard cluster. 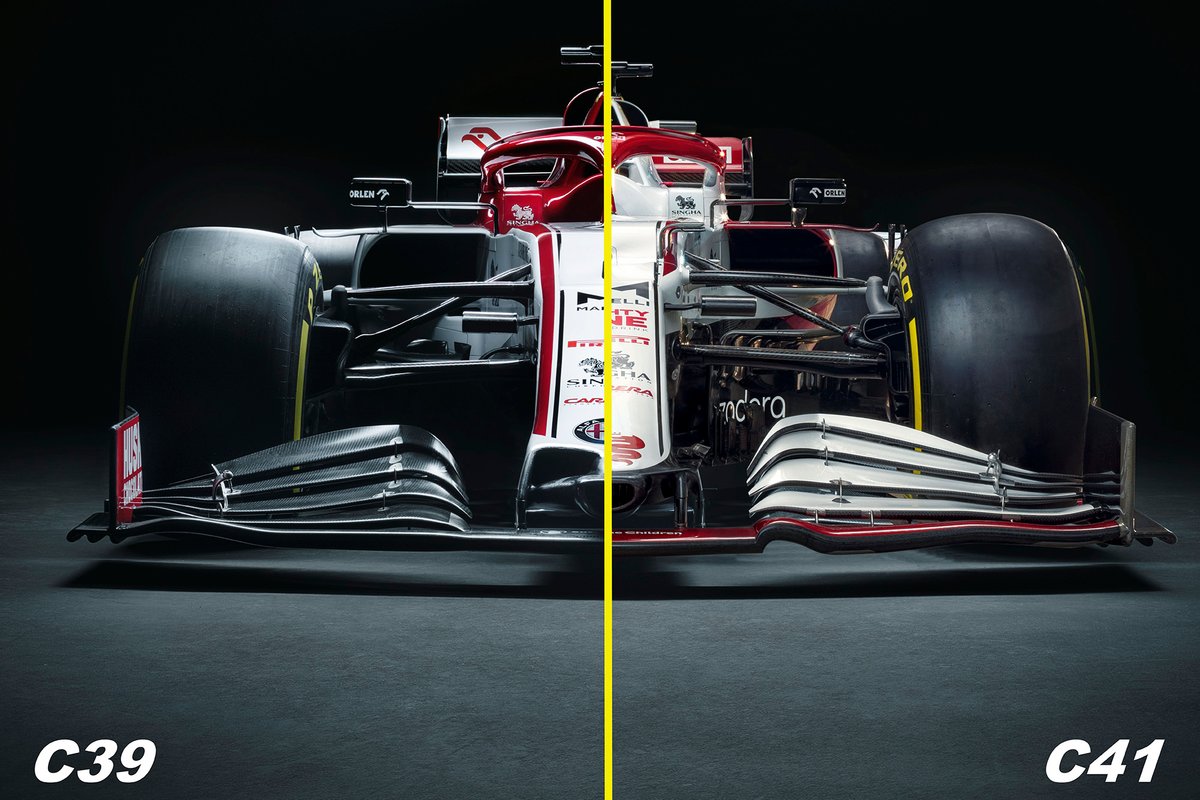 Alfa Romeo has been steadfast in its approach to the front wing regulations that were introduced in 2019, favouring the unloaded outboard section of the wing to influence the wake generated by the front tyre behind.

However, it has made some significant changes to the inboard section of the wing for 2021, with the mainplane now featuring a very bold arc where it meets with the neutral section.

It's an area where the team had made some limited changes toward the end of 2020. But this more aggressive variant will clearly drive the Y250 vortex in a very different way and is the result of the new much bolder cape design being able to keep the vortex in check.

There's also a dipped section on the leading edge of the central portion of the mainplane, which is another aspect that was played around with toward the back end of last season. But again the new design is more prominent, indicating the team's wishes to drive more performance from that region of the wing.

A revised brake duct is also visible at the front of the car, with the team switching to a design more akin to the one used by Mercedes, with an inverted L-shaped inlet divided into multiple channels that feed the various cooling and aerodynamic demands of the internal duct work.

Meanwhile, the upright extension which raises the position of the upper wishbone also appears to have been modified slightly, perhaps as a response to the revised tyre profile that Pirelli will supply for the forthcoming season. 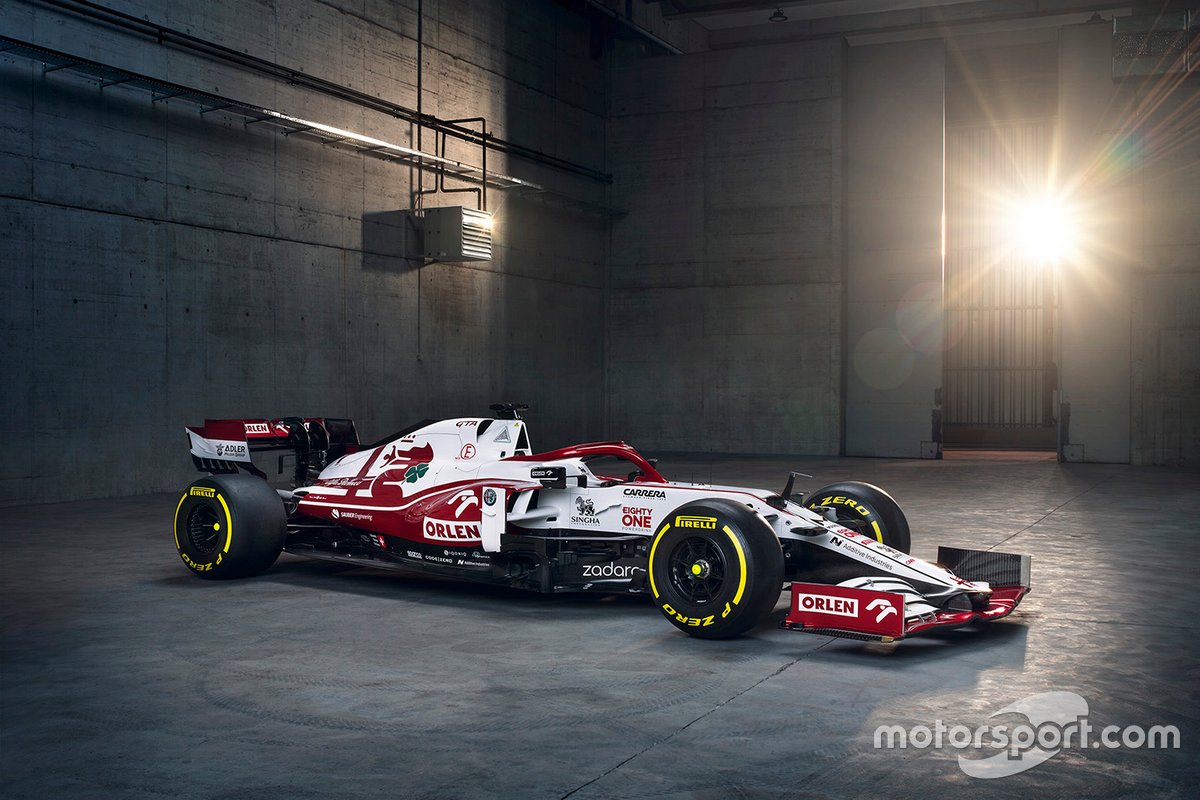 The C41 retains the distinctive triangular airbox and displaced circular snorkel arrangement of its predecessor, with the configuration allowing the team to package some of the radiators and other ancillaries associated with cooling around the power unit.

This results in a smaller sidepod arrangement, albeit the proposed improvements from Ferrari don't yet appear to have allowed a significant reduction in their size, something that's more noticeable if you were to compare the size of the rear cooling outlet with some of the other cars we've seen so far. 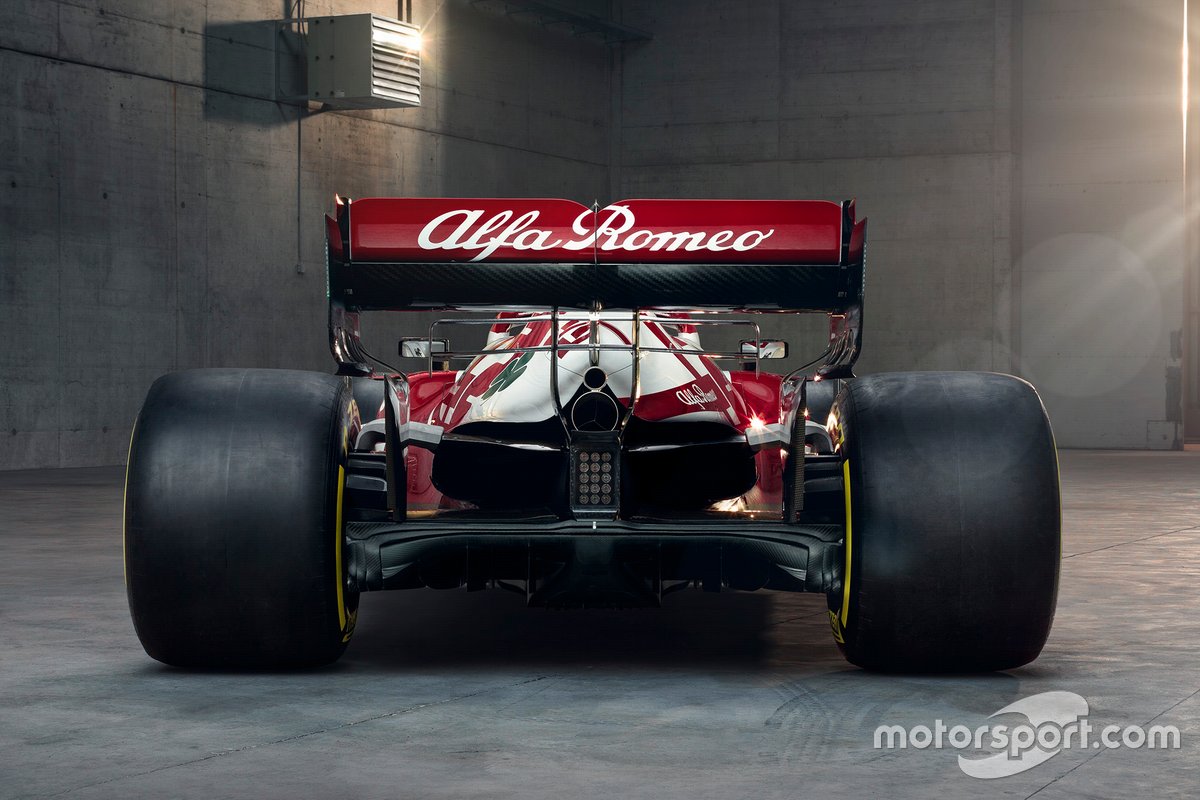 There's still a number of design aspects of the car that we are yet to see in their finished form too, with the floor being bought up to 2021 spec in regards of the cutout. For aside from a small lip ahead of the tyre it's devoid of the type of aerodynamic furniture we might expect to see when the car hits the track.

Nonetheless it's also good to see that designs introduced throughout last season have a stay of execution too, proving that sometimes the 'if it ain't broke, don't fix it' approach is the right one. The low shark fin, tall swan-neck rear wing pillars, countered rear wing endplates and strake design all testament to this so far. 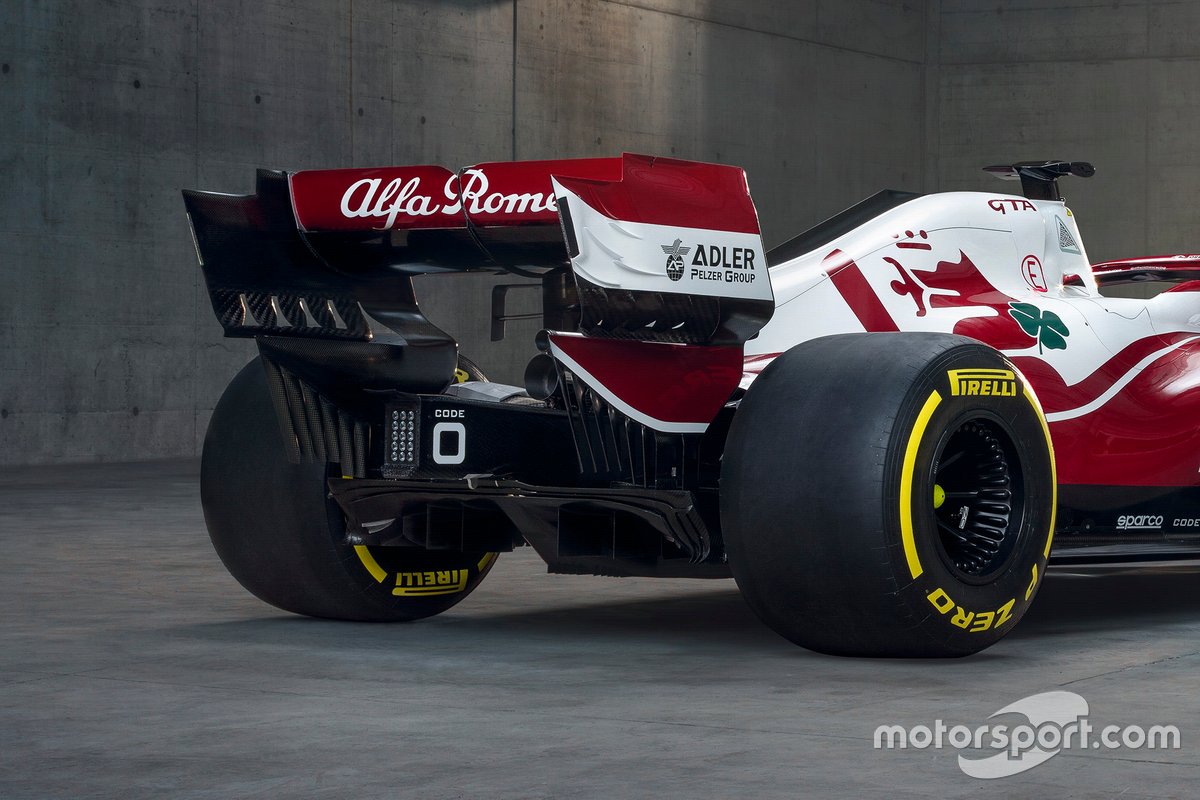 All things being equal, the C41 looks to be a step forward when compared directly with the car that finished the 2020 campaign.

Most of the team's effort focused on the front end of the car in order to unlock the latent potential aft of it. However, it will be interesting to see how quickly things evolve when the car completes its shakedown and filming day on Friday before being put through its paces during the pre-season test in Bahrain on 12-14 March.