When Red Bull found its way out of F1's midfield and joined the hunt for wins, tensions between Mark Webber and Sebastian Vettel began to flare. The first of those fall-outs came in the 2010 Turkish Grand Prix during a high-speed tangle for the lead...

Mark Webber enjoyed a long, largely-successful Formula 1 career that came to an end in 2013, but one in which he just fell short of becoming world champion.

Despite playing a key role in Red Bull's run of four constructors' championship wins from 2010 to 2013, Webber was left very much in the shadow of teammate Sebastian Vettel - a feeling that only grew with each season that went by.

While Vettel would comfortably beat Webber in 2011, '12 and '13, their second season as teammates - 2010 - was a much more even fight. Webber led the championship standings longer than any other driver, ultimately falling 14 points off Vettel after his late-season surge.

But tensions were already brewing between the drivers - and between Webber and Red Bull - with the first spill-over coming at the 2010 Turkish Grand Prix, 10 years ago today, as they clashed on-track.

Webber arrived at Istanbul Park riding high after back-to-back wins in Spain and Monaco. He had led every lap of both races from pole position, putting him into the lead of the championship. But that would be the high point for the Webber-Red Bull relationship.

"It was really the remarkable four-race sequence in the middle of 2010, from Istanbul through Montreal, Valencia and Silverstone, that signalled the beginning of the end of my positive feelings for Red Bull Racing," Webber wrote in his autobiography, Aussie Grit.

"F1 fans will remember Turkey that year and the infamous coming-together between Seb and me as we tussled for the race lead. The day before that happened, I got wind that matters might be conspiring against me."

Red Bull had managed to get a new-spec rear wing to Turkey in time for final practice after opting to not use an F-duct on its car from Saturday onwards. But with only one available, the team decided to put it on Vettel's car instead of Webber's. Webber was made to wait until qualifying to get his first run with the new rear wing, but duly put his car on pole for the third race in a row as Vettel could only manage third on the grid. 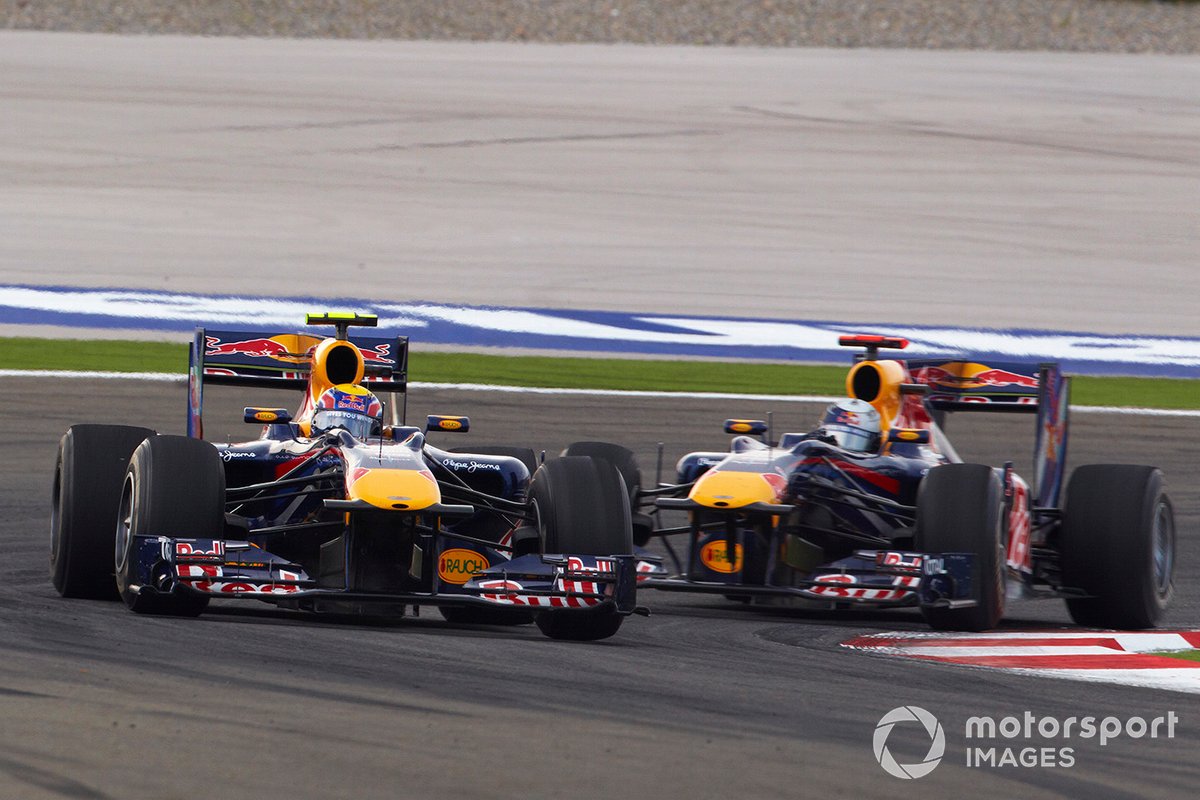 Webber held onto his lead at the start, but couldn't break free from McLaren's Lewis Hamilton behind, who in turn had Vettel following him as well. Hamilton and Vettel had both been saving some fuel while tucked into slipstreams of the cars ahead, but Webber had the more valuable track position.

Red Bull opted to give Vettel priority in the pits in a bid to get him ahead of Hamilton, bringing the German driver in on lap 14. He was fitted with a set of prime tyres that would see him to the end of the race, 2010 being a year where strategies rarely varied due to the long-life nature of Bridgestone's compounds.

Webber and Hamilton both reacted one lap later, coming into the pits together. While Webber was able to retain his lead, Vettel had got ahead of Hamilton. Jenson Button tried going long to join the fight, but remained fourth after pitting, albeit just a couple of seconds off the race lead.

In need of a fuel save to make it to the end, Webber was instructed to turn down his engine and ease his pace. "I did, but I made a point of asking about Sebastian's status on fuel," Webber wrote. "He was fine. I was the guy who led, and who suffered. That's what Seb had in his top pocket, and he planned to use it when he could get a run at me."

With traffic and light rain complicating matters, Vettel closed up on the rear of Webber's car on lap 40. He was tighter through Turn 8, and after a better exit out of Turn 10, got a run on his teammate as they came through the Turn 11 kink.

Webber held to the right-hand side, opening the door for Vettel as he thought a few corners ahead. But Vettel's car then drifted towards Webber, causing contact between the two drivers.

It sent Vettel into a spin, his car narrowly avoiding clattering into Webber a second time. Vettel raised his arm from his cockpit before even coming to a stop, then hopped out of his car to look at the damage behind. Helmet still on, he made the 'crazy' sign by circling his finger next to his temple, then repeated the gesture for the cameras to see a second time once his helmet had been removed.

Webber managed to get his car back into the pits for a precautionary stop for a new front wing and tyres and returned to the action in third place. He nearly had the victory handed back to him as a miscommunication almost caused the McLaren drivers to collide, only for the team to rescue the situation and allow Hamilton to lead home Button for an unexpected 1-2 finish. 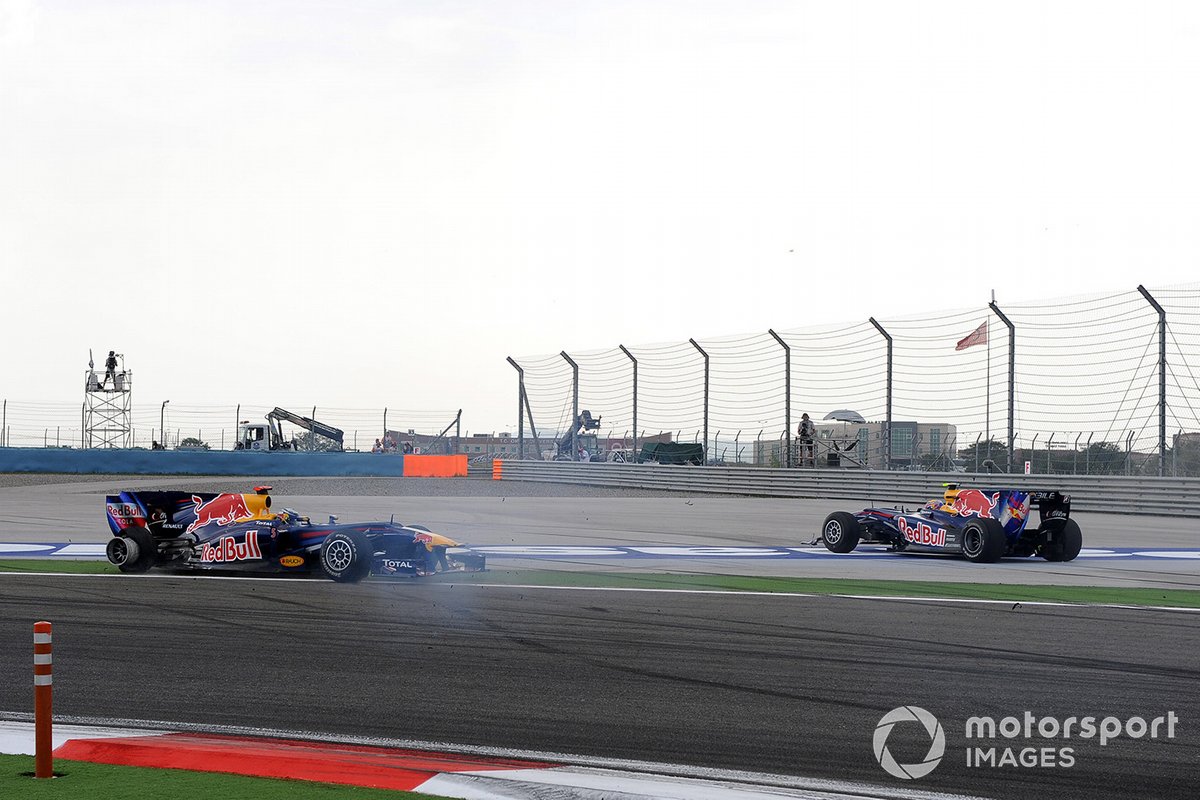 Webber was thrust into the FIA press conference before even getting a chance to speak to his team about the incident. By this point, team advisor Helmut Marko had already been having his say, claiming Vettel "had to attack" and pinning the blame on Webber. As time passed, team principal Christian Horner appeared to shift towards Marko's view, leaving Webber left feeling isolated by his own team.

"When I saw on the TV the hugs Sebastian got on the pit wall from the team, I began having serious doubts as to who was really pulling the strings at Red Bull Racing," Webber wrote.

Horner stressed at the time Red Bull would avoid a driver fall-out, telling Autosport: "The most important thing, and I have had this situation before with drivers in different formulas, is to get issues out into the open, deal with them and that is exactly what we will do here."

But that was immediately contradicted when Vettel was excused from Red Bull's post-race debrief, denying Webber the chance to talk to his teammate about the incident. While Webber was satisfied to have the moral high ground, he had little chance to fight his corner.

It prompted Webber to write a long letter to Red Bull owner Dietrich Mateschitz a few days later over the incident and how it had been handled. "Factions within the team had adopted an immediate stance and spoken to the media apportioning blame for the incident firmly on me before facts had been established," Webber told Mateschitz, expressing his disappointment in "a lack of team spirit".

While Mateschitz received Webber's letter well, Horner was left fuming that his driver had gone over his head. But for Webber, it was now "painfully evident that Marko was pulling the strings". Efforts from Webber to talk to Horner about Marko's influence and the true pecking order at Red Bull against Vettel fell on deaf ears.

"I'm sure he must have been asking himself: 'How do I keep them both [Webber and Vettel] happy? I've got to keep Marko happy as well,'" Webber wrote. "Ultimately siding with me and upsetting Marko wasn't an option for him."

It was a situation that Webber's manager, Flavio Briatore, had predicted: "After my back-to-back wins in Barcelona and Monaco, he told us the situation wouldn't be allowed to continue. Not for the first time, he was absolutely right.

"Having a washed-up old Australian dog take the title was not part of Red Bull Racing's plans."

And in the three years that would follow, Webber would never take the title to emulate compatriots Jack Brabham and Alan Jones. Further swings in Vettel's favour followed, one coming just three races later when he again received priority on parts at Silverstone.

By the final big fall-out over 'Multi 21' in Malaysia at the start of the 2013 season, the Webber-Red Bull partnership was already destined to end. But it can be argued that the writing was on the wall from that clash in Turkey, proving where the team's loyalty truly lay. 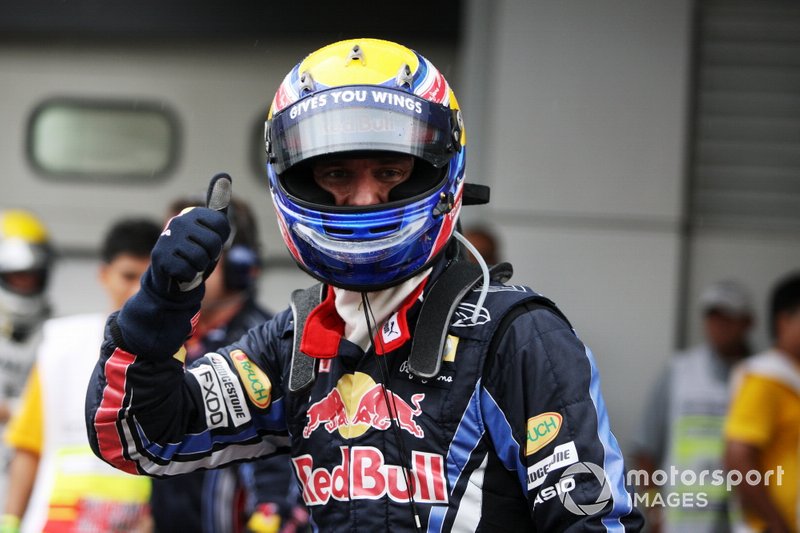