Red Bull confirmed on August 7th that David Coulthard will continue with the team next year and will be partnered by Mark Webber. Webber departs the ailing Williams team in the hope of a competitive Adrian Newey designed Red Bull next ...

Red Bull confirmed on August 7th that David Coulthard will continue with the team next year and will be partnered by Mark Webber. Webber departs the ailing Williams team in the hope of a competitive Adrian Newey designed Red Bull next year. 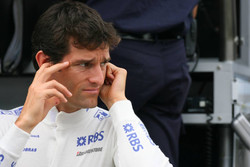 "It's fantastic to be joining Red Bull Racing," said Webber in a statement. "It's clear that the team is very hungry for long-term success, it has a very talented group of personnel and there seems to be a real sense of team spirit and unity. I believe I'm joining the team at exactly the right time for success in the future."

Red Bull Sporting director Christian Horner commented: "We chose him (Webber) for a number of straightforward reasons. One, he obviously has undoubted speed and ability, and two, he appears to have the determination and motivation needed to succeed."

"We're entering an exciting new phase in the short history of Red Bull Racing and Mark was an obvious candidate for us. He's got a good track record in F1 and we're delighted to have secured his services for next year."

It's uncertain where Christian Klien, whom Webber replaces, will go. The Austrian is contracted to Red Bull until the end of this season. "I would like to take this opportunity to thank Christian Klien for all his hard efforts for the team over the last two seasons," said Horner.

It seemed that the driver market hinged on Michael Schumacher retiring or not but, like the rest of us, apparently drivers are bored of waiting and are forging ahead with their own plans. Williams already confirmed that team tester Alex Wurz will replace Webber next year.

Webber joined Benetton as test driver in 2001 and went on to race with Minardi in 2002. On his competition debut he scored fifth place in Melbourne, a home result that thrilled the Aussie crowds and team principal, also Australian, Paul Stoddart.

Webber also tested for Jaguar in 2002 and signed to race for the Leaping Cat in 2003. He stayed with the team for 2004 then moved to Williams in 2005. The partnership of Webber and Williams was much anticipated but it didn't happen. Williams has struggled the last two years and Webber failed to shine.

Optimism is high -- don't hold your breath -- for the Newey designed Red Bull in 2007. Newey has an impressive record of designing championship winning cars, Williams and McLaren, but that doesn't automatically give Red Bull an advantage next year.