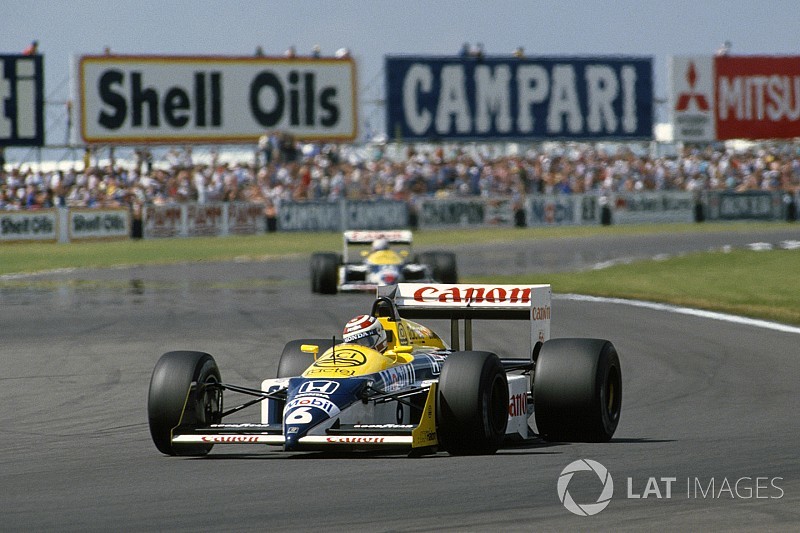 Nigel Mansell has described his epic pursuit of Nelson Piquet to win the 1987 British Grand Prix in great detail in a new interview for Motorsport.tv.

In the latest episode of ‘The Windsor Interviews’, the 1992 Formula 1 world champion sits down with host Peter Windsor for an extensive conversation about his career.

In this clip taken from the show, Mansell talks about seeing a “Mexican wave” ahead of him around the track as he chased down Williams teammate Piquet after pitting for fresh tyres.

“I was being told to slow down, I was running out of fuel,” said Mansell, who famously won the race following a dramatic pass on the Hangar Straight.

“The pit board wasn’t very visible as I went past – because I wasn’t looking at it!

“I knew, because Nelson was no mug, that I would have one chance to get past him.

“I had to do the dummy, and I had to be on the inside, because I knew he would come straight over.

“He came over and we touched going into Stowe, but he knew he was on the outside so he was going to come out far worse than me.

“When you do a move like that you have to be committed. If you do it half-hearted, it’s an accident.

“You had to time it perfectly that when he moved one way, you had the slipstream to shoot [the other way], so by the time he looked back you’re already there.

“When he did that and realised that I hadn’t gone that way but I’d gone [the other] way, he wanted to come straight back but I was already there, and that was the key.

“If I hadn’t been there, then he would have closed me straight out.”