Vettel wants to discuss clash with Verstappen in private

Sebastian Vettel wants to speak to Max Verstappen in private, rather than get involved in a public war of words, about his defensive driving in Formula 1.

The Ferrari driver felt that his Red Bull rival had been too aggressive in trying to hold on to third place in the Japanese Grand Prix as he tried a move down the inside at Spoon Curve on lap nine.

With Verstappen having also clashed with Kimi Raikkonen on the opening lap of the race, Vettel believes that a conversation with the Dutchman is needed.

"He is quick, but it doesn't help also the way he came back onto the track with Kimi," said Vettel, when asked about Verstappen's attitude to racing rivals.

"I don't want this to end up as 'Seb says this, Max says this'. I will talk about it with him when it is the right time, so this way I would prefer.

"But you ask me these questions so I give you my answer."

Vettel remains adamant that his move at Spoon Curve was not overly ambitious, and dismisses suggestions he should have waited for a better moment knowing that Verstappen already had a five-second penalty for the Raikkonen incident.

"What do you think about how many times you can afford to wait?" he told reporters. "Obviously I am racing not just him. I am racing also the guys in front ideally.

"His battery was derating. I saw the light flashing, I saved up my battery on the way up through the Esses trying to stay close, and I had a good exit from the hairpin. I had a big tow through Turn 12, and was side-by-side when we hit the brakes and turn in.

"I had similar encounters with others and we managed to make it through the corner.

"It is not the prime overtaking spot, but if you are side-by-side then I think it is fair in that scenario and that occasion. I did my best to try to avoid contact but if he kept closing then where am I supposed to go?"

Vettel thinks that Verstappen had enough opportunity to avoid the accident, and reckons the Dutchman even came off the brakes to try to make things more difficult.

"The problem was that as soon as he saw I was side-by-side, he opened the brakes, and tried to push," he said. "But I think that is wrong. I don't think he makes the corner either.

"He just looks at me, but he should keep the overview of the track and we should both try to make the corner in the first place, and then work out who is inside/outside." 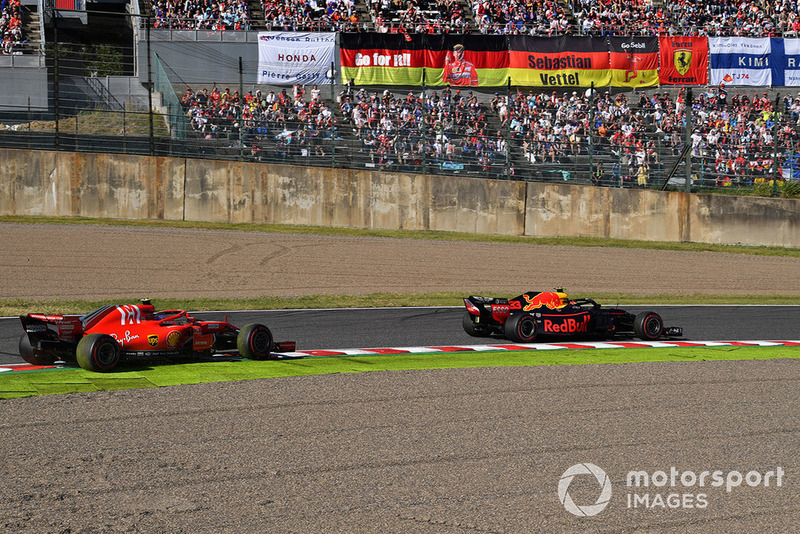 Ferrari's self-sabotage is handing 2018 to Mercedes

Vettel: Environmental interests must be credible, not for publicity

Anointed as Italy’s next great racing hero after the tragic death of Alberto Ascari, Luigi Musso was pushed out of favour at Ferrari by Peter Collins and Mike Hawthorn. Nigel Roebuck recalls a troubled soul…

From Champ Car to Formula 1, NASCAR, back to IndyCar and now plying his trade in sportscars, Juan Pablo Montoya's career is remarkable for its versatility. Here, the Colombian reflects on 10 of his most significant moments along the way.

Matra’s MS120 married rocket technology to an engine which sputtered out far too often. STUART CODLING examines how the championship-winning constructor’s ambitious project to build car and engine under one roof came to fail

It has been a tricky past few races for Sergio Perez. The Red Bull driver has mustered just 16 points since the British Grand Prix in July and the team's constructors' championship chances have taken a hit. Yet the Mexican remains optimistic that he has all the tools he needs to turn his performances around

OPINION: Carlos Sainz was one of the stars of the 2021 Russian Grand Prix. But he came into the weekend with a streak of recent crashes hanging over him. Here’s how the Ferrari newcomer worked to overcome those setbacks and deliver yet more success for his new team.