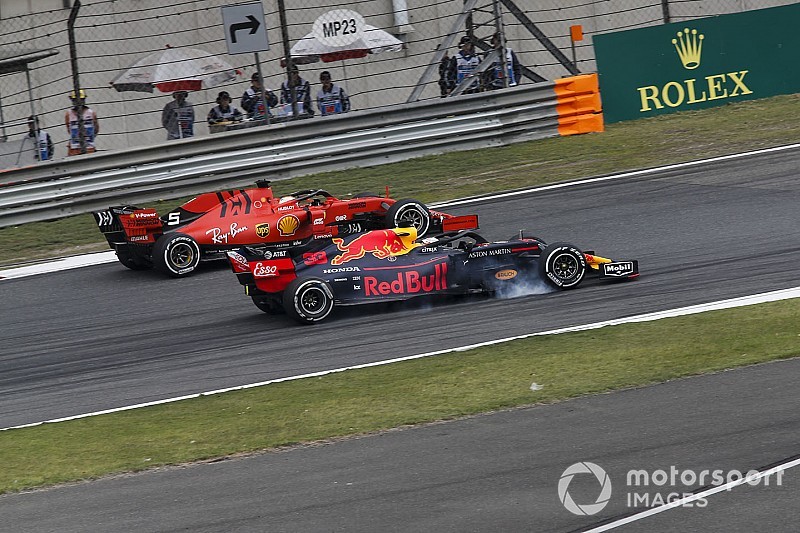 Verstappen was the first leading driver to pit and his pace on fresh tyres allowed him to attack Vettel when the Ferrari stopped one lap later.

The Red Bull driver dived inside Vettel at the hairpin but had a small lock-up, which allowed Vettel to get back past on the exit of the turn keep ahead as Verstappen was forced to the inside for the final corner.

"I saw him coming and the speed delta at the end of the straights is quite big now," said Vettel.

"Knowing Max as well as I do I knew that he will try. I was sort of predicting that he will try and go down the inside and I tried to cut back, and it worked. I had a bit of a moment, I had to open the car a bit, but it was good.

"I could nearly get a car length ahead of him and the angle into the last corner for him wasn't very sexy. It was good fun but we would have loved to be a bit faster."

Verstappen was forcefully edged wide on the exit of the hairpin by Vettel, who squeezed him onto the grass.

However, Verstappen said he would have done the same and explained that he saw passing Vettel at the hairpin as his best opportunity.

"I tried under braking because his tyres were still a bit cold," he said. "Then on the exit he made it quite close, but I mean I would've done the same, so it was alright."

Vettel's third place was his first podium of the season, thanks to Ferrari's struggle in Australia and his spin in Bahrain.

He finished 13s behind race winner Lewis Hamilton, who he trails by 31 points in the championship already.

"I am happy to be on the podium, but it's tough because we tried to stick with them [the Mercedes drivers] but we couldn't," he said.

"They were just too quick right from the start. I had a bit of a race with Max which was good fun but the objective was to try to chase them down. They were too quick for us today so well done to Lewis and Valtteri [Bottas]."