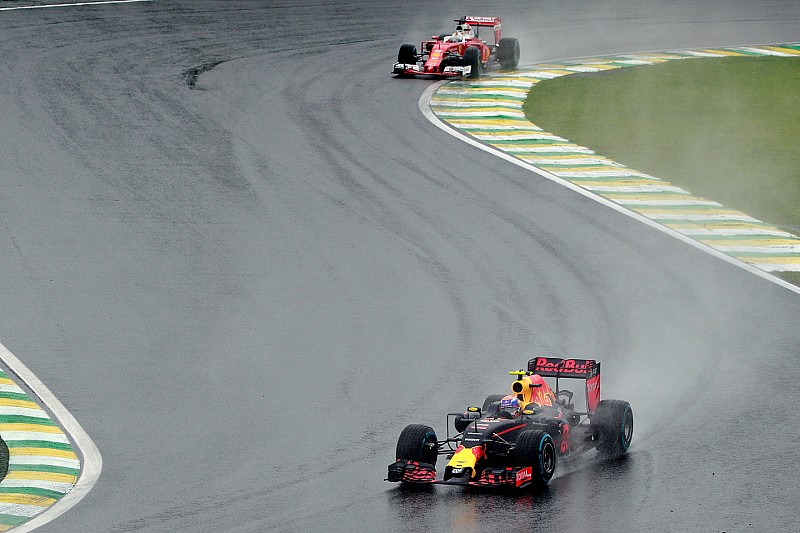 Sebastian Vettel texted Max Verstappen to clear the air after their latest clash at the Brazilian Grand Prix – as well as gauge his feelings on Formula 1’s current wet tyres.

Vettel was angry after the Interlagos event when he claimed that Verstappen pushing him wide at Juncao in their fight for position was ‘not correct’.

But speaking ahead of the Abu Dhabi Grand Prix, Verstappen revealed that his Ferrari rival had been in touch after the race – although it was not just to talk about their incident.

“He sent me a text after the race – but that was mainly about the tyres!” he said. “We are racing drivers and I think he quickly realised afterwards that he couldn’t hold me behind anyway.

“If we were fighting a lot, maybe he could complain a bit more. But it was a very fair move. In Turn 4, he tried to do the same to me but I quickly realised what he was going to do to me so I backed off and I stayed behind.

“So I did the same to him – and overtook him. We were next to each other and he kept going around the outside. At one point I can’t do more because I am on the inside where it is more slippery. And we didn’t really touch.”

When asked if he felt his stunning charge through the field had proven his critics wrong, he said: “I always thought it [my driving] is fine, in general.

“I am always focusing on myself, trying to do the best possible result and race, and that is how it goes. I don’t care about other opinions.”

Verstappen heads into the Abu Dhabi Grand Prix five points behind Vettel in their battle for fourth place in the drivers’ championship.

When asked if it mattered for him if he managed to overhaul the German, he said: “To be honest, it would be nice to be ahead but the first four races I was not in a Red Bull car, so you always lose points already. I can be happy already to be that close.

“If I finish fourth in the championship it is a bonus, but if I finish fifth that is fine as well because at the end of the day it doesn’t make a massive difference. I'm only here to finish first, second I don’t care.”

Regarding Vettel’s messages regarding tyres, Verstappen agreed that improvements could be made – but reckoned it was hard for him to deliver a definitive verdict because he had only ever driven Pirelli wets.

“I think there can be some improvements done, for me it is difficult for me to judge that because I haven’t driven other wet tyres on an F1 car

“For sure it was hard with the standing water but I am sure Pirelli is doing everything they can to give us the best tyres. We have to speak to them and try to work together to get a better tyre.”

Perez unimpressed by sponsor attempt to appease him after Trump row