Sebastian Vettel has denied his spin during battle with Lewis Hamilton in the Bahrain Grand Prix was related to mounting pressure following the multitude of mistakes he made last season.

He spun again while fighting Hamilton for second in Bahrain on Sunday, losing control as he tried to cut back underneath Hamilton’s Mercedes at Turn 4, having been overtaken around the outside.

Vettel flat-spotted his tyres so badly the resulting vibrations shattered his front wing as he tried to make it back to the pits.

Instead of being in position to inherit victory or even second when teammate Charles Leclerc’s engine problem struck, Vettel ended up a lowly fifth.

He lies fifth in the championship after two difficult races, and this latest error has led to suggestions Vettel is increasingly feeling the pressure at Ferrari.

“To be honest I don’t think it has anything to do with pressure,” Vettel said. “I got surprised when I lost the rear that sudden, and once I was in the spin it was already too late.

“Certainly, I had a look at it again. It was my mistake so I need to digest that.

“I thought it was not too bad. During the turnaround [spin], I think the rear left tyre delaminated – Pirelli are still searching apparently where the rest of the tyre is.

“Due to that I had a lot of vibration and when I was going down the straight that caused the front wing to break.”

Williams rookie George Russell was trying to pass Vettel’s ailing Ferrari on the back straight when the wing shattered.

“I've never experienced conditions like that before,” Russell said. “The wind was extremely high - you were having laps down the straight [on which] you were literally being blown across the straight.

“It kind of shows the level of the drivers that not more people biffed it off, and I know Vettel had his moment when he spun but I can totally understand that in the circumstances because it was lap-to-lap.

“The gust of winds were huge, and that had such a huge effect on these cars with this much downforce.”

“I don’t think we should discuss mistakes,” he said. “We need to encourage our drivers because it’s only by driving to the limit that they can achieve the best result.”

Notwithstanding his error, Vettel admitted he has “plenty of homework on my side” after struggling all weekend and consistently falling short of Leclerc’s pace.

Vettel will test for Ferrari in Bahrain on Wednesday as he will hope to find the answers to his pace deficit in the grand prix. 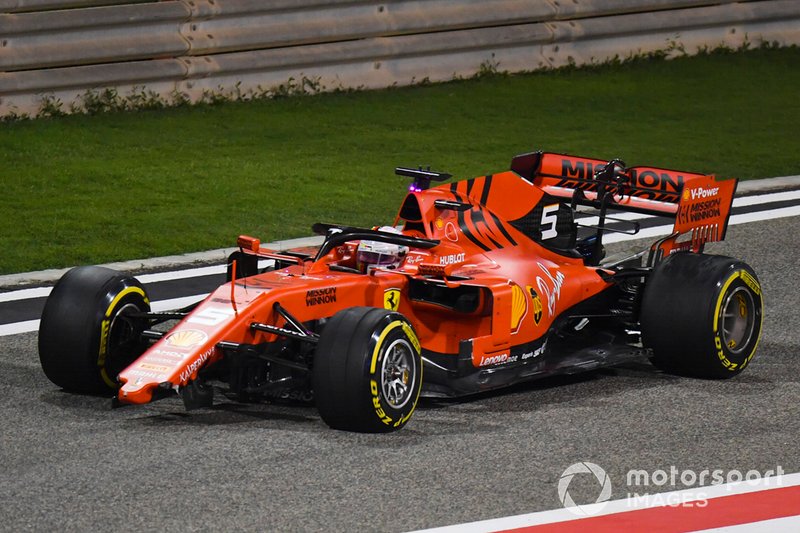 Sebastian Vettel, Ferrari SF90, heads to the pits with a broken front wing