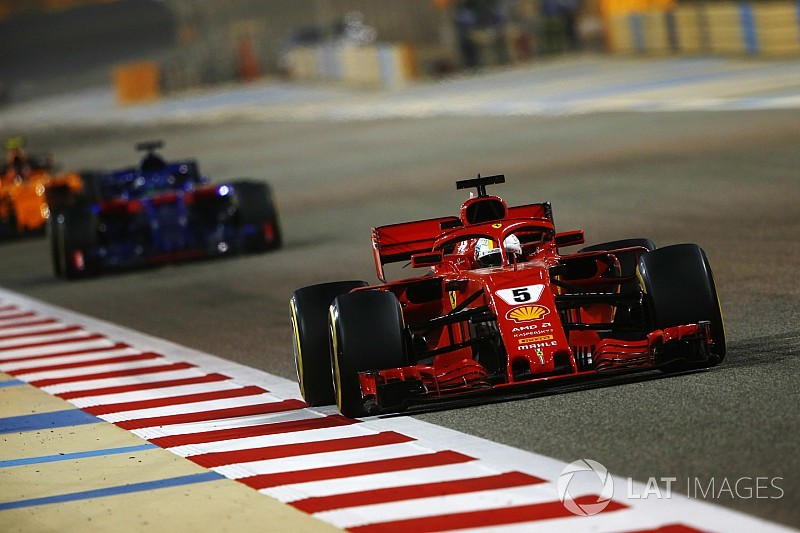 Formula 1 championship leader Sebastian Vettel felt "healthier" in his Ferrari in Bahrain but insists the team must improve despite winning the opening two grands prix of the season.

Vettel followed up a fortunate victory in the Australian GP by qualifying on pole in Bahrain and holding off Mercedes' Valtteri Bottas for the win after a mid-race change of strategy.

When asked by Motorsport.com whether his performance was more down to Mercedes' not being at the same level as in Australia, or Ferrari's own gains, Vettel replied: "It's a difficult one.

"I can't speak for them but I think it's always a combination of things. Probably the circuit came our way. [But it was] mostly the fact I had a better feel with the car.

"We worked on the set-up, [which] helped us to extract more. It was more consistent on one lap but also in the race. So, I felt just healthier and more in control.

"How much they struggled, I don't know. They looked pretty handy at the end of the stints, at least, and in qualifying the gap wasn't massive.

"Overall it's been close but obviously it's good to be just ahead."

Vettel explained after qualifying that Ferrari had targeted improving the front of its car after struggling to match Mercedes in Australia.

He described it as "a bit more difficult to get into the window" and said more work needed to be done because he suspects this year will be very close between three teams.

"It's clear that we need to improve," he said.

"Those three teams and six drivers are very, very close to each other. It will be important to improve and be quick everywhere you go. That helps.

"The quicker you are, the more you are one unit with your car, the happier you feel, the more you're able to extract when it really matters."

Vettel's teammate Kimi Raikkonen had been strong throughout the Bahrain GP weekend but was pipped to pole and then retired from the race after a botched pitstop that left a mechanic with a broken leg.

Raikkonen said his performance did not ease the frustration of losing the result.

"It doesn't matter how good things are unfortunately if you don't finish or score points," he said. "It's obviously far from what I want.

"I had struggled a bit with the rears in the first stint. We changed the tyres, I was taking it kind of easy and still catching up, it was going OK.

"I've been pretty happy all weekend but there's always things to improve and you could have done slightly different and better."